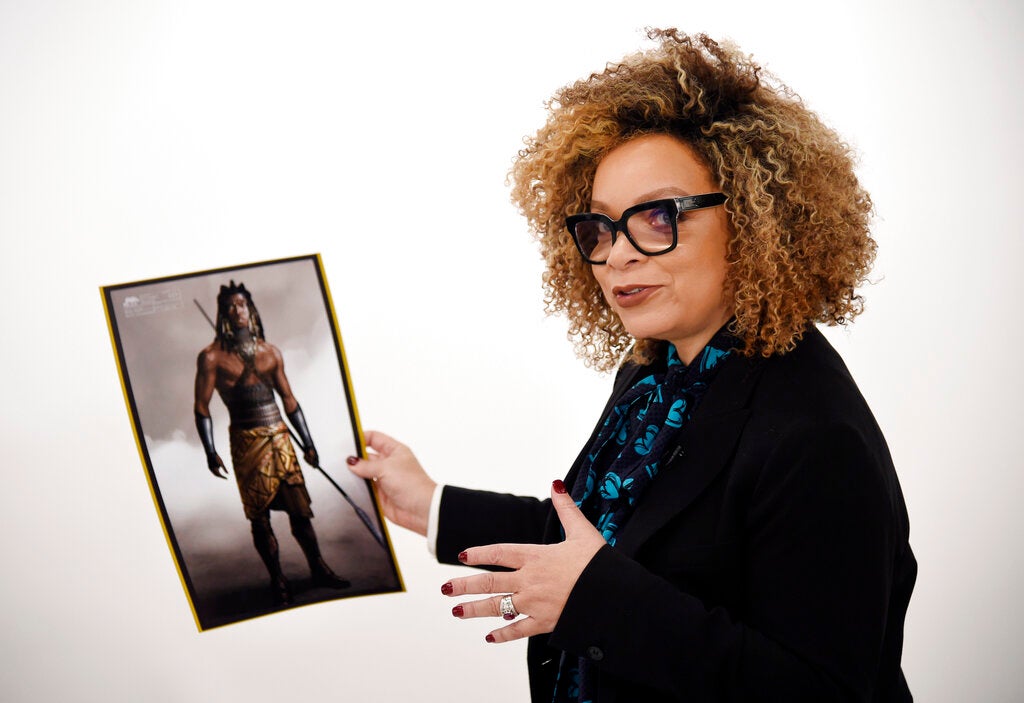 In this Jan. 15, 2019 photo, designer Ruth E. Carter, nominated for an Oscar for best costume designs for "Black Panther," poses for a portrait while holding a photo of one of her designs in Los Angeles. Carter will also be honored for her illustrious career at the 21st annual Costume Designers Guild Awards on Tuesday in Beverly Hills, Calif. (Photo by Chris Pizzello/Invision/AP)

LOS ANGELES — It’s a big week for Ruth E. Carter, who on Sunday could become the first African-American to win an Academy Award for costume design through her Afro-futuristic wardrobes in “Black Panther.” But before that show, Carter will receive a career achievement award Tuesday at the 21st annual Costume Designers Guild Awards.

She talked about her early years with Spike Lee and her favorite “Black Panther” costumes during a recent interview with The Associated Press.

Where it all started

Carter still possesses her sketches from her college days at Hampton University and during an internship with the Santa Fe Opera.

She spent countless hours drawing all sorts of characters, honing her craft in her dorm room and small studio in Los Angeles a few years after college. One sketch she keeps handy is of a unisex dancer sporting red and gray tights.

“I was so excited about the idea of costume design and how it intersects with art. I really wanted to draw the characters out. I spent a lot of time in my dorm room or once I came out to L.A. in my semi-studio at my drafting table,” said Carter, who graduated from Hampton in 1982.

In her early days, Carter delved into a script and drew characters before knowing the person who would play the role. She did that in her first-ever film, Spike Lee’s “School Daze.”

“My process at the beginning was to go head on into the script and draw out the characters and make them funny,” said Carter, speaking with sketches from a cross-section of her lifetime work laid out on a table.

Carter had numerous sketches including Chicken George from “ROOTS,” a zoot suit drawing of Malcolm X and a boxing promoter named Sultan from the “The Great White Hype.”

Carter has created costumes of memorable characters from Denzel Washington’s Malcom X in “Malcolm X,” Spike Lee’s Mookie in “Do the Right Thing” and Forest Whitaker’s Cecil Gaines in “The Butler.”

But she said her favorite costumes came from “Black Panther,” particularly the Dora Milaje, a team of women elite warriors who protected the kingdom of Wakanda. She said the layered wardrobes of the all-female special forces were “impactful” and “powerful.”

“I was very inspired when we did these illustrations,” said Carter, who worked with six illustrators on the superhero Marvel film. She typically works with one.

“You know, it’s quite imaginative. Because we had to work in so many different ways and so fast, I’m really proud of these because we were able to create a look and a world in a short amount of time.”

Even though Carter paved her own way as a costume designer, she never had a problem uplifting others.

That’s the mindset she particularly had while working with Spike Lee. She said the mission at Lee’s production company, 40 Acres and a Mule, was to positively “push the Afro future and African diaspora.”

“We considered ourselves positive role models in the film industry,” she said. “There were always internships at 40 Acres and a Mule where we were teaching younger people who didn’t have an inroad to the film industry, exposing so many people to the industry including myself. Because of that, I give back as much as I can.” MKH

Han Solo’s rare jacket on the show for London auction