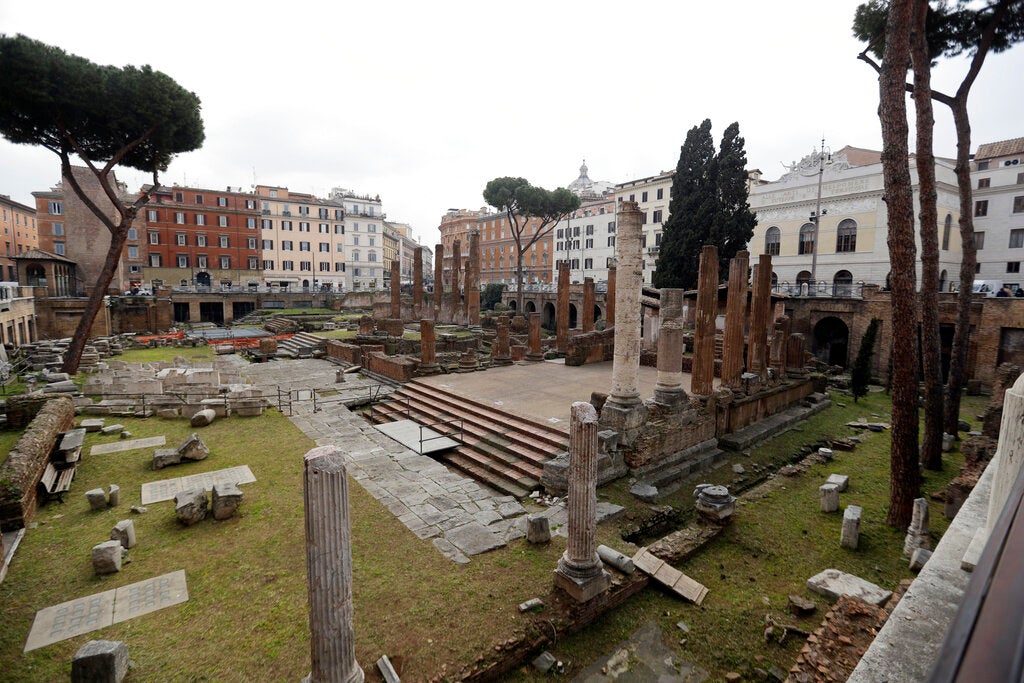 A view of the archeological site of Largo Argentina, in Rome, Monday, Feb. 18, 2019. A complex of ancient temples linked to Julius Caesar’s murder will be opened to the public. The below-street-level temple ruins at Largo Argentina in the heart of downtown Rome is visible to pedestrians. But Rome’s mayor said Monday by late 2021, walkways will be constructed inside the site so that tourists can stroll through the ruins. Bulgari luxury goods maker is sponsoring the work. The area includes a stone podium that was part of the senate-meeting place where Caesar was slain in 44 B.C. (AP Photo/Gregorio Borgia)

Ancient site linked to Caesar’s murder to open to public

ROME — A complex of ancient temples in Rome that are linked to the scene of Julius Caesar’s murder will be opened to the public.

The below-street-level temple ruins at Largo Argentina in downtown Rome is visible to pedestrians peering from above but closed to visitors. For decades, access was enjoyed only by a colony of cats, the cadre of volunteers fed them and, occasionally, archaeologists.

But Rome Mayor Virginia Raggi announced Monday that by late 2021, walkways will be built inside the site so tourists can stroll through the ruins. Luxury Bulgari jewelry-maker, which also funded the restoration of Rome’s Spanish Steps, is sponsoring the work.

The ruins include a stone pedestal from the Curia of Pompey, the meeting place of senators, where Caesar was slain in 44 B.C. MKH

A political quartet and an arresting ‘Julius Caesar’ at the Ateneo