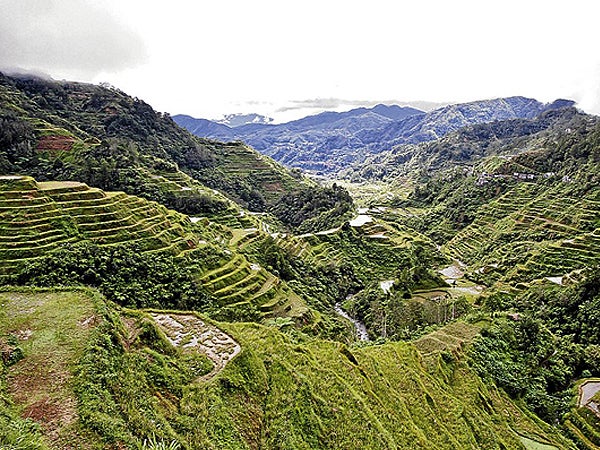 More than 2,000 years ago, ancestors of the Ifugao, using only primitive tools and their ingenuity, carved their mountains into what is now known as the Rice Terraces of the Cordilleras. Located 5,000 m above sea level and some 300 km from Metro Manila, the rice terraces are considered an architectural wonder unmatched anywhere in the world.  Recognized by Unesco World Heritage Center as a World Heritage Site in 1995, they cover over 10,000 sq km of mountainside, and are a testament to the Ifugao spirit and their cultural heritage.

But less than six years later Unesco was forced to inscribe the rice terraces in its list of Endangered World Heritage Sites.  Some blame it on the change in weather patterns brought about by El Niño, which have resulted in droughts and typhoons.  Others say giant earthworms have began moving into the terraces, allowing water to soften the terraces, which lead to more landslides.  For many of the elders, however, the terraces are falling into disrepair and are slowly being abandoned because younger generations of Ifugaos, having gained access to media and education, no longer find interest and purpose to continue what their forefathers have spent centuries building and maintaining. There is also a growing fear that the traditions and rituals, once so deeply entrenched in the community, will soon be forgotten and set aside, along with knowledge of how the terraces were made.

Fortunately, one practice that hasn’t totally disappeared is “Vadchang,” a time-honored tradition among the Ifugao of community bayanihan, and, to many, one of the key reasons why the rice terraces have survived for so long.  At a time when there were no governments to seek help from, the ancestors of the Ifugaos worked hand-in-hand to build and maintain what many of us refer to as the “Eighth Wonder of the World.”  But even that, according to some of the locals who work the terraces, is slowly beginning to disappear. Where once the practice of Vadchang would have resulted in neighbors freely helping each other, money and payment now become a major issue.

The recent landslide in the rice terraces of Batad brought about by typhoon “Pedring” in August 2011 is a testament to that.  Villagers are now less proactive in fixing the damaged areas and are largely relying on the government to fix it for them.

A small group of photographers, led once again by top advertising photographer John Chua, founder of Photography With a Difference (PWD) and a long-time advocate of the restoration of the rice terraces, are taking up the cause to rebuild the destroyed terraces and at the same reawaken the Ifugao spirit.

The concept put forth by the group is to help develop an Ifugao village into an integrated and interactive tourist destination that will not only entertain and educate visitors but will provide ample income and livelihood to the people of Batad so that they find reason once again to preserve the rice terraces and their culture for generations to come.  A showcase of what Ifugao life is all about.

The location chosen for this “showcase” is the village and rice terraces of Batad, a short jeepney and trek from the center of Banaue. The immediate challenge facing them now is initially to:

Repair the damage caused by the landslide and restore the rice terraces to their original state;

Repaint the village of Batad to resemble its original;

Convince the people of Batad to rebuild and maintain the rice terraces;

Teach them to make Batad become a tourist destination as well as reorient their lives, economy and mindset to promote and maintain their cultural heritage.

Building on their success with social media in helping children with disability, the Chua-led group together with Ifugaos on Facebook (mostly working abroad) are now using the same technique to spread the word and help the Ifugao get back what they have lost by bringing “voluntourism” to Batad.

More commonly referred to as “volunteer vacations,” the concept revolves around tourists who provide anything from low-skill work like cleaning or repairing local environment to providing high-skill aid in a foreign country.  While participants vary in profile, they all share a common desire to “do something good” with the offshoot of being able to experience life in places they might not otherwise visit.

Already a group from the Federation of Philippine Photographers Foundations are scheduled to make the first visit to Banaue to immerse themselves into “voluntourism” beginning February, while Canon Philippines will be conducting its first “PhotoSkuela sa Banaue” using its brand ambassadors to teach basic photography to aspiring photographers in the region.

Then in March a French group tied up with the Black Pencil Project, another local advocacy group will be spending a few weeks in Batad to help out in reconstructing the damaged sections of the rice terraces.

The volunteers know that rebuilding the rice terraces is the easy part; the more difficult job, convincing the Ifugaos to embrace their ideas, will be an uphill battle. But with the enthusiasm and conviction of the group and its partners, and a little support from the people of Batad, the first steps of what hopefully will become a model for other municipalities and provinces will be made.