The ‘Coriolano’ challenge: How to tighten it | Inquirer Lifestyle 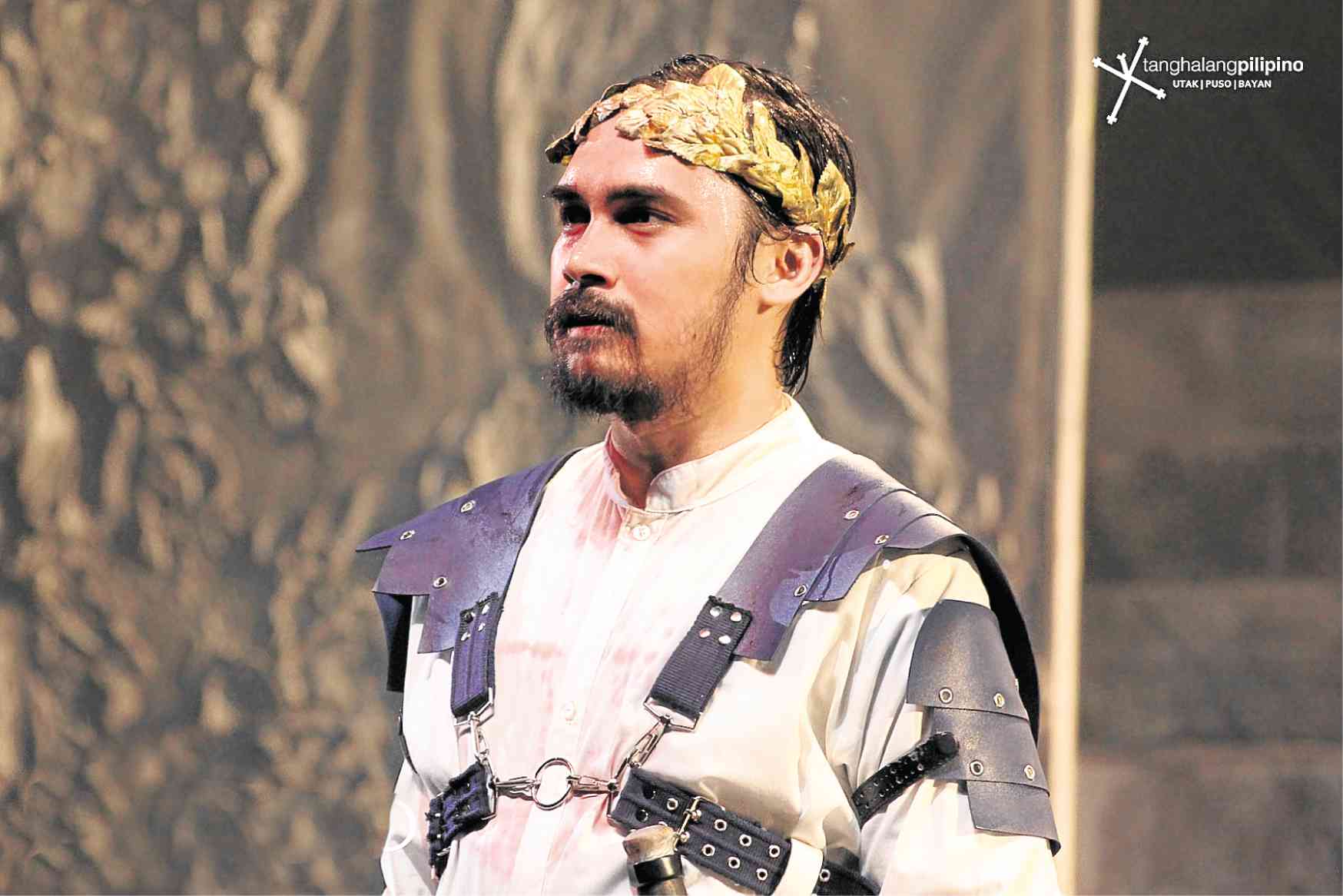 The ‘Coriolano’ challenge: How to tighten it

Tanghalang Pilipino’s (TP) “Coriolano” requires a second viewing, if only because there is a lot to take in in William Shakespeare’s lesser-known play on mob rule, patrician politicking and a domineering authoritarian leader who can swing the course of events in a city state.

While his more famous “Julius Caesar” firmly defines issues on personal ambition and republic governance, “Coriolanus” throws in more stormy elements, such as the lust for revenge, frenemy bromance and maternal manipulation.

Finding focus in this frenzy and making it relevant to a modern audience would probably be the main challenge to a director bringing to life onstage the backstabbing and war-mongering in ancient Rome. As of premiere night last week, TP’s Carlos Siguion-Reyna has yet to tighten his act. His more-than-capable cast, led by Marco Viaña who turned in a stalwart performance, saved the day.

The TP ensemble has become a well-oiled machine, with the members knowing how to play off each other. From fanciful comedies (“Pangarap sa Isang Gabi ng Gitnang Tag-araw”) to provocative dramas (“Ang Pag-uusig”), they seamlessly work as a team, knowing when to bring their audience to the high emotional points and when to transition them during the calmer ones. The leads shine in opportune times, without hogging their scenes or relegating the rest of the cast to obscurity.

In “Coriolano,” that thespic unity is present, but it lacks direction and purpose. The emotional and intellectual interplay splinters off instead of building up into the dramatic climax, with certain moments inexplicably breaking off into uncalled-for humor, frivolity and sentimentality that can confuse the audience who is trying to understand the issues.

The first act meanders along, flitting from one frenetic, uninvolving scene to the next. Heretical as it sounds, sometimes, this proven cast spouts their lines just mechanically, as if not understanding what they are saying.

Bonsai Chelo’s costume design, which is reminiscent of Hollywood’s old sword-and-sandal epics, is also an unhealthy distraction. Likewise are the battle scenes which fail to project the scale of the war being fought, as described in the lines. Too few actors wielding flimsy swords do not a military campaign make.

There are a few supporting actors who consistently breathe authenticity into their roles despite the chaos. Kudos goes to Jonathan Tadioan’s upright Senator Menenio; Sherry Lara’s Volumnia (Frances Makil-Ignacio alternates) who shows us how a mother with a stealthy hand can rock the cradle where lie Coriolano’s mind and heart; and Brian Sy’s charismatic barbarian king who lights up the stage every time he walks in.

The humanity that Sy brings to his part is a stark contrast to his rival, Viaña’s warlike, rigid Coriolano. The production’s lead actor valiantly tries to hold everything together as the central figure. It’s almost a thankless task in the first act, where his stony performance almost bleeds into production designer Ohm David’s gray, listless, boulder-like set designs.

Fortunately, the second act is an improvement, probably because there are less mob scenes, and there are individual moments where the leads and supporting actors are given their time to breathe and just emote. Away from all the distractions, one can finally listen to and appreciate the depth of Guelan Varela Luarca’s translation.

Still, in the end, one finds it difficult to care as the larger-than-life Coriolano meets his fate. None of the lessons learned by the characters—if there are—leave their mark. It’s like watching a historical museum piece that has no bearing on the lives of today’s audiences. Luarca’s translation of this timeless Shakespearean play hints that it should have relevance. This writer sincerely hopes that they surface—clearly and powerfully—as this show continues its weeks-long run. —CONTRIBUTED