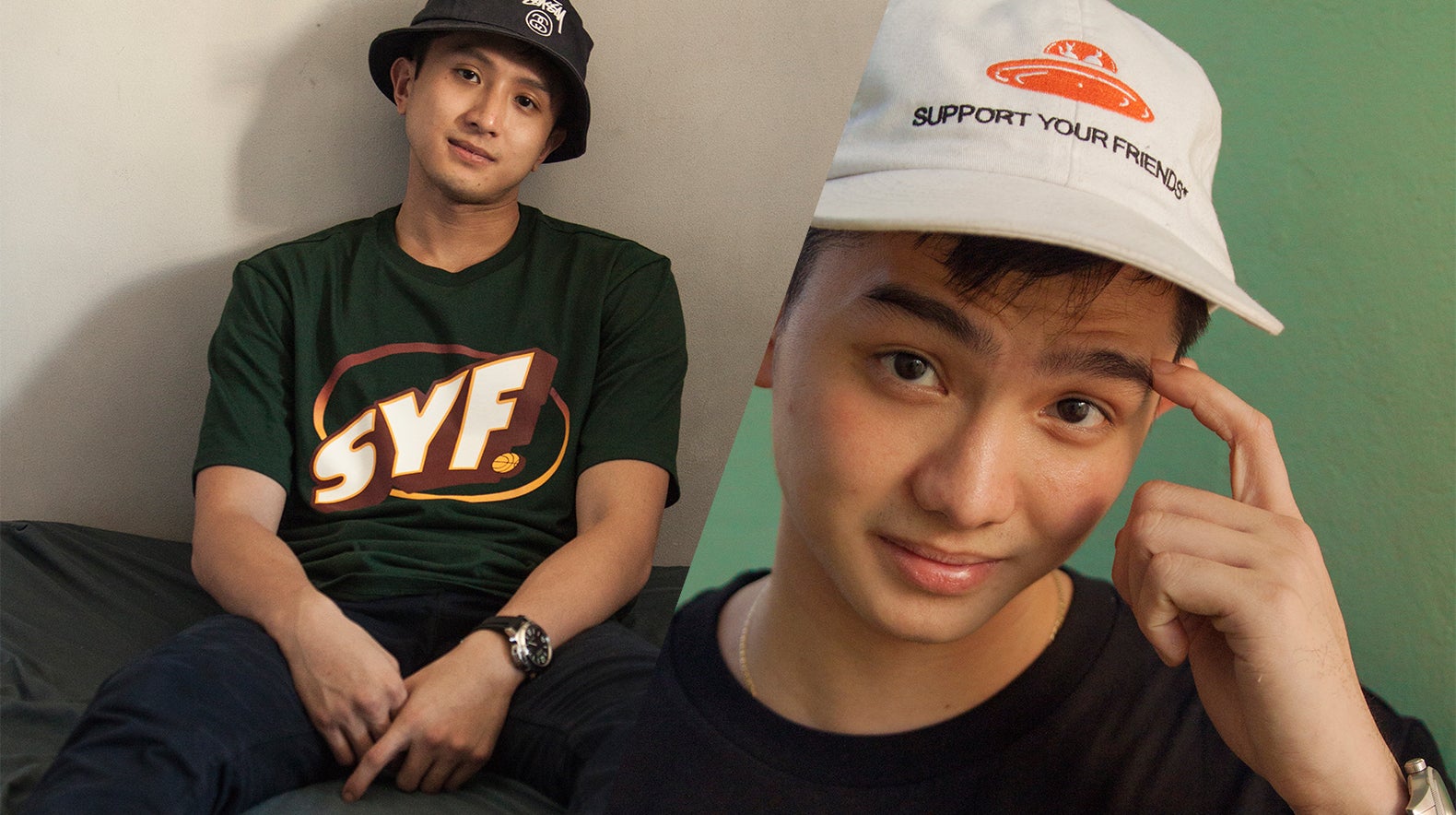 Support Your Friends, aka SYF, is like an oasis in a desert—the desert being the legion of dry caricatures of every ’90s nostalgic moment imaginable in every fast fashion outlet out there. SYF, the three-year-old streetwear brand, serves up swag with heart, figuratively and literally. Their last drop has the SYF logo ensconced in a heart on shirts and hoodies, with the phrase “All this trouble” hovering on it.

The line comes from the 1999 flick 10 Things I Hate About You, where the wise and indefatigable sage Heath Ledger and barely postpubescent Joseph Gordon-Levitt have this exchange:

Cameron (Gordon-Levitt): She never wanted me. She wanted Joey the whole time.

Patrick: Yeah, and is she worth all this trouble?

Cameron: Well, I thought she was, but you know, I…

Patrick: Well, she is or she isn’t. See first of all, Joey is not half the man you are. Secondly, don’t let anyone ever make you feel like you don’t deserve what you want. Go for it.

Right there is the quintessential SYF vibe.

Below, I talk to SYF founders Ralph and Randell Cruz about the brand’s beginnings, the tumultuous name changes before finally something stuck, and how streetwear is a platform for bringing people together. That’s one crucial thing to know about SYF—more than the crisp shirts and the occasional bespoke beer, what the boys do so gracefully and with such infectious joie de vivre is build bridges across universes, from people in art and music, to fashion and food, all the while fostering an expanding network of new friends becoming old friends supporting each other.

As I write, huge collabs are in the works and a new full collection is slated for a June release. So keep your eyes peeled and your Instagram notifications on, because the SYF bros and friends are taking over big time.

Jed: Hi guys! First, let’s talk about how it all began.

Ralph: How it all began—that’s the hardest question!

Randell: The idea, it was planted in 2014. We weren’t sitting down and planning to do a startup brand, we were just talking about it all the time. Then we went to the States in 2014. Maybe it took like a year of conversations. When we went to the States that’s when it got all sealed that, okay, when we get home, we gotta make a clothing brand. Because we were so inspired with people in the States, they’re all so young, working in the skate shops and the clothing stores, people younger than us, working, making money, doing their own thing. You could see their style, the energy, it resonates, you can feel it.

Ralph: When we got back to Manila, we asked ourselves what we could do with what we have right now. And also there was our desire to do something great with our lives, compared to before when everything was super chill.

Ralph: Basically we really wanted change. We’re not just here to start a brand and earn, no, no, that’s the last reason to do it. It’s us doing something that we love. It’s our way of expressing ourselves. You can see it in the brand itself; it’s about the movies that we like, the experiences, the music, the style. It’s our way of showing who we are as people, how we like to see people dress up, how we see it, our own approach, and how to do it. And we all boiled it down into one, which is Support Your Friends.

Randell: It’s like connecting the dots. That’s why we do the movie stuff because we want to know, we want to see who actually likes the movies that we post. It’s like calling out to a friend, yo, you watched the movie too? Okay, nice! You should watch it if you haven’t. And it call connects, from A to B to C, to everyone. Going back to where we started, we started with the name Takeover.

Ralph: You know the typical streetwear approach at first that’s like Supreme, Palace—the name. If you compare SYF to the original Takeover name, it seems far.

Randell: It was a complete turnaround, a 180. “Takeover” because when we got back from the States we had the desire that, we could take over the world! But then we had logos and designs, didn’t feel right, so we went to another name called Pushing Buttons. From doing something to I-don’t-know-what-to-do, Punching Buttons was I’m not sure what I’m trying to do, I’m just trying to punch the right buttons. We did logos, didn’t feel right, so let’s go back to Takeover.

Ralph: Then he made a cap.

Randell: I made a cap, and I put the Takeover logo. It was aliens, a UFO with two people, it was us two, taking over. Then I put “support your friends” on it, because it was our very first venture into something new. We need our friends, we need some support!

SYF is our way of being a channel for those who are aspiring to be somebody, too. Everyone’s a dreamer. —Ralph Cruz

Ralph: We uploaded it on social media, the first prototype, just to see the reactions of people. Just a trial. And out of the blue people were asking, where can I buy that? “Support your friends” is very catchy for the market, people like it, people like what it means, even though it’s such a cliche to say it. So we talked, why don’t we change it to SYF? Support Your Friends—let’s base it on that. It was perfect because it’s our personality as people. We’re the typical, I want to be friends with everyone, I want to connect and connect with people. We’re the PR people, we’re not shy, and we’re open to meeting as many people as we can. So we revolved it around that, and everything connected in a snap.

Randell: The moment we chose Support Your Friends, it was easier compared to Takeover and Punching Buttons combined. It wasn’t smooth-sailing but it was smoother than the path we were taking that time. We put Support Your Friends and positive things happened. From there SYF was born.

Jed: What about streetwear culture resonated with you?

Ralph: The rebellious approach of it at first, how it started that streetwear brands started bootlegging high fashion brands. That’s where their foundations were built. Also a big factor is I’ve been really into shoes ever since, when it started from Nike and everything, it got connected to other things.

Randell: I think every person has a different story of the way a product or streetwear connects to them, ours is the sneaker culture. That is one big factor how we got connected to the streetwear culture. Because I look up to him, so I love the shoes—so Jordans, Jordans I’s—he got really addicted to shoes. You see your big brother rocking that shoe, you’re like, I wanna rock that shoe, too! Also we’re basketball players. Before the game and after the game, you want to look fresh. Yeah I just played basketball so you want to wear that nice shoe, shorts, a big shirt. Every week you have that luxury to change your look. It’s a fashion world in a way.

You seeing another person wearing SYF is like you meeting that person without even getting his name. It speaks a certain language where you don’t even have to say anything. —Randell Cruz

Jed: How do you guys split your roles in running the brand?

Ralph: We split it in a way that we both get approval from each of us. He leads design and I lead operations, but at the end of the day it should be approved by the both of us. It’s better that way for us because you really can’t do it on your own, sometimes you make the wrong decisions, we try to avoid that. The concepts they all come from us. The designs come from my bedroom! A random night we just talk and—oops—design! We could put that on a shirt!

Randell: He’s Head of Operations and I’m Head of Design, but it still intersects. Like for example shipping, he’s the first one to do it but if he can’t, I’ll do it.

Ralph: Don’t put everything in one release!

Randell: That is number one!

Ralph: And curate it, basically. As we told you we didn’t really have much of a background in selling, in this industry. As we moved along and grew, we learned a lot from the people we met. That’s a big help, getting connected to other people.

Randell: That’s what we learned after SS18. We didn’t get critiqued, but people were saying, you have so many releases! We learned from that. Also with the pattern-making. The first release on shirts, the pattern wasn’t that nice. The way we wear shirts, I like mine really big, but him, even if it’s not that big it’s okay. Different fabrics have different fits. If this one’s thick, the fabric wouldn’t drop like that. You have to really learn about it. For the first three years we looked into fabrics, the way it should fall, it should fit. That’s one of the key things in making a good T-shirt, it should fall nice.

Jed: When you do the pop-ups it’s not just merch; it’s art, music, beer! How important is it to you to make it more than just about the merch?

Ralph: That’s the most fun part, doing those pop-ups. Number one reason why we do those pop-ups is not just because of us selling just merchandise. It’s about us making an event combining different walks of life and putting them in one square for a night. And people of different groups and ages all go to support each and everyone of them. That’s the best part of it.

Randell: It’s really just connecting people. Like with an artist, not everyone knows a certain person, but the moment he raps, he sings people just look and listen.

Ralph: It’s our way of being a channel for those who are aspiring to be somebody, too. Everyone’s a dreamer. Since we have this already, maybe we can help others achieve something also. Even the beer, it’s a funny story. A friend invited us to a beer-tasting event, Randell and I went, we tried out different kinds of beer. We randomly decided to talk to the dude who’s the owner. We had this idea that why don’t we make our own beer, and we told him about it. He was so excited and happy that we’re gonna do this! It’s fun to work with other people from different fields and learn from it. And after that, putting them all in one room and celebrating what we did, it’s really fun.

Randell: SYF could be the platform, and the clothes could be the language. You seeing another person wearing SYF is like you meeting that person without even getting his name. It speaks a certain language where you don’t even have to say anything.

For more SYF swing by syf.ph to shop the merch and @supportyourfriendss on Instagram for news and updates. Photos by JED GREGORIO.

The cape, the nerves, and how OJK’s Johan Ong won Best Dressed at prom. By JED GREGORIO

Creative Lives: The photographer is an empath

Photographer Jack Alindahao on essential gear, opening his own studio, and lessons from shooting David Medalla’s portait. By JED GREGORIO