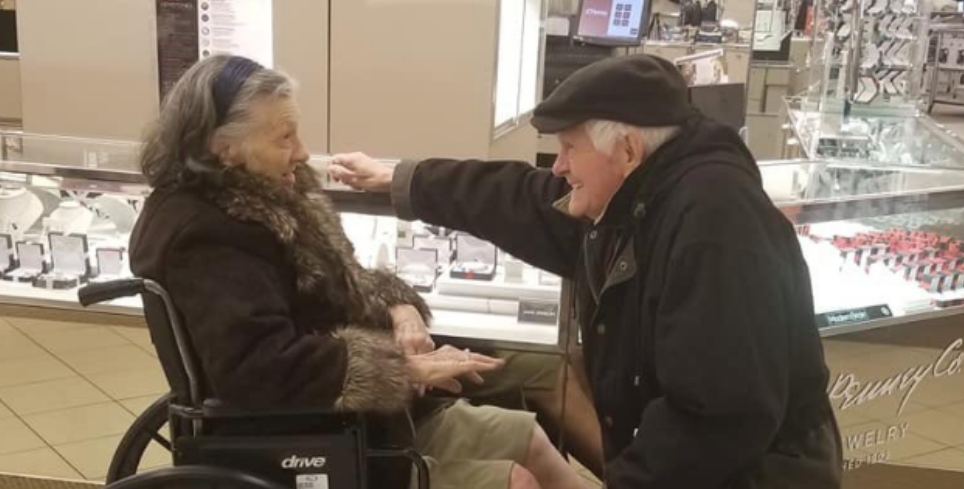 One 85-year-old man from Ohio, USA, proposed to his wife again after 63 years of marriage.

The heartwarming sight was shared on social media by the couple’s granddaughter, a certain Christina, on Twitter last March 2. Her grandparents were identified as Karl and Donna Von Schwarz, as per reports.

In Christina’s post, Karl can be seen dropped down to his knee while his wife Donna sat in her wheelchair wearing the ring on her finger. The moment appears to have been captured at a mall, as the couple were pictured by a J.C. Penney Co. jewelry boutique.

“My grandma has been very sick & we don’t know how much time she has left,” Christina wrote. “After over 65 years of marriage my grandpa got her a new ring and proposed to her again… I don’t know why I’m crying in the club [right now].”

My grandma has been very sick & we don’t know how much time she has left. After over 65 years of marriage my grandpa got her a new ring and proposed to her again…. I don’t know why I’m crying in the club rn pic.twitter.com/PdIiZrLRhs

Christina also shared a video of the proposal after her first post blew up, amassing over 25,000 favorites and around 2,500 retweets since the time of posting.

“Since this blew up I’ll post the video too,” she said. “Look how happy she looks omg.”

Since this blew up I’ll post the video too.. look how happy she looks omg pic.twitter.com/IYTrflvzFw

High school sweethearts Karl and Donna married in 1956 and since then have been inseparable, as per WFAA on March 5. They have faced a lot in their decades of being together, but 2018 seemed to have been the hardest for them because of Donna’s open heart surgery, seizure and stroke.

Karl, then, promised Donna he would buy her a new ring if she made it through surgery. He was true to his word, too, as this is exactly what he did early this March when he took her to the department store to pick out a new ring.

“They’re really just such amazing people, I’ve never met anyone like them,” Christina, who is based in North Texas, was quoted as saying. “They’re definitely something to strive for in a relationship.”

Karl, meanwhile, shared that it was not difficult for him to renew his love for Donna.

“It was great because it’s a gal that I’ve loved all of my life,” he said, according to the report. “It was very easy. You know we’ve been together so long that we can’t stay apart easily.”  Cody Cepeda /ra

WATCH: Bride dances with terminally-ill father on her wedding day