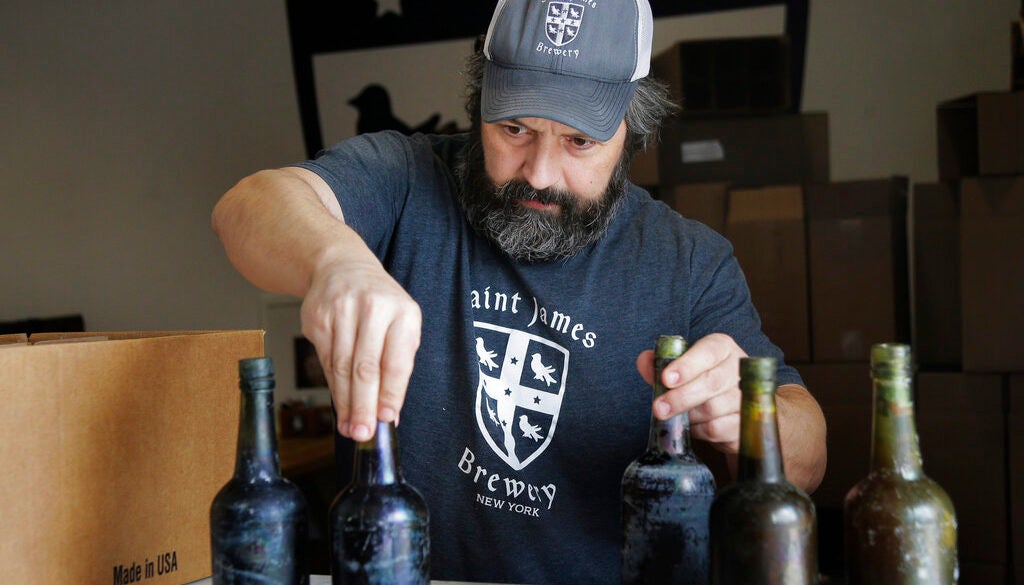 ALBANY, N.Y. — The most distinguishing feature of Jamie Adams’ new ale isn’t its hoppy bite but its compelling backstory — brewed from yeast in bottles of beer that went down on a doomed steamship and languished on the ocean floor for 131 years.

Some who lined up to sample a swig of the new Deep Ascent ale at a craft beer festival last weekend say it provided a refreshing taste of another era.

“Just the concept that they could bring a beer bottle up from the bottom of the ocean … then be able to extract the yeast from it, that kind of chemistry is fascinating,” says beer enthusiast Peter Bowe of Schenectady. “And the beer is absolutely fantastic.”

Adams, a former Wall Street trader who opened Saint James Brewery in Long Island nearly two decades ago, says his beer grew out of his love of scuba diving. It was brewed with yeast extracted from bottles he and fellow divers salvaged from the SS Oregon, a luxury liner from Liverpool to New York that collided with a schooner and sank off Fire Island in 1886.

It lies 135 feet deep in an underwater cemetery known to local divers as Wreck Valley.

“It’s a wonderful, wonderful shipwreck to dive,” says Adams, 44, “I came up with the idea to make some beer if we came up with some intact bottles.”

He enlisted a team of divers in 2015 to search for bottles but didn’t hit pay dirt until 2017, after storms shifted sands and made the first-class dining room accessible. They dug down 15 feet in the sea bed to gain access, and then another six feet inside the ship to find a half-dozen bottles upside-down, corks intact. Later dives found 20 more bottles.

Adams cultured the yeast in test tubes with the help of a microbiologist friend and then spent the next two years brewing test batches to get just the right taste.

Along with hops and malted barley, yeast is a key factor in producing a beer’s flavor and character. During fermentation, the microorganism eats sugar and creates alcohol as well as chemical compounds called esters that impart distinct fruity and floral flavors.

Adams believes the yeast from the SS Oregon is descended from the lineage used by Bass Brewers in England to make a brand called King’s Ale, which is no longer produced.

His said his new beer, which has a slightly fruity taste with a hoppy finish, is a “replication of what would have been served on that ship in 1886. We want people to have a small taste of what life was like as a passenger on this ship.”

It may seem like a lot of effort to come up with a new beer, but shipwrecks have long held a special fascination for craft brewers eager to recreate a taste of history. In 1991, a British brewer used yeast salvaged from a barge that sank in 1825 in the English Channel to create Original Flag Porter. Last summer, Australian craft brewer James Squire released The Wreck-Preservation Ale, crafted using yeast from the merchant ship Sydney Cove, which ran aground in Tasmania in 1797.

For some craft beer enthusiasts, the real appeal of shipwreck ale is the tale more than the taste.

“I spoke to the brewer and he said he was the one who did the dive,” said Calvin MacDowell, sampling Adams’ ale at the New York Craft Brewers Festival in Albany. “Knowing that it’s from such a long time ago and getting a taste of history, it’s exciting.” NVG