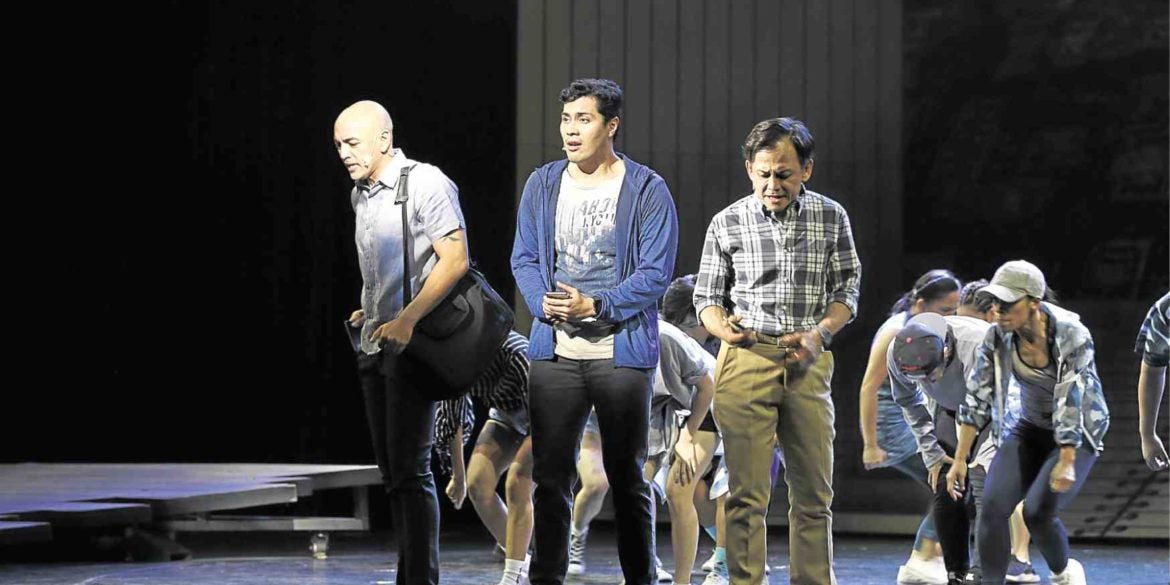 Performances can move an audience, and technical wizardry can dazzle eyes. But in the end, it’s solid storytelling and clear plot development about an issue that touches the heart and mind that make a play.

Floy Quintos’ tightening of the myriad threads that almost dragged down the original production of Full House Production’s “Ang Huling El Bimbo” is a case in point. The current rerun replaces nonessential, if flashy scenes with more relevant ones that add to characterization, clarify relationships, and provide layers of meaning to each scene, building to an unexpected, redemptive climax.

In the end, what emerges is what has rightfully been called by some as a dark musical that touches on loss, disillusionment and regret, but this time offers hope and a possible new beginning.

The rewrite also remedies some of the criticisms that had been leveled at the original production, which was written by Dingdong Novenario and directed by Dexter Santos. Among them is the fond friendship established in college between three guys and a girl that was ripped apart by a crisis smoothly reconciled 20 years later, and again because of another crisis.

That reconciliation was forced, as almost every prior scene showed that the three men, now in their 40s (played by OJ Mariano, Jon Santos and Gian Magdangal), felt nothing but anger and acrimony for each other. Their ties and culpability in the seeming murder of their old friend, Joy (Menchu Lauchengco-Yulo), were never fully explained. So was the role played by their former commandant-turned-local councilor (Jaime Wilson) in the crime.

Amid the time shifts that hurled us from past to present and vice versa, the original run also teased some social issue questions that were never really discussed or resolved.

Quintos does a wonderful job of bringing out all those shadowy issues into the light, and making them part of the characters’ journey, individually and collectively. He is aided tremendously by the addition of Gab Pangilinan who, as the younger Joy, helps us understand what all the ensuing trials and tribulations are about.

As performed by Pangilinan, Joy is the personification of all the innocent dreams that tied the three younger men together: the best friend to the closeted teen (Phi Palmos), a representative of the earnest impoverished to the up-and-coming public servant (Boo Gabunada), and the pure maiden that the filmmaker (Bibo Reyes) wants to love.

As such, their inability to support their friend, at the one time in her life when she needed them most, makes the rupture of that friendship over time credible. So does Joy’s inevitable descent into darkness.

Myke Salomon’s arrangement of the Eraserheads’ music captures the highs and lows of the characters’ journeys. There are no heroes here, just everyday men and women who are left to clean up their own mess.

What lifts them out of the muck and gives them a window of hope is a chance to make it up to Joy’s little girl.

When the girl and her aunt (Sheila Francisco) make their stand against the corrupt councilor, it’s a turning point.

Ligaya’s entry into the lives of her “uncles” is also natural—and the key to make their reconciliation possible.

There are no quick fixes—not personally in all their individual lives, not societally, as symbolized by Wilson’s character still free and moneyed to do what he pleases. Still, slim as it may be, the three men now have something to live for, and a chance to make up for their painful past. It is a very realistic approach that the audience can relate to, and that last scene of a new, more poignant “joy ride” worth following. —CONTRIBUTED