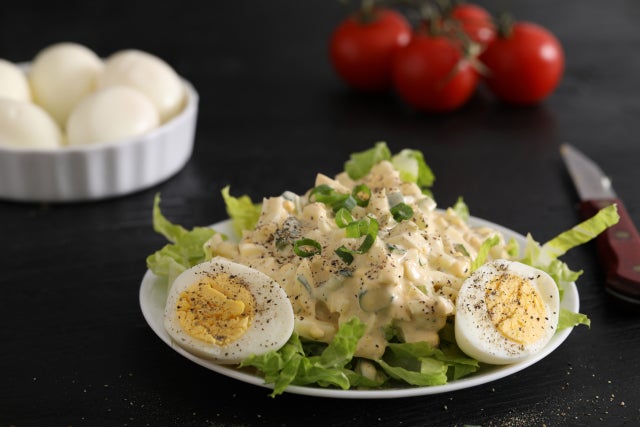 A high angle close up horizontal photograph of a green salad topped with a generous portion of egg salad. A bowl of hard boiled eggs and some ripe red tomatoes can be seen in the background. Isolated on black. Image: IStock/Debbi Smirnoff

The debate over whether eggs are good for you is age-old: while a good source of protein, they also contain potentially harmful cholesterol.

Now, a new study — published Friday by the Journal of the American Medical Association (JAMA) — has weighed in.

After analyzing 30,000 Americans from six separate studies, researchers concluded that eating an extra half-egg a day increased the risk of cardiovascular disease (six percent) and premature death (eight percent) over the study period.

That is relatively little, especially given that a half-egg daily is double what the average American eats.

Separately, the study found an additional 300 milligrams of dietary cholesterol per day increases the risk of heart disease by 17 percent and premature death by 18 percent.

But 300 mg is twice the average daily amount eaten by Americans. A large egg contains about 186 mg of cholesterol.

The new data suggest that eating eggs increases the risk of heart attack or stroke, although the study does not establish a causal link.

Still, it offers enough data to “make a strong statement that eggs and overall dietary cholesterol intake remain important in affecting the risk of (cardiovascular disease) and more so the risk of all-cause mortality,” physician Robert Eckel, of the University of Colorado, wrote in an editorial in JAMA.

But as Tom Sanders, a professor of dietetics at King’s College London, points out, these results differ from a large US study published in 1999 that found no effect — like a 2013 analysis of three million adults published in the British medical journal BMJ.

A recent Chinese study even concluded cholesterol decreased the risk of cardiovascular disease.

Sanders thinks the new results are only relevant for the United States, where the average person eats more eggs and meat than in Europe.

“Eggs in moderation — around 3 to 4 per week — is fine, and that is what current UK dietary guidelines say,” Sanders said.

In France, national nutrition guidelines refute the idea that you should not eat more than two eggs a week: “You can eat them regularly.”

And dietitian Victoria Taylor, of the British Heart Foundation, insists that the way you eat the egg and with what is so important.

“Eating healthily is all about balance. If you’re eating too much of one thing it leaves less room in the diet for other foods that may have more health benefit,” she said.

“Eggs are a nutritious food and, while this study focuses on the amount we’re eating, it’s just as important to pay attention to how the eggs are cooked and to the trimmings that come with them. For example, poached eggs on whole-grain toast is a much healthier meal than a traditional fry up.” CC