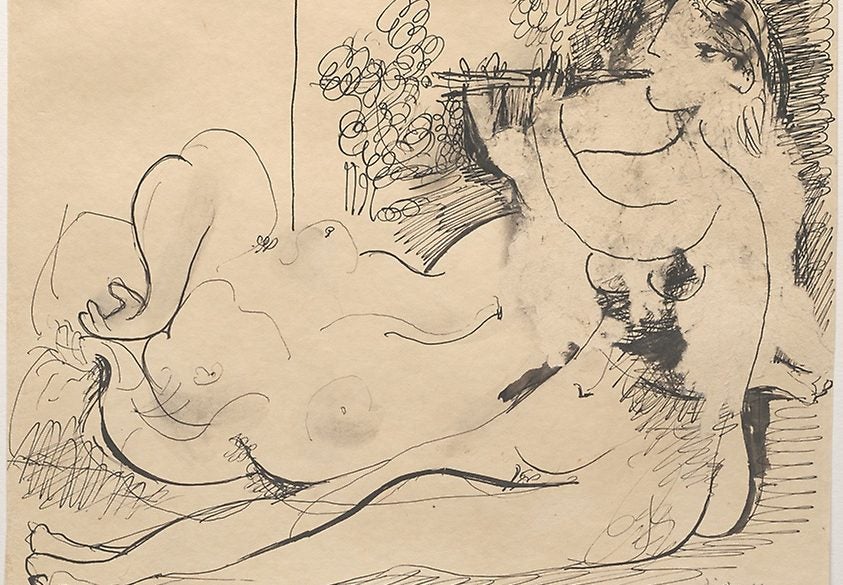 A rare nude drawing by Picasso of his lover Marie-Therese Walter is to be sold by New York’s Museum of Modern Art in Paris later this month, Christie’s said Wednesday.

MoMA is putting the ink drawing “Flute Player and Reclining Nude” under the hammer to raise money for its acquisitions fund.

The auction house said the work from 1932 — which has never before been sold — is one of a series of drawings in which the artist revealed his passion for the French teenager he met in the street in 1927 when she was 17 and he 46.

Years later, she told how Picasso walked up to her while she was out shopping in Paris and declared, “I am Picasso! You and me are going to do big things together.”

“He saw me coming out of the metro and took me by the arm,” Walter recalled.

“I was a young innocent girl. I knew nothing — nothing of life nor of Picasso.”

“The day that I met Marie-Therese I realised that I had before me what I always dreamed of,” Picasso later confessed.

She quickly became his model and lover and in 1935 gave birth to their daughter Maya.

The drawing shows Walter lying on a couch naked next to a flute-playing sprite, a recurring motif in the Spanish artist’s work.

Antoine Lebouteiller of Christie’s said they were expecting huge interest from art collectors.

“It’s great quality and prestigious provenance with definitely draw a lot of major international buyers to Paris for the sale,” he said.

Picasso gave the drawing as a present to his dealer Daniel-Henri Kahnweiler, and it was donated to MoMA by the American artist Eve Clendenin in 1961.

Museums often sell or exchange works to help them complete or balance their collections of certain artists.