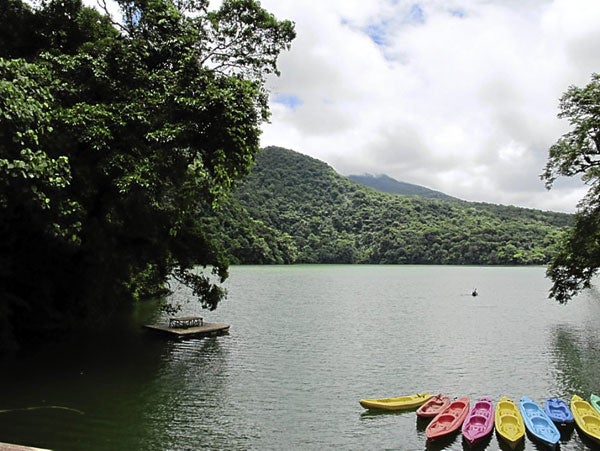 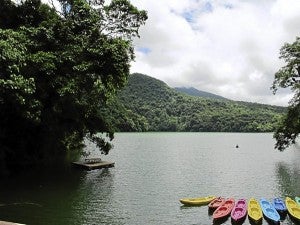 There are many conservation success stories in the Philippines. Most of them are unknown. Bulusan Volcano Natural Park in Sorsogon is one of those unknowns.

Designated a National Park in 1935 and now under the protection of the DENR Protected Areas and Wildlife Bureau, it is a lush forest and wildlife sanctuary reserve that features, aside from the volcano itself, Bulusan Lake, two other mountain formations known as Sharp Peak and Hormahan, and Lake Aguingay.

Bulusan Volcano, formed about 40,000 years before the present era, soars 1,565 meters high over a base diameter of 15 km. Its cracked profile, deep ravines and caves are the result of gradual buildup of outpourings from eruptions over the ages.

A substantial area of protected forest remains around the peak and slopes, including secondary grassland, freshwater lakes and pools which are is the water source for several communities and provide irrigation for surrounding agricultural land.

The forest provides natural protection from calamities such as typhoons and flash floods. It is home to fauna like the Philippine baboon, hawks, monitor lizards, various endemic frogs, snakes and other reptiles. Some say that once there were deer but none has been sighted since the 1980s. 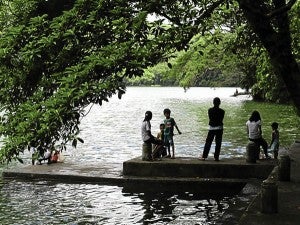 Within the protected area are small settlements, rural gardens, abandoned farmland and ground disturbed by illegal farming which is banned within the declared boundaries of a National Park.

The park supports the needs of its communities through its forest products, watershed and recreational values. Residents the lower slopes as agricultural land.

Outstanding at Bulusan is the change in attitude by the local community, which now looks at its natural heritage as its source of livelihood instead of ravaging it for short-term gains as they did in the past.

A change in attitude like that certainly could not have happened overnight. The Aggrupation of Advocates for Environmental Protection Bulusan (Agap) is the determined NGO composed of local nature advocates committed to effect change through involving the resident community in conserving rather than ravaging their natural heritage.

To stop forest devastation from illegal farming, employment was generated for local residents, partly through an internationally funded forest-preservation program which hired locals for forest documentation, maintenance, and replanting of trees in degraded areas.

The simple strategy of Agap was to involve the resident community in nature-based activities that generated income which in turn led to the community’s renewed respect for the environment since it provided human sustenance. It is one of the success stories of how heritage, whether natural or cultural, is protected by locals because it is a nonrenewable source of their income.

Tourism is a major source of income for Bulusan. Agap offers mountain treks of varying lengths and difficulty; manages fishing and nonpolluting kayak activities on the mountain lakes; and operates a visitor center with canteen and massage facilities.

Bulusan Volcano is now on alert, causing a drastic drop in tourism arrivals. However, what is not reported in the media is that the tourist activity area within the park is well outside the 4-km danger radius, still perfectly safe for tourists. 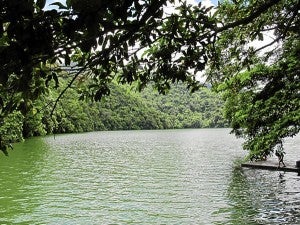 We went to Bulusan early on a crisp morning, barely a week after the fall of the first June rains. We drove from Legazpi toward the Sorsogon border with Mount Mayon in full view, a vista of volcanoes appearing one after another, a memorable sight.

As the landscape changed from urban to rural, summer-parched earth gave way to the intense green of the fields. Water-filled rice paddies ready for planting reflected the early morning sunlight, a mosaic extending all the way to the distant shoreline in geometric precision, exactly the kind of tropical landscape expected of the Philippines.

Practically all highways in the region skirt the grand chain of volcanoes that stretches southward from Camarines Norte to Sorsogon. They are majestic natural landmarks that dominate and give unmistakable character to the remarkable Bicol landscape.

To get to Bulusan Volcano Natural Park from Sorsogon City, one option is to take the Maharlika Highway to the town of Irosin, passing through the towns of Casiguran and Juban. Another option is the scenic route overlooking San Bernardino Strait with the Pacific Ocean beyond, passing the towns of Gubat, Barcelona and the centro of Bulusan town, which still have a handful of surviving but decaying heritage structures.

The Visitor Center at the park is everything an environmentally sensitive structure should not have. It is a concrete structure whose posts are painted to simulate logs. Solid concrete paves the parking lot.
A bigger-than-life-size statue of the Blessed Virgin, out of place in the pristine natural setting of Bulusan Lake from whose shores the green forests reach upward to the majestic volcano slopes. That, together with the stillness and one’s intimate union with nature at Bulusan, is testimony enough to the greatness of the Divine.