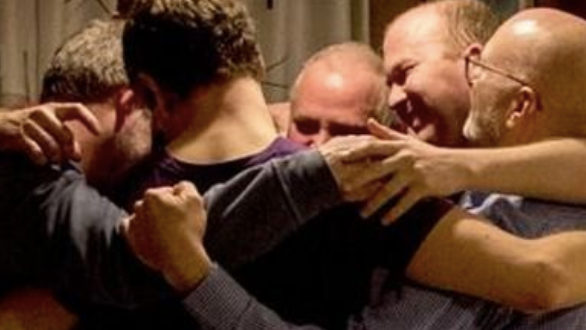 A therapeutic cuddle group made up of men is redefining what it means to be a man through three things: acceptance, affirmation and affection.

The group, aptly called “Men’s Therapeutic Cuddle Group,” hails from Plymouth, Pennsylvania and is showing men the importance of vulnerability. As per the group’s Meetup page, the intention of the cuddle group is to “provide a safe, structured and platonic environment for men” through non-sexual cuddling.

“Men may want to cuddle or be held for many reasons, including to help heal past sexual abuse,” the group wrote. “If touch boundaries are not honored by all men, it can be damaging to the emotional or psychological health of other men.”

The group was established two years ago, as per Philly.com on March 25. Its members come from all walks of life and sexual orientations, including a 37-year-old Mormon, a 57-year-old married father of three, and a 62-year-old retiree, among others.

“So often, we’re taught that to be an emotional stoic is the mark of manhood,” 46-year-old Scott Turner, an interior designer and co-founder of the group, was quoted as saying. “If you show any emotional weakness or vulnerability, that’s a failure to your title of a man.”

A normal session starts off with mindful breathing before the men break up in pairs to do the “motorcycle hold,” as per the report. One man sits with his back against another, akin to riding a motorcycle. They also show affection through hand holding, beard stroking and hand massages, to name a few. After fifteen minutes, they then switch partners. For the second half of the session, the men gather in a “puppy pile” where they lay on each other’s laps and just chat and joke.

Kevin Eitzenberger, who founded the group with Turner, shared the initiative is supposed to make men feel safe in sharing their innermost thoughts. The men talk about their personal lives, such as losing a loved one in childhood, past sexual abuse, and their own regrets as fathers, among others.

So far, the cuddle group is not open to the public and their Meetup page, which has around 53 members, is marked private. Their aim to establish a safe and platonic space for men seems to be working, though, as Eitzenberger shared he receives about two requests a week from other men who want to join the meet-up.

He added, “They learn it’s OK to be a little fractured.” Cody Cepeda/JB