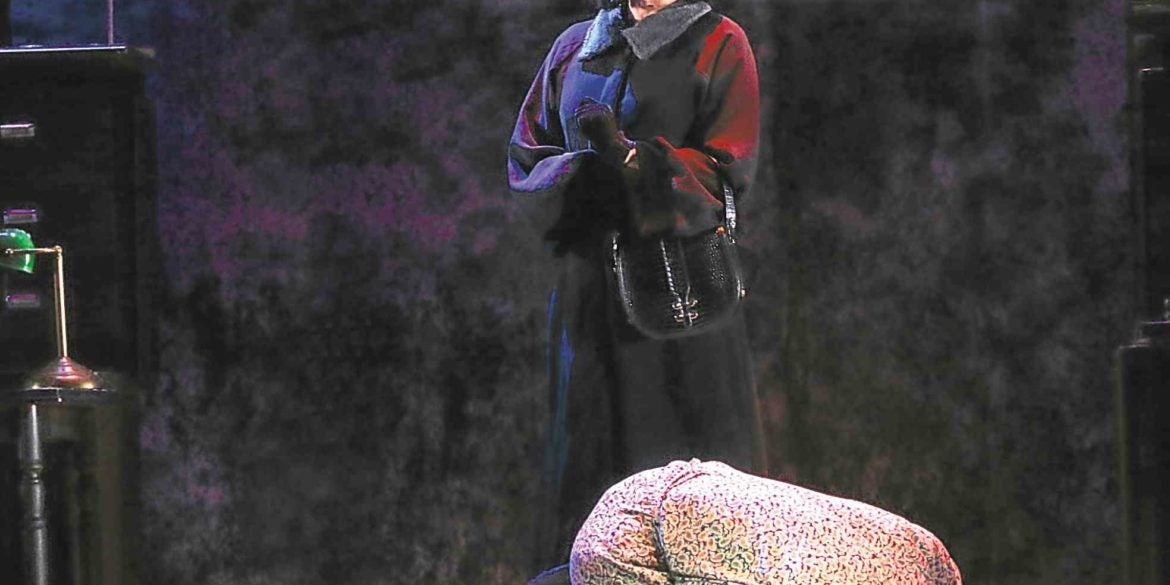 How director Bobby Garcia ends his staging of Tony Kushner’s “Angels in America: Millennium Approaches” is the very definition of big dick energy—not with a deafening bang, but with drawn curtains that leave the viewer starving for more (a.k.a. “Perestroika,” or part two of this two-part “Gay Fantasia on National Themes,” as the subtitle goes).

You can say the same thing about the whole production. This “Angels”—Garcia’s second stab at the play after premiering it in Manila in 1995—does not go for grand gestures, boom and spectacle. Instead, it pulses, its movements consisting not of breathless beats, but sharp, deliberate strokes intent on dissecting the play’s raw, primal core.

It’s the kind of dissection that has become Garcia’s trump card of late. Across the board, from “The Bridges of Madison County” to “Fun Home” to “Waitress,” his productions have been united by an emphatic focus on the text—an honest-to-goodness “tell the story” sensibility that enables his productions to transcend cultural barriers easily.

And so this “Millennium Approaches,” where one emerges—three acts, two intermissions and three and a half hours later—strangely invigorated, despite Kushner’s cautioning in the script that “an epic play” such as “Angels” “should be a little fatiguing.”

You have to admire, for instance, the way this production skims through jokes and lines that predictably go over the Filipino audience’s heads—digs on Jews and Republicans that are otherwise surefire hits on the other side of the globe (check out the filmed version of the marvelous 2017 London National Theatre production, for starters).

Garcia zeroes in on the unfiltered emotions that are the backbone of this play. This is, after all, the interconnected story of two couples at the height of the 1980s AIDS crisis in New York: life and death, sickness and betrayal, history and heaven unraveling.

And if Kushner intends for “Angels” to be “an actor-driven event,” Garcia’s “Millennium Approaches” is an unqualified success—well, almost.

The sore thumb in this eight-person play is Andoy Ranay, in the role of the Black drag queen Belize. It is unquestionably a tough role to cast hereabouts, yet, without even invoking the part’s physical requirements, Ranay is evidently out of his league here—so out of sync with the play’s chop-chop rhythm, to say nothing of his rather wan characterization.

That only means the rest of the cast assembled by Garcia are in top form. The four other men in the play deliver superlative, career-defining performances—Topper Fabregas, alternately fierce and fabulous as Prior Walter, the show’s narrative pivot; Nelsito Gomez, a pathetic yet transfixing presence as Prior’s lover, Louis; Art Acuña as the diabolical Roy Cohn; and Markki Stroem as the closeted lawyer Joe. (In Stroem’s case, it’s even more impressive when you consider how persuasively he transports you on his character’s entire arc, and realize this is only his first nonmusical stint.)

The three women, juggling nine roles among them, are knockouts in their crucial parts: Cherie Gil as Joe’s Mormon mother; Pinky Amador as multiple characters, but especially her near-wordless turn as a hobo; and Angeli Bayani, summoning to astounding, sometimes frightening life Joe’s Valium-addicted wife, Harper.

Further stressing Harper’s volatility, Garcia even introduces Bayani as a scuttling figure on Faust Peneyra’s set—an unobtrusive clutter of desks and lamps seemingly piled atop each other, corralled by imposing gray walls that, as lit by the ever-reliable Jonjon Villareal, cast an old-world, claustrophobic feel.

It’s but one of the ingenious bits of stagecraft enlivening this production. (GA Fallarme’s projections are another, his evocative visuals crafting settings in seconds.) The other bits, one may understandably harp on—how, for example, the reveal of the titular angel at the end comes off more as underwhelming apparition than earth-crashing revelation.

Such faults are ultimately rendered microscopic by the impeccable whole. Where they matter most, “Millennium Approaches” lands its punches—and my, how it soars. —CONTRIBUTED

“Angels in America: Millennium Approaches” runs until April 7 at Carlos P. Romulo Auditorium, RCBC Plaza, Makati City, with performances on Friday-Sunday at 8 p.m. and Saturday-Sunday at 2 p.m. For tickets, call Ticketworld at 8919999 or log on to ticketworld.com.ph.