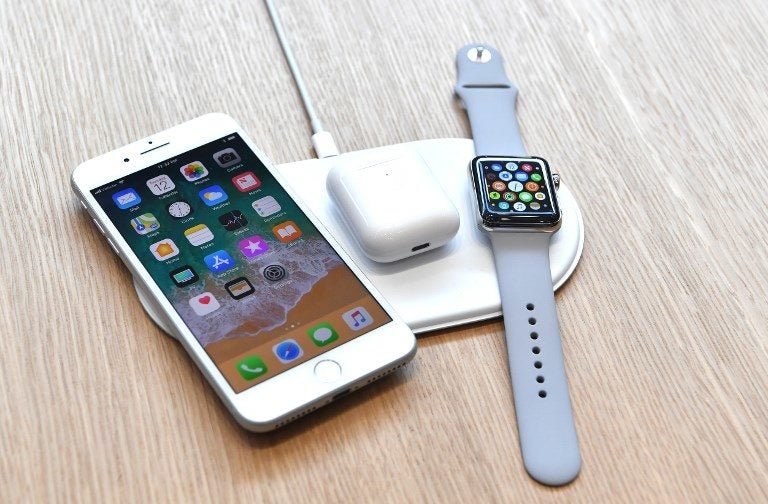 An AirPower mat is seen charging multiple devices during a media event at Apple's new headquarters in Cupertino, California on September 12, 2017. (Photo by Josh Edelson / AFP)

Apple confirmed on Friday that it will not deliver on its promise of helping usher in a wireless future with an AirPower mat for charging its devices.

“After much effort, we’ve concluded AirPower will not achieve our high standards and we have canceled the project,” Riccio said.

“We continue to believe that the future is wireless and are committed to push the wireless experience forward.”

He apologized to Apple fans who were looking forward to the AirPower.

AirPower was announced at the same time as the iPhone X, a premium model that marked the tenth anniversary of the company’s flagship smartphone.

It was heralded as part of a shift to mobile lifestyles less entangled by wires, and images at the project’s unveiling showed AirPower as a mat where Apple’s phone, smart watch, and AirPod ear-bud case could be placed together to charge without being plugged in.

While Apple has delayed release of products in the past such as its AirPod ear buds and a HomePod smart speaker, it is not known to fail to deliver on innovations touted at events.

Other companies sell charging stands or pads that can be used to wirelessly power up iPhones or other devices compatible with the technology, which is based on an industry standard.

The broken hardware promise comes as Apple shifts its focus to digital content and services to break free of its reliance on iPhone sales.

With Hollywood stars galore, Apple this week unveiled its streaming video plans along with news and game subscription offerings.