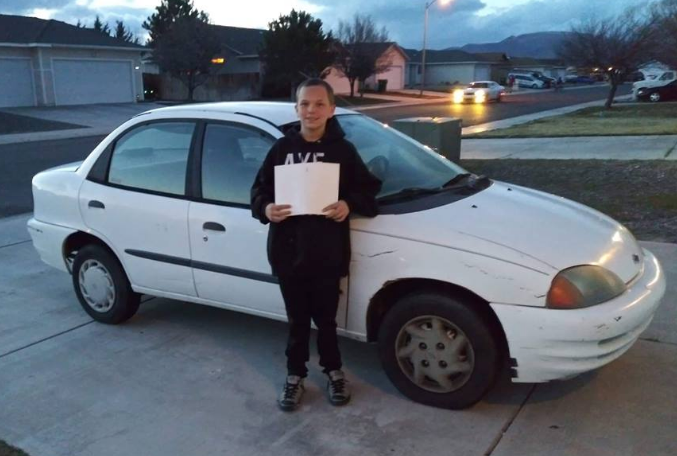 Not many 13-year-olds can say they bought a car for their mom, but one boy from Nevada, United States did just the thing.

Krystal Preston, a single mom, had been trying to make ends meet for her three kids, as per KOLO-TV via KFVS 12 on March 30. Her eldest son, 13-year-old William, helps around and does yard and house work around the community to make extra money.

William, born with a severe case of bilateral clubfoot and diagnosed with attention-deficit/hyperactivity disorder (ADHD), was inspired to surprise his mom after seeing videos on YouTube of kids buying their mothers a car. One day, while scrolling on Facebook, he saw a woman who was selling her 1999 white Chevrolet Metro. William thought it was the perfect opportunity to fulfill his quest.

“It was really cheap so I asked her if I could trade it or earn it,” he said in the report. “At first she said no, and after she thought about it, then she said yes.”

William apparently also traded in his Xbox video game console to help pay for the car, as per various reports. After negotiating with the woman, he went home to tell his mom the news — but she was skeptical at first.

“I lost it, I bawled,” Krystal was quoted as saying. “I was just like, there’s no way. And then she gave me the keys and the paperwork.”

Krystal is nothing short of proud of William and took to her own Facebook last March 24 where she shared pictures of him with the car.

“I am so proud of my son. He is such a good kid. What 13-year-old kid do you know that buys his mom a car?” she said. “William, I love you son and thank you. You have such a big heart…”

I have no words right now that can express how I am feeling at this moment. I'm in complete shock … The last couple…

Krystal’s post, as of this writing, has since garnered over 4,000 reactions on the social networking site. William, however, made it clear that it was not the publicity he was after.

“I didn’t really want that to happen,” he simply said. “I just wanted to do it, that’s all.”

The family has since put up a GoFundMe page in honor of William’s inspiring story. Apart from yard work and mowing lawns, William also helps the construction workers in his community and finds joy in the work. Cody Cepeda/JB