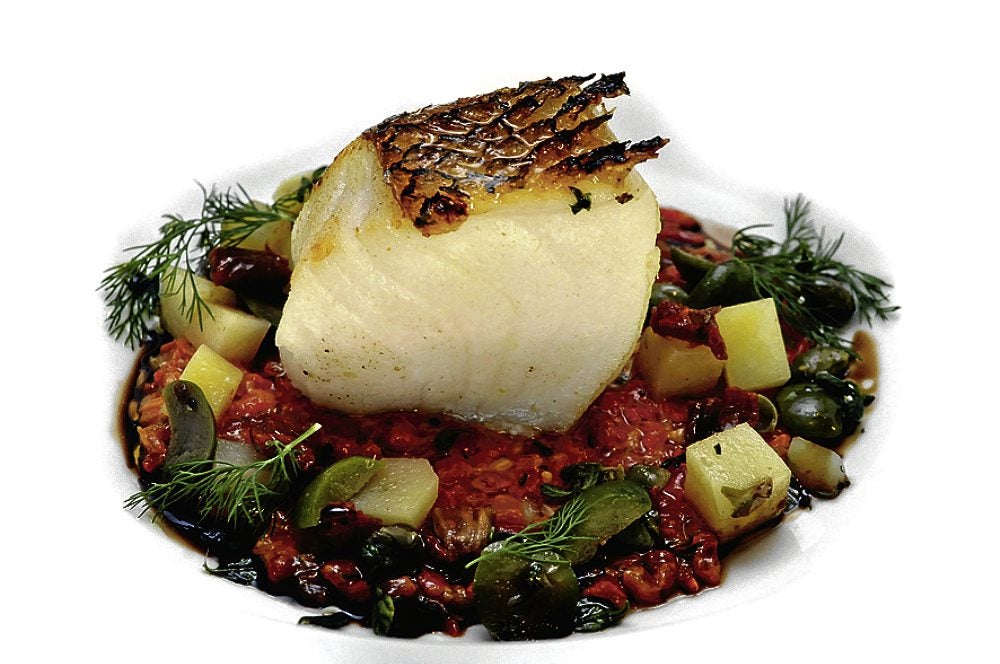 Back in the Philippines doing what he loves best–cooking

“I love the Philippines, that’s why I came back,” says Christian Werdenberg, the newest executive chef of Dusit Thani Manila.

Werdenberg used to work in another hotel in Manila, also as an executive chef, for two years before flying to Beijing to continue his culinary calling.

Yet, according to the 45-year-old Swiss, he so missed the Philippines that he wanted to return.

Given that he likes the people, the food and the beach, Werdenberg has always been thrilled working in big hotels in Manila and their varied clientele.

He officially joined Dusit eight months ago and, so far, he’s enjoying the company of his newfound family.

“I can’t compare the two hotels because both have diverse clients, and the location, concept and food outlets are far different from each other,” says Werdenberg. “Dusit is really special, unique and exciting for me.”

As a passionate culinary artist, he admits there’s nothing much to work on Dusit in terms of its existing dining outlets. No need to redo or revamp because each of its classy restaurants is already doing quite well, especially Umu, Benjarong, Tosca and Basix.

“I just did a little enhancement on Basix,” says Werdenberg, explaining that the all-day dining buffet outlet needed a more modern and sophisticated look, as well as quality food.

“I don’t like on the buffet very filling items that make you feel full right away,” he says. “I always see a lot of rice salad and pasta salad, all those heavy stuff. I like less but more quality food. I added fresh food items.”

For Tosca, Werdenberg is working on a new menu concept. When he joined Dusit, Tosca was known for its Euro-Italian cuisine which, for Werdenberg, was quite confusing. It needs real identity.

Asking regular diners what they really want to eat, the hotel staff found out that apart from Tosca’s pizza and pasta, people also crave for more premium steaks. Steaks are among Tosca’s best-selling items.

“So I came up with an Italian grill kind of concept,” says Werdenberg. “Still keeping the Italian authenticity, we are more focused on nice grill items, either fish or red meat, accompanied with delicious pasta and pizza.”

For Umu, Werdenberg leaves everything to the Japanese chef. With Benjarong, he leaves it to the Thai chef.

“Food-wise and cooking-wise, they’re already perfect,” he says. “No need to touch it. In fact, I am not in a position to tell them how to cook their own national food.”

Training of kitchen people is going on. For Werdenberg, it’s important to give them clear directions and recipes of new dishes.

“If it’s a new dish, we all cook it and taste it together,” he says. “In this way, they easily get to understand how things are done and how to do them properly.”

Werdenberg likes big banquets. He enjoys preparing custom-made menus for Dusit clients. For him, the bigger, the better; the more, the merrier. He thrives in big functions, like corporate events and huge weddings, and gets excited planning and preparing the food.

“I’m drawn to that,” he says. “I like the hectic atmosphere in the kitchen. Of course, you have your temper if things don’t work your way. But it’s very temporary. Afterwards, we all go home and forget about it.”

Through the years, Dusit has maintained its strength as one of the five-star hotels that offer authentic dining experience.

“Regardless of nationalities, people are really looking for authentic food,” says Werdenberg. “I think that’s our strong point because we have fantastic Japanese and Thai restaurants.”

But, with all the competition around, them he knows he has to be on his toes all the time.

“We have to keep on changing and improving the quality step by step,” he says. “Our edge is consistency and quality. That’s the only strategy that will sustain and guarantee success.”

As far as he remembers, Werdenberg has been tinkering in the kitchen since he was 10 years old back in Switzerland. He would help his mom prepare and cook the family food.

Culinary blood runs in the family. His brother, cousins and other relatives are mostly chefs in his hometown. His elder brother, Hansjoerg, has been the most influential in his career.

“At first, I was not decided whether I would be a butcher, a baker or a cook,” recalls Werdenberg. “After my practicum, I saw how cooking could combine everything into one. My brother really pushed me hard to be good in my field. He trained me in the kitchen.”

“After I graduated, he helped me find my first job. But, after my first work, I promised to myself that I would never work in a place where my brother used to work. We were always compared. They would say my brother is better than me.”

On his free time, he loves to go on a road trip, either going up north or down south. He drives with his Filipino girlfriend.

He also likes to try and eat assorted food along the way. He likes kilawin, crispy liempo and sinigang na baka. He’s been to Boracay, Cebu, Baguio, Tagaytay, etc.

He relaxes by cooking.

“I enjoy cooking on my day off or even in the evening after work,” says Werdenberg. “I’d go home and cook pasta or grill meat. I’d have my Pale Pilsen beer, my music and CNN. I’m good. That’s de-stressing for me.”

Here’s a recipe from Werdenberg which he says he would typically prepare on his free time.

For mussel stock: Heat olive oil in a sauce pan, add chopped garlic and shallots and let it sweat until infused and fragrant. Add the mussels, toss well and then add the white wine. Cover with a lid and let simmer until mussels open up. Remove mussels from the shell and set aside. Reserve the mussel stock.

For the sauce: Heat olive oil in a saucepan, add chopped garlic, shallots and chorizo. Let it sweat until infused and fragrant. Add the soaked lentil and toss well. Add chicken stock and the mussel stock and simmer until the lentils are soft. Add fresh cream and blend well using a blender until smooth and frothy.

For scallops: Season the scallops with salt and pepper and dust very lightly with flour. Sear in a very hot pan and cook quickly on both side. Place scallops and the reserved mussels in a serving dish and pour on the lentil chorizo sauce.