Lessons from Seph Ubalde: How you can help a depressed person | Inquirer Lifestyle ❮ ❯ 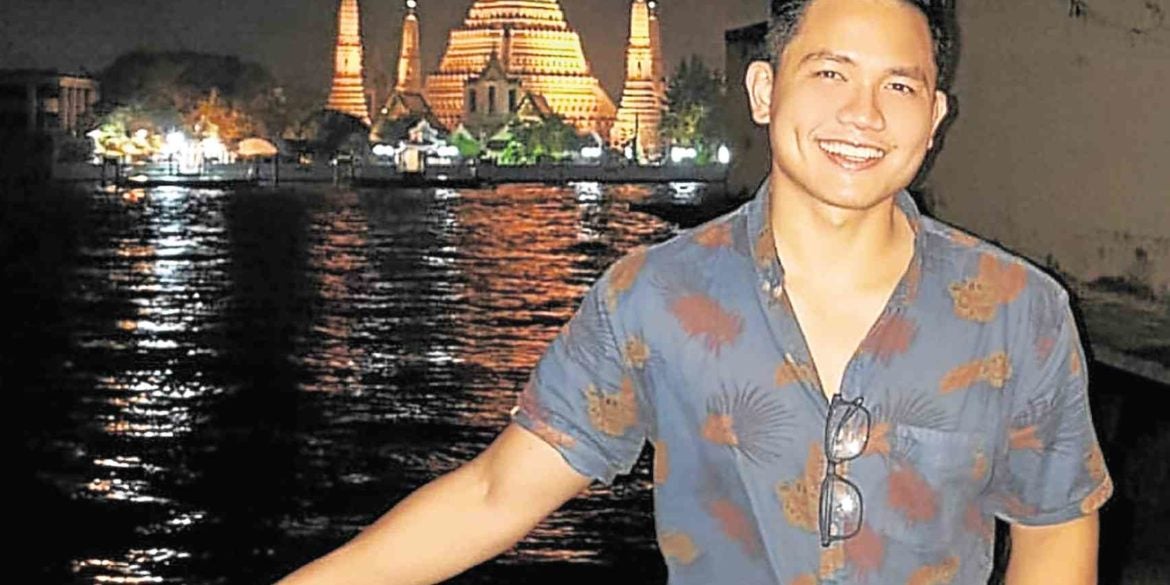 Seph Ubalde (shown in Thailand, in a photograph from his Instagram) emphasized the need to have someone to talk to.

Lessons from Seph Ubalde: How you can help a depressed person

Depression wears many faces. It isn’t always the stereotype of gloom and doom.

Joseph “Seph” Ubalde was the last person you would think was depressed. He was 33 and in the prime of his life, a good-looking man who seemingly had it all, but who would grapple with his demons late at night.

Tired of the emotional pain, he chose to record a video one evening in late March, before he was found dead.

In the video, he talked about the possible causes of his depression, and more importantly, what a depressed person needed to make it through the dark times.

In the beginning, he speculated that perhaps the emotional and physical abuse he suffered as a child at the hands of his father, the bullying, and his uncertainty about gender and identity were all contributing factors to his depression.

Studies show that adverse childhood experiences (ACE), such as being abused by a parent or being bullied, contribute to one’s depression later in life. Issues of gender and identity are other possible variables in contributing to a young person’s depression, especially if he or she is unable to unburden for fear that no one will understand or listen.

The fear of being judged adds to the anxiety.

I spoke to Dr. Edwin de Leon, a child, adolescent and adult psychiatrist on the Behavioral Health Team of Riverside County in California, about Seph’s video.

“Bullying can be the most invalidating and humiliating moment in a young boy’s life,” said De Leon.

He recalled how, during a senior high school retreat at the Ateneo, he and his classmates opened up about their experiences of bullying. “It’s a memory that stays with you, so it’s very important to address it and get validation from either a parent or a teacher. When parents provide support, the child no longer feels that he or she is alone.”

I asked about the importance of being able to talk about these issues within the family, and how, because of cultural biases, we refuse to address the problem until the young person has already developed suicidal thoughts.

I told him how, in two forums on mental health for the youth that I attended last year, the number one concern that many teenagers raised was how their own families did not take their depression seriously.

“Some families refuse to talk about mental health, and at times ridicule or minimize symptoms as nothing more than acting out. It belies a lack of understanding or an underlying fear that it reflects negatively on all family members,” he explained.

“In my practice, I try to identify a family member who is open to discussion and has the capacity to disseminate information,” he added. “If I am unable to do so, I try to reach out to the affected person, providing resources such as suicide hotlines, safety protocols like going to the ER, especially when experiencing severe negative thoughts with high risk of self-harm.”

In the video, Seph also emphasized the importance of having someone to talk to.
He said, “We have to mean it when we ask our friends, ‘How are you?’ We need friends who will genuinely check up on us, and ask us how we are.”

He stressed how one must never belittle pain, or compare our pain with that of a person who is depressed.

Seph impressed upon the viewer the importance of compassionate listening. He did not seem like your typical depressive, but in the video, he said he had mastered the art of faking it, even if he was so broken inside.

De Leon said that friends need to take time to notice any changes in one’s demeanor. “Irritability, isolation, changes in routine, lack of interest, lethargy, lack of motivation, calling at irregular hours to talk can be subtle signs of ongoing mood symptoms.”

Seph mentioned how he wished he had more people in his life he could have turned to when the bad thoughts would come.

“At times, the depressed person may want to be left alone,” De Leon said. “However, letting them know we are available should they need to talk and making sure we practice compassionate listening and acknowledge their pain is the best that we can offer at that time.”

When someone has mental health issues, De Leon said that validation is the light that keeps them going. “It provides them hope that finally somebody gets it, that someone knows where they’re coming from. Providing validation can be difficult for a lot of us, because we carry our own perceptions on how to face challenges. We try our best not to minimize their symptoms, even if there is a risk of sounding critical.

“I often recommend to my students and residents that most of the time, the best validation is to just be there and listen.”

Many who have committed suicide didn’t show signs at all. “Seph, because he conducted himself well, may have fallen under this category,” De Leon said.

“However, in his video, he left clues. Often people expect to hear the response ‘Fine,’ but the tone with which people respond and their body language can reveal a lot.”

De Leon suggested encouraging further dialogue by offering to meet up and talk. “From time to time, we need to pause and be attuned to the people around us, especially those we perceive as doing okay.”

It appeared that Seph was not taking any medication, and did not seem to be a believer in anti-depressants. The use of medication for treating depression must be prescribed by a psychiatrist.

If the patient is not comfortable with it, or is experiencing side effects, it must be reported to the doctor. One must not arbitrarily stop medication, without seeing a doctor.

Depression can be treated, and there must be no shame in seeking help and taking medication.

Together, the patient, his or her support system, and the doctor must work closely to determine the best way to treat depression.

If you are depressed or experiencing suicidal thoughts, help is always available.