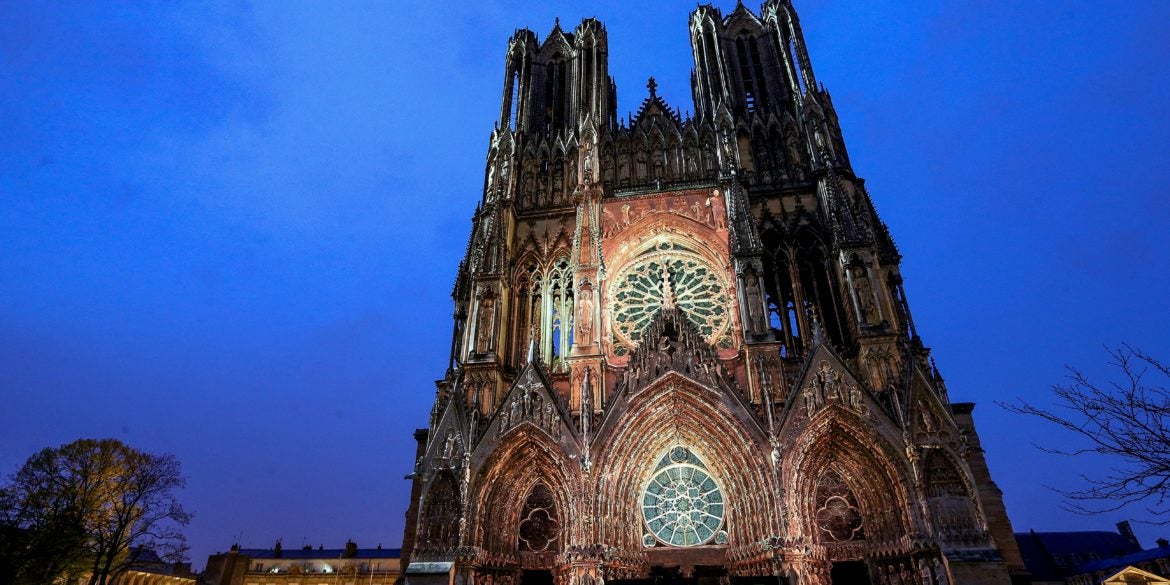 The Cathedrale Notre-Dame de Reims is lighten on April 16, 2019 with a message reading in French "Reims watches over Notre-Dame" a day after the fire that ripped through Notre-Dame cathedral in Paris. (Photo by FRANCOIS NASCIMBENI / AFP)

Why the ‘legendary’ Notre-Dame roof astounded the Middle Ages

By: Marie Wolfrom via AFP

The charred roof of the Notre-Dame Cathedral in Paris was once a legend that “astounded the Middle Ages” and still fascinates master carpenters, Thomas Buechi of the Charpente Concept group told AFP.

What does the roof represent for  master carpenters? It is possibly one of the greatest masterpieces for French master carpenters. For a painter it would have been a bit as if the Mona Lisa went up in smoke.

The framework (known as “the forest”) was mythical, it was a legend for several reasons. It was so complex that it astounded the Middle Ages.

First of all, it took 50 years to prepare the timber. They began cutting the trees, around 1,500, sometime around the year 1200.

These were laid for a year with the top turned to the North to align them with the energy of the earth.

The bark was then removed and they were immersed in a swamp for 25 years to preserve the wood from fungus and insects.

Around 1225, the wood was removed from the water and the trunks were sawed into beams and allowed to dry for another 25 years.

Given average lifespans at the time, it meant that most of those who cut down the trees never saw the roof structure.

Who erected the more recent spire that collapsed? The French revolution left the cathedral in ruins. In the middle of the 19th century the decision to redo the spire was made.

In addition to the architect, Eugene Viollet-Le-Duc, there was a key figure who has been forgotten, Henri Georges, a master carpenter.

He was a master of “operative geometry” and his nickname was “Angevin, the child genius.”

When I saw the spire burn and fall yesterday, he was the one I thought of.

Which challenges face those charged with the reconstruction? We do not know yet how much the stone has suffered. That everything is still standing is a miracle.

For the roof structure, either they will reconstruct it like before, or do something completely different.

Rebuilding this masterpiece would involve all professionals in the wood sector. I think there will be a massive mobilisation.

They should not do as they did for the Chartres Cathedral, where the roof burned in the 19th century and was replaced by a metal framework.

In France there are plenty of oaks, the wood will not be a problem. They could use old trees and leave more space for young ones to grow.

In the Troncais forest (in central France) there are oak trees that are several hundred years old.

They could never prepare the wood the way it was done in 1200. But today’s technology would allow work to proceed faster. You could foresee starting to receive beams two years from now, and replace the roof structure in the next five years.