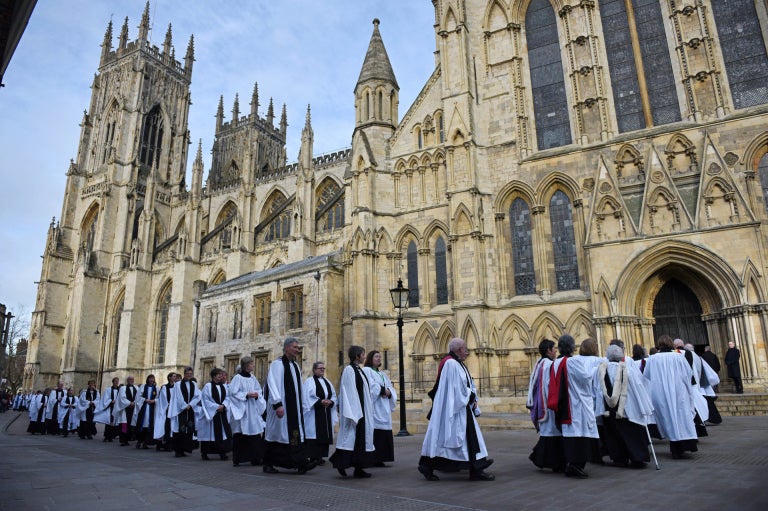 Clergy process into York Minster to attend a ceremony for the consecration of The Reverend Libby Lane at York Minster in York, northern England, on January 26, 2015. The Church of England ends centuries of male-only leadership Monday when it consecrates its first female bishop in the face of fierce opposition from traditionalists. AFP PHOTO / OLI SCARFF (Photo by OLI SCARFF / AFP)

A bolt of lightning pierced its tower and flames licked across its thick oak roof. Thirty-five years ago, it was York Minster in northern England that went up in flames.

Chunks of timber soon came crashing down and John David, a stonemason, had to halt his rescue of the sacred treasures trapped inside one of Britain’s most famous churches.

David went on to help restore its glory through meticulous effort. He thinks Notre-Dame in Paris, which was engulfed by flames on Monday, can do the same over time.

“Nowadays everyone wants things done in a hurry,” David said, in reference to French President Emmanuel Macron’s vow to rebuild the Parisian icon by the time the city hosts the 2024 Olympic Games.

“The buildings are more important than, I think, individual people. It’s the nation. It’s the country. It’s the Church.”

The stories of York Minster and Notre-Dame have faithfully traced each other’s footsteps over the centuries.

Britain’s cathedral was completed in 1360 — just 15 years after Notre-Dame — and shares the same building materials and shape as its Parisian cousin.

David was one of a dozen or so stoneworkers in York when its “minster” — an Old English word that means a large or important church — nearly went down in flames in 1984. He counted on his dusty fingers all the unknowns facing Notre-Dame over the coming months and years.

“These buildings move. They are not cemented together,” he said.

The danger of Notre-Dame losing its spire and roofing is that much less weight now presses down on the supporting walls and vault — the stone arches holding up the ceiling.

“The timber roof was performing the function of holding it together,” he said.

Geoff Brayshaw has other worries. He was just 27 when he was part of a crew charged with putting together all the woodwork needed to replace York Minster’s roof.

The joiner thinks the most important job facing Parisians is putting up a temporary canopy over the cathedral to keep out the rain.

“Our biggest problem was that we kept flooding,” Brayshaw recalled.

York Minster architects and engineers eventually drafted a blueprint that allowed them to get everything done in four years.

But it was a much smaller project — and one helped by the fire getting trapped inside a single tower and being doused before it raced along the latticework.

Brayshaw and his team decided against tempting fate again. They installed fireproof compartments into the roof that should keep all but the most persistent flames from spreading. Sprinklers were not an option because of the water leakage risk.

“I don’t think you can make anything fully fireproof,” said Brayshaw. “We obviously went to town trying.”

The Church of England has already offered to share its long renovation experience with its French colleagues, yet Brayshaw doubts his chances of showing off his woodwork skills in Paris.

He said with a laugh, “I think by the time they have it all sorted out I’ll have retired.” CE/JB

Why the ‘legendary’ Notre-Dame roof astounded the Middle Ages