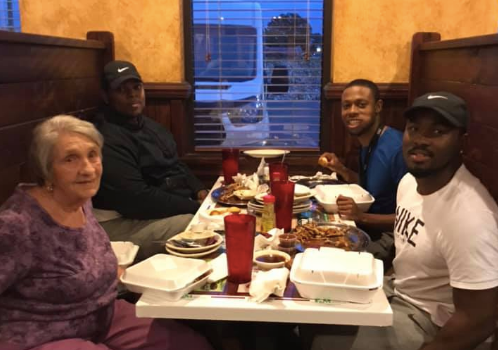 Three young men from Alabama, United States have been lauded for asking an elderly woman in a restaurant to join them when they saw her eating alone.

Jamario Howard was with his two friends in Brad’s Bar-B-Que in Oxford when he first saw the elderly woman, identified as Eleanor by local Fox News reports, eating alone.

“While waiting on our food I noticed an elderly woman sitting alone,” he said via Facebook on April 19. “My exact thoughts was ‘dang I’d hate to have to eat alone.’”

Howard’s Facebook post has since gone viral, garnering almost 200,000 reactions and 52,000 shares since the time of posting.

He added that he approached Eleanor and asked if he could sit with her. They talked for a short while, before she mentioned to him she just lost her husband and the following day would have been their 60th anniversary.

The meeting touched Howard and he asked Eleanor to join them in their table instead, which she gladly accepted.

“I instantly gave my condolences and asked her to come eat with us, which she was excited to do,” he said. “The point in this is always be kind and be nice to people. You never know what they are going through.”

He also shared meeting Eleanor changed his outlook on life and how he looks at the people around him.

“Everyone has a story so do not judge!” Howard said. “And people I can’t stress this enough. GO SEE YOUR MOM AND YOUR GRANDPARENTS. They miss you!” JB