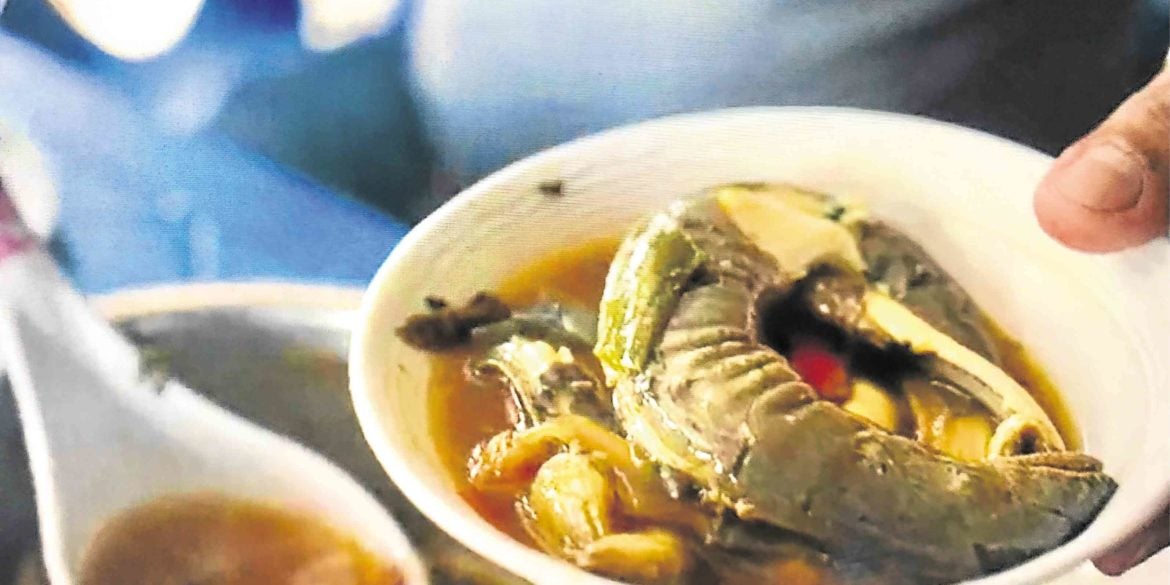 For the Philippines they decided to do Cebu rather than Manila, which I thought was an interesting choice; and I thought I was going to see the usual suspects trotted out and have to gnash my teeth at inaccuracies and omissions, but—well, I actually really enjoyed it, and now I could really use a cup of instant noodles. And a flight to Cebu.

Myke Sarthou Tatung, sporting a jaunty beret that covers the gleaming pate by which he is easily recognized, was intoning slow, deliberate utterances in a Shakespearean manner, rather than the rapid-fire babble which he usually greets you with. I can think of very few local hosts who could have done better than him—a wise choice, and a wise choice of dishes, as well.

I had frankly never heard of tuslob buwa before in my life, and I have always been in search of anything offal and innard-based, because I believe them to be the most interesting and freshest part of the animal. Tuslob buwa is described as a kind of fondue, into which the clumps of hanging rice in their woven containers are slit in half and dipped—all right, yes, rather like a fondue.

And Entoy’s bakasihan, the restaurant at the end of the world, will soon be deluged by tourists looking for the miraculous saltwater eel soup which he describes, with a cackle, as the local Viagra.

I like the direction that this show is taking, and I intend to watch the episodes, perhaps before dinnertime or if I have leftover pizza in the fridge.

Meanwhile, I have a friend who has a library of over 500 cookbooks, many of them unopened, most of them leafed through, but not a single one from which he has actually cooked from. A failure of the recipe book, or of the man buying them? I saw that it’s neither.

There’s more than one way to read a recipe book, aside from its main purpose as a set of instructions to be followed in order to replicate a dish.

I used to love buying books of interiors just for the dreamy escapism. Now I buy cookbooks for the stories: I love the little vignettes that the editors force the authors to write about what this dish meant to their family, and whether the name was actually related to the sayings of the Buddha, and all that sort of thing. I love food manifestos, restaurant-centered glossy food books, as much as I like my culinary history and my food studies theory.

Even while the cooks featured on “Street Food” are more accessible, price-wise, than the Michelin-starred chefs from “Chef’s Table,” it doesn’t mean that we’ll be able to eat there at the drop of a hat. Interestingly, most of the destinations are in Asia, and a cheap plane fare away; the closest, not even requiring a passport, the four chefs featured in the episode on Cebu.

For a Filipino, it is delightful that they were able to find something that was not hackneyed in their representation of Philippine food. It is to be hoped that this portrayal of the Cebu food scene takes foreigners beyond adobo and halo-halo in their appraisal of Philippine cuisine.

I also hope that the beautiful restaurant by the sea portrayed in the series is able to cope with the strain of culinary tourists descending on it in droves—this, more than anything else, is the difference between “Chef’s Table” and “Street Food.”

In the former, the quid pro quo of exposure for the chefs was clearly worth it for their lives to be featured; with “Street Food,” we don’t know how their lives will be changed by their sudden fame and the spotlight of publicity on their restaurants or stalls. Like a war correspondent, the journalists’ desire to tell a good story and put a human face on such myriad diversity runs the risk of exploitation—or changing the course of their lives in a way that’s not for the better.

Despite these reservations, it’s a series that’s humane and compassionate as it is mouthwatering. Highly recommended—and make sure there’s something in the fridge for later. —CONTRIBUTED