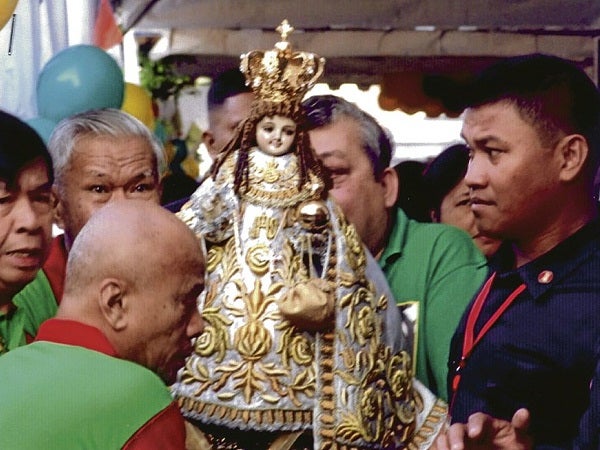 The childlike devotion of the Filipinos to the Holy Child is phenomenal and profound. Filipinos don’t seem to tire showing their love for the Holy Child.  The long procession of the Congregacion del Santissimo Nombre del Niño Jesus last Sunday was proof of this. It took eight hours (3 p.m. to 11 p.m.) with 200 carrozas parading from the Philtrade to the Quirino Grandstand on Roxas Blvd.

People lining up two sides of Roxas Blvd. waited patiently for the procession. They had their own little images of the Sto. Niño in their arms. Those who joined the procession did so as fulfillment of a panata (vow). Some asked for favors that could mean life or death.

Mounting one’s image of the Sto. Niño in a carroza for the procession is another sign of one’s faith that one’s prayers would be answered, or a way to thank God for answered prayers.

One image of the Holy Child worshipped in Mexico, Spain and Latin America is the Sto. Niño de Atocha. Devotee, fashion designer Nolie Hans came to know about the image when it was unexpectedly offered to him years ago after his mother Teodora Hans was diagnosed of cancer. Nolie and his siblings found comfort in their devotion to the Sto. Niño, its image enshrined in Nolie’s house.

I myself pray to Him and my prayers are always answered.  The image was part of the “Fiesta del Sto. Niño 2012” and the Jan. 29 procession.

The pious tradition of Santo Niño de Atocha is a story of history and devotion. The devotion was originally to Mary. As is proper, before a child is asked to do something, the petitioner must first ask permission from his mother. Thus, the prayers and novenas to the Infant of Atocha begin with a prayer to Mary, Our Lady of Atocha.

Our Lady of the Atocha

Tradition says devotion to Our Lady of Atocha and her wonder-working child originated in Antioch, and that St. Luke the Evangelist was the sculptor of the first mother-and-child image. “Atocha” could be a corruption of Antiochia.

Devotion to Our Lady under this name spread rapidly, and by 1162, a beautiful medieval statue was in Toledo, Spain, in the Church of St. Leocadia. In 1523, Charles V of Spain financed the construction of an enormous temple and placed the statue under the care of the Dominicans, promoter of the rosary whose Our Lady of the Rosary depicts Our Lady with the Infant Jesus. The image of the Divine Child was detachable, and devout families would borrow the image of the infant for when a woman was about to give birth.

Even the priests who said Mass at the festival grounds of Sto. Niño de Providencia along Pijuan Street in BF Resort Village, Las Piñas, were amazed by the turnout of almost 5,500 devotees who came to be anointed with the holy oil. (The count was based on the number of food packages distributed.)

When I came in with fellow writer Vic Lactaoen, my heart skipped a beat at the sight of so many people. Fr. Gerard Deveza, healing priest, was saying Mass assisted by Fr. Pio Lomibao, OSB. The newly vested image of the Sto. Niño de Providencia was sweating with holy oil.

Thirty devotees from Dumaguete City came to give homage to the Sto. Niño on the 20th anniversary of the “miracle of the oil.”

Giving back to God

In his homily at the Mary, Mother of the Church in BF Resort Village, healing priest Fr. Corsie Legaspi said it is not enough to offer Thanksgiving Mass and donate to the church when one experiences a miracle healing of terminal diseases.

One has to do three things: 1) Be of good moral character; 2) Be humble; and 3) Be good.  He calls this “practicing equalibility. Patas-patas sa Diyos.”

Healing priest to the Holy Land

Healing priest Fr. Momoy Borromeo will lead pilgrims to the Holy Land on March 5, as pilgrimage chaplain of Adam’s Travel.

They will enter Israel by way of Cairo where they will reach the Dead Sea and Moses Spring.  On March 17, 13th day of the pilgrimage, the group will go up to Mount Nebo to view Canaan which God did not allow him to enter. For inquiries, call 5211651 or text Ana at 0908-5919908.

Happy Valentine’s to you

Our Lady of Lourdes

The Sancti Dei Healing Center in Los Baños, Laguna, will mark the 12th anniversary of the center on Feb. 11, feast of Our Lady of Lourdes, at 9:30 a.m. Healing Mass by Fr. Diwane Cacao.