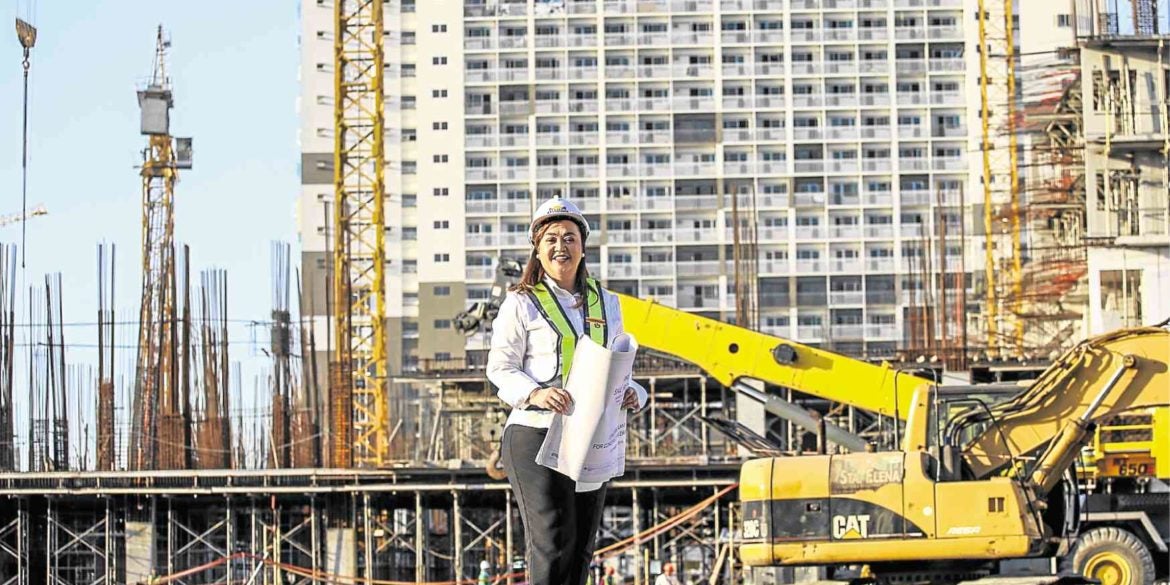 Who is Alice Eduardo—in a man’s world?

The almost life-size statue of the Virgin Mary is the dominant presence in the vast office of Alice Eduardo, as it must be in her life.

Setting foot in the office of her Sta. Elena Construction, walking past the foyer/lobby, conference rooms and finally into her room demarcated only by walls and doors of clear glass, you can’t avert your glance from the statue of the Virgin in the corridor, and another behind Eduardo’s desk.
It’s a soft, maternal symbol in a traditionally male-ruled construction industry, where Sta. Elena Construction, a firm Eduardo built from the ground up (literally), is now a major player, a multi-billion-dollar firm.

The Marian faith and the cutthroat construction business make up a world of contrasts in Eduardo’s life. But then, her life itself is a play of contrasts, if not an interesting paradox.

Bejeweled and in designer clothes, she’s one of the most photographed women today in Manila’s high-power events and dinners, which she attends regularly with her sisters Small and Melba. (She was Philippine Tatler’s December cover, photographed in her house in Beverly Hills in Los Angeles.) Yet not many know that from dressed-up dinners, she usually flits to any of her construction sites to check on the work in progress—even at night. From high couture/bling to hard hat—that pretty much sums up her long day.

Add to that her regular Marian devotion and a woman’s piety, and you get the enviable profile of a postmodern Filipino woman who’s good at building a business, raising a family single-handedly, doing the social whirl—and looking stylish while she’s at it.

Her high visibility on the lifestyle/social scene—and even in the hard news pages—drew media hounds to her tracks, including us. Who is she really? How did she crack a man’s world?

Eduardo comes from a relatively well-off family in Nueva Ecija, where she grew up and was schooled, the eldest of four. The family has had businesses in Nueva Ecija and Bulacan, from a bowling center, rice milling and trading to garment exports.

But while she grew up helping attend to these businesses, her interests, even as a teen, had been always in construction.

“As early as high school I would travel on my own to see as much of the country as I could,” she told Lifestyle in an interview. “I was impressed with the San Juanico Bridge and the Cultural Center of the Philippines, among others. I would marvel at these wonders of engineering, architecture and construction, and feel a natural desire to one day lead a team to build structures.”

And that desire was backed by an aptitude in math, it turned out.

After high school, she asked her father, Andres, if she could enroll in engineering. Expectedly, the answer was no. Her parents, both professionals, would have wanted her to go into law or medicine. She went into business administration instead, and graduated with that degree from the University of Santo Tomas.

All that time she was helping out in the family business, until a fortuitous encounter with her family’s client. She recounted in an interview with Philippine Tatler: “My first break came when our family’s rice mill was supplying rice to the office of Concrete Aggregates in the ’90s… they encouraged me to supply other items to them, steel splices in particular… It was at that moment I decided, ‘Well, no guts, no glory.’ That was also the day pile driving became part of my daily vocabulary… I figured I would learn what I needed to learn and do what I needed to do to make it happen…”

It became apparent that to this new college graduate, construction wasn’t only an interest, but also a passion. She was determined to learn how to build—by first supplying the piles driven into the ground to build the foundation of a structure.
‘Mahilig sa property’

“Passion ko talaga. In college, I’d invest in condominiums; my first was Amberland in Ortigas. Mahilig talaga ako sa property,” she told us.

This young entrepreneur noted the demand for cranes in building the substructure. She sought financial help from her parents. Her mother, Elisa, the businesswoman of the couple, had an initial misgiving to lend her money “for equipment for the business na di ka sure,” Eduardo recalled.

“My mom gave me property worth P15 million. But I needed four sets of cranes; that amount was good for only one. I needed P30 million.”

So she rented the rest. This was when she bagged the subcontract project to build the foundation for a powerplant in Calaca, Batangas through sheer grit. “The Japanese construction firm needed local partners, so I met with them. They asked me to show them my equipment. My equipment wasn’t enough for that big project. They needed four sets, which meant eight cranes… The company head talked to me and said he was giving me the project. I was shocked. He just made me promise that we’d finish the project on time. I gave my word.”

Then, the Asian Crisis happened in the late ’90s. Her business could have gone under, like many others, had it not been for her dogged determination to have her loans restructured, using her ability to bargain.

“The lesson for me then—never ever borrow on foreign currency. You’re not in control,” she told us.

Eduardo sat down with the US banks that provided her the loans, reminding them that she dutifully used US-made equipment even if those from other sources were cheaper and more efficient. In time they came around, and she was given breathing space.

During the Asian Crisis, instead of selling her equipment to the Middle Eastern countries which were enjoying unparalleled growth, she stuck to her business, grateful for the restructured loans.

Then the fortuitous client came, like a lifeline—SM Mall of Asia. Sta. Elena bagged the contract to build its substructure.
She delivered on time—“Sa MOA, commitment ko six months, tinapos ko. Natuwa sila. Yung iba kasi hihintayin ang collection; matagal yun. I’d do something so that I could get the funds to finish the project.”

Soon Sta. Elena was doing the other buildings in the MOA complex, including SM Arena and the SMDC condominiums. Then followed the Entertainment City—Sta. Elena built the foundation for Solaire Resort and Casinos, City of Dreams, Okada Manila and Resorts World Hotel and Casino.
Natural gas

Her portfolio soon included the subcontract work (her firm doesn’t deal with the government) for infrastructure projects: e.g. bridges from Ilocos to Pangasinan, NLEX and SCTEX, and close to her heart, natural gas-fired powerplants. Sta. Elena has built more than $1.5 billion worth of energy infrastructure.

Not bad for a non-engineer. She had the passion to learn the job in a traditionally man’s world. “I love reading (structure) plans. I can analyze plans fast,” she said quite honestly.

It must be a testimony to a woman’s leadership that the engineering staff has stayed on from her firm’s early days.

Eduardo apparently also built her company on firm relationships. Call it good karma—one construction executive gave the project to her startup firm in the ’90s, in significant part, because, Eduardo would learn much later, he was able to finish college with Eduardo’s grandfather’s financial assistance.

Another was a man Eduardo helped a long time ago before the Asian Crisis—an assistance she had almost forgotten about until after the Crisis, when he went back to her to give her projects.

It’s not surprising that in the past decade, as her business portfolio grew, so did her humanitarian projects. She believes in paying it forward or giving back.

She’s financed the building of churches, classrooms, Habitat for Humanity. Significant among these was the construction of the Pediatric Oncology Isolation Ward of the Philippine General Hospital in 2014, for cancer-stricken children from poor families who not only could not afford the treatment and medicines, but also didn’t have the space to stay where they could be in isolation, and their weakened immune system protected from contagious diseases.

Sta. Elena also built the dormitory where the caregivers or relatives of the young cancer patients could stay while their wards are in confinement.

Another big project is the building of classrooms and theater for the Tuloy Foundation, the complex in Muntinlupa for abandoned youth. It’s a residential care institution where the youth are given free education, particularly vocational and technical courses.

Indeed, this woman has gone on from constructing steel foundations to constructing lives. Alice Eduardo is an inspiring story at a time when much of the world is engaged in self-demolition.