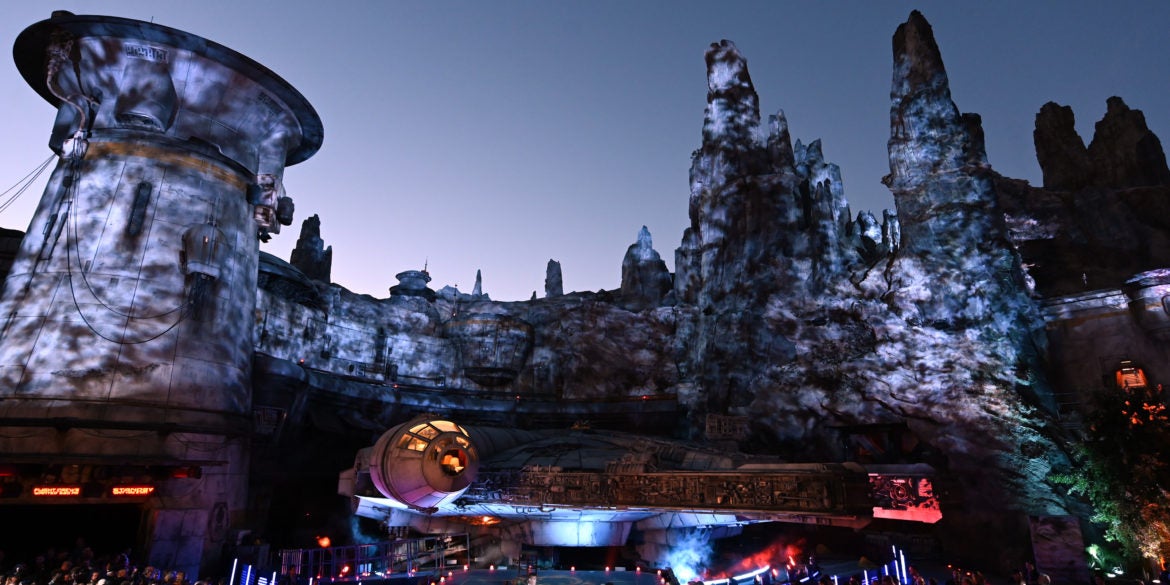 ANAHEIM, CALIFORNIA - MAY 29: Details of Star Wars: Galaxy's Edge Media Preview at the Disneyland Resort on May 29, 2019 in Anaheim, California. Amy Sussman/Getty Images/AFP

Hundreds of Star Wars fans lined up before the crack of dawn on Friday outside Disneyland as the California park opened the doors of a new mega-attraction based on the iconic film series.

The $1 billion theme park, called “Star Wars: Galaxy’s Edge,” was open only to lucky visitors who managed to reserve tickets ahead of time that allowed them to roam the new land for a total of four hours.

Only those with reservations will be able to visit “Galaxy’s Edge” for the first three weeks, after which it will be open to the public.

“‘Star Wars: Galaxy’s Edge’ is absolutely amazing and we are thrilled to finally share it with the world,” Chairman and CEO of The Walt Disney Company Bob Iger said at a pre-opening ceremony on Wednesday.

“Now, for the first time, fans will be able to immerse themselves in the iconic stories that have captured audiences’ imaginations for decades and live their own Star Wars adventures in the most creative, innovative and ambitious land we’ve ever built.”

The park features rides, including on the Millennium Falcon, as well as Star Wars characters such as Stormtroopers, the mighty Chewbacca and Rey, a hero of the resistance in the futuristic land of Batuu.

On “Millennium Falcon: Smuggler’s Run,” guests will go on a cargo run that features multiple storylines depending on how they pilot Han Solo’s beloved spaceship.

Waiting for the longest time

Star Wars fanatics will also be able to down exotic drinks such as spicy Bloody Rancor or Carbon Freeze at Oga’s Cantina or refresh themselves with Blue or Green Milk.

And if they have any money left at the end of the day, they can fork out $200 — before tax — to build their own lightsabers at Savi’s Workshop or spend nearly $100 for a custom droid.

A similar Star Wars park will also open at Disney World in Florida at the end of August.

Miguel Langarcia, one of the lucky fans who was able to reserve a ticket for the Friday opening in California said he was over the moon at being among the first to experience the new attraction.

“I had four computers open at one time, trying to get a reservation,” he told AFP as he entered the park. “I finally got in, so I’m excited to go today.”

Joe Kaniwa, another visitor, said he didn’t mind the steep entrance price of nearly $150 per-adult given the experience.

“They want to make a lot of money, and they are making money,” he said. “But they also want to make people’s dream come true.

“Like you can have people from all generations, you know 40-, 50-year-olds, who have been waiting for this for the longest time, and now they can be part of (this) world.”