Why do people keep dying in the Grand Canyon? | Inquirer Lifestyle ❮ ❯ 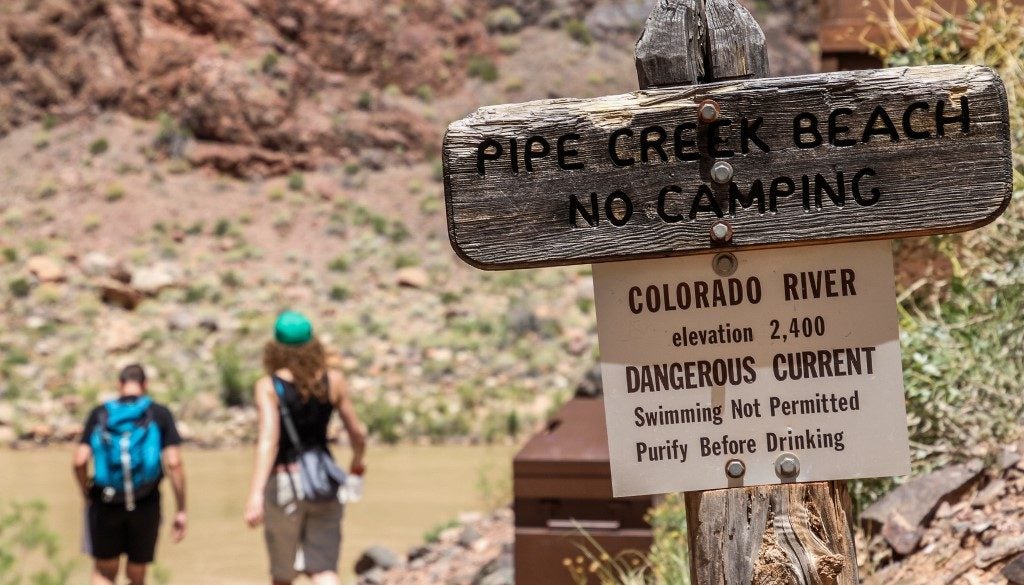 Posted signs warn tourists and hikers of the dangers of hiking in the Grand Canyon on May 14, 2019. - The Grand Canyon experienced an unusual number of accidental deaths this spring. Despite calls for caution, the risky behavior persists. (Photo by Sébastien DUVAL / AFP)

Why do people keep dying in the Grand Canyon?

Attention, Grand Canyon visitors — watch your step before attempting a selfie from the edge of the vertiginously deep and perilously steep US landmark.

The national park surrounding the enormous canyon — the second-most visited US national park, after the Great Smoky Mountains in the country’s southeast — has experienced a distressing surge in fatal accidents, with at least four visitors dying in as many weeks in March and April.

The views that draw millions to the park in the high Arizona desert are stunning, to be sure, both in their rich earth hues and in the sheer immensity of the gap cleaved over eons by the unceasing Colorado River as it winds sinuously through the canyon bottom.

But the views can also distract or disorient visitors — some of whom take risks despite park rangers’ constant warnings — and the result can be fatal.

The body of a Japanese tourist was the first one found this spring, located in a wooded area some distance from the rocky cliffs.

Then came three fatal falls, including that of a fifty-something tourist from Hong Kong who toppled over the edge while snapping photos.

The park has placed protective barriers at some popular vista points, but “we don’t want to put barriers everywhere,” park spokeswoman Kris Fister told AFP. “The specialness about parks is not being enclosed.”

“You don’t have a barrier between you and this amazing place,” she added, “but you have to pay attention.”

“We tell people to stay on the designated trails and walkways and to keep a safe distance from the rim” — and of course, to pay attention when taking pictures, said Fister, dressed in the gray military-style shirt and khaki pants of a park ranger.

But at the park’s Mather Point, which offers especially scenic views not far from the visitor center on the canyon’s South Rim, the message does not always get through.

This natural vista point, the most heavily visited in the park, may be the spot in the US most often captured in visitors’ selfies.

From here to the canyon’s North Rim is a distance of 10 miles (16 kilometers).

There are protective barriers. But not far away, a young woman ventures to the very edge of the cliff.

“We can see well enough from here,” British tourist Kathryn Kelly sniffs dismissively, looking at the risk-taking woman. “I don’t see the point stepping closer to the edge.”

“I heard of a man who died trying to take a selfie, and I’m struggling to feel sorry for him,” Kelly said. “It’s a kind of natural selection.”

Of the dozen people who, on average, die each year in the canyon, relatively few fall to their deaths, according to park service statistics.

Most deaths are linked to the dramatic change in altitude and to dehydration in the crushing summer heat faced by hikers — despite the frequent warning signs that say things like “Don’t become a statistic” and “Down is optional, up is mandatory.”

But for those who make it to the bottom of the canyon, near the turbulent, muddy waters of the Colorado, Phantom Ranch offers a welcome oasis, a place to rest and spend the night after long, draining hours of hiking.

Among the books on a shelf in the ranch’s dining room is one that lists every death registered in the park: “Over the Edge: Death in Grand Canyon.”

Falls, flash flooding, drowning, storms, snakes, suicides, even murders … there are as many ways to die in the Grand Canyon as there are ways to photograph (and of course Instagram) it.

Jim Stanley, a 71-year-old from Michigan, read the book before taking on this dangerous wonder of nature, where nearly seven million visitors are expected this year for the 100th anniversary of Grand Canyon’s classification as a national park.

“I haven’t been discouraged; I’m now aware of the risks,” he said, his hiking pants proudly held up by a pair of suspenders in the red, white and blue of the American flag.

“Too many people take the Grand Canyon for granted,” he added. “But it’s not Disneyland.”

There has always been an element of mystery, or mysticism, surrounding the park and its awe-inspiring landscape. The numerous accidental deaths in its vast territory through the years have even given rise to a sort of earthbound Bermuda Triangle vibe.

Two airplanes once collided above the canyon, claiming 128 lives in what, at the time, was the worst commercial aviation accident in US history.

That was in 1956, long before the advent of the selfie.