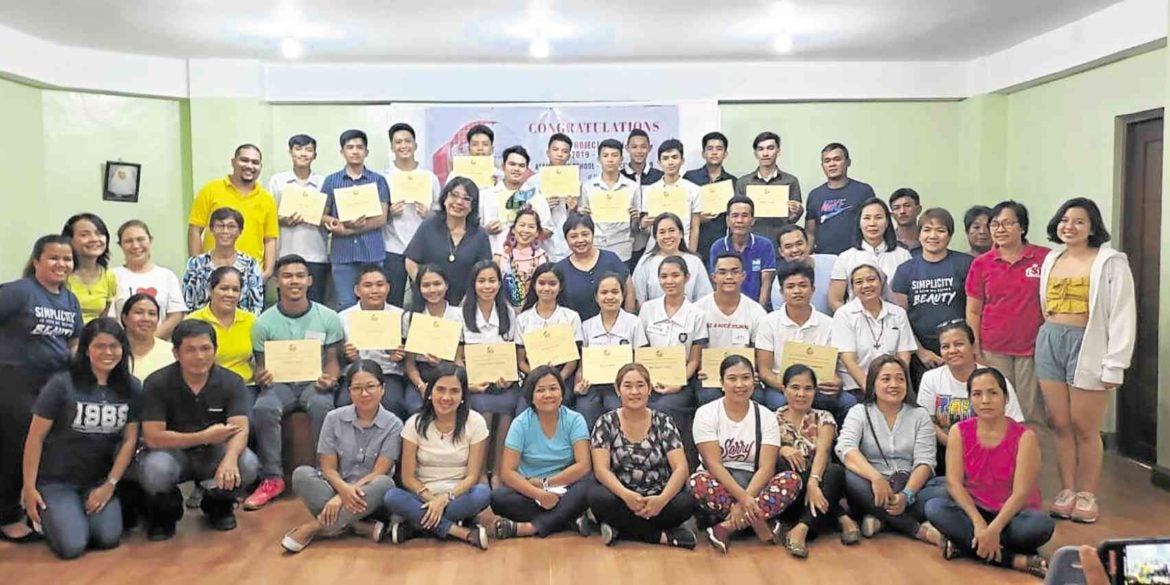 Assumption HS ’81 classmates with 20 scholars and administrators of Assumption School in Passi, Iloilo

Forty years after high school, Assumption HS Batch ’81 wants to give back

Some days are just more heartwarming than others. This week, I was at the Assumption School Passi, Iloilo, for the awarding of scholarships.

Speaking in his native Ilonggo, the father of scholar Starwin Panes expressed his sincere gratitude for the education grant given to his son. Being a farmer, the dad could not afford to send Starwin to high school anymore. He said the scholarship was the best Father’s Day gift he could ever have received, and he has high hopes for Starwin, who wants to be a doctor someday.

Education is truly the gift from parents who work hard to make a brighter future for their children. In preparation for our Ruby Jubilee in 2021, Assumption HS Batch ’81 Foundation found 40 scholars and paid for their senior year in Assumption Iloilo. Forty years after high school, we want to give back and share our blessings.

Our foundation cochairs, Maripi Jalandoni and Popsie Gamboa, chose the Assumption School in Passi, Iloilo, for this project. Funds were raised from classmates here and abroad just in time for this school year.

Our foundation has embarked on annual projects to help the less fortunate, ever since our Silver Jubilee in 2006. For this Ruby project, the movers and shakers include the committed administrators of the Assumption School Passi: principal Stella Tagcong, counselor Jennifer Vasquez and coach Andren Barela, who painstakingly selected our scholars; Sr. Mary Joseph, r.a., Superior of the Assumption Schools in the Visayas; and the faculty of Assumption-Passi, who will guide and nurture our scholars in the next two years.

Special thanks also to our forever sponsor and friend, Albert Arcilla, president and CEO of The Covenant Car Company, exclusive distributor of Chevrolet and MG cars in the Philippines; Jan Andrew Po, owner of Chevrolet-Iloilo, for lending us Trailblazers; and Mark Joseph Espino and Jameson Cordova, our super drivers and tour guides.

A big “thank you” to Seda Atria Hotel’s GM Joseph del Rosario, front office manager Carlos Lavares, and sales manager Neljun Guion for truly making Seda Atria our home in Iloilo. Their assistance and service were above and beyond. They found me costumes for my coming wedding anniversary that has an African theme. And to newfound friends who cheered us on: salamat to Tita Elen Salazar for hosting us, and Lucia Lopez-Cachuela for graciously opening Nelly Garden for us.

Between all the touring, we were also able to shop at several malls, including Wilcon Depot Iloilo and SM Iloilo. Malling in the Philippines has become more exciting than ever as SM Supermalls, in partnership with the Department of Tourism, launched its campaign “Malling Is More Fun in the Philippines” at SM Mega Fashion Hall, treating mallgoers to activities full of fun, food and festivity.

Steven Tan, SM Supermalls COO, said that SM’s partnership with DOT celebrates the best of the Philippines through a range of festive gatherings. For our 25th wedding anniversary, Steven was able to arrange for us to use the entire SM Aura Christmas decorations that include the Big 5 of Africa and more. My hubby Dennis will really be surprised with all the details of the celebration.

These days, Dennis’ eyes are solely on the wheels of a Maserati Levante. After the unforgettable weekend in Balesin Island Club where he tested Maserati’s first-ever SUV, he is destined to own one. It’s also so fitting that the Trident logo is symbolic of his fave sports, underwater hockey and surfing.

Dennis is the competition manager for underwater hockey in the coming Southeast Asian Games (SEAG), to be held at the Vermosa Sports Hub in Imus, Cavite, later this year. It’s the first time that underwater hockey will be played in the SEAG.

In a similar vein, the Maserati Levante is a first. The new SUV completes the Italian carmaker’s product lineup. The Levante offers a perfect balance of on-road drivability and off-road capability. The luxury SUV is based on an evolution of the sedan platform designed exclusively by Maserati. The chassis features a front double wishbone and rear independent five-link layout. It incorporates advanced functions such as air suspension and the intelligent Q4 all-wheel drive system.

During his test drive, Dennis, at one point, let loose the Levante’s 3.0-liter V6 gas engine, generating 350 horsepower and 500 Nm of torque that catapulted the beast to triple-digit speeds along Balesin’s airport runway. The Levante packs two versions, with either a 350- or 430-horsepower engine. The more powerful variant makes it possible for the Levante to reach 100 kph from a standstill in just 5.2 seconds, up to a top speed of 264 kph.

For Father’s Day next week, shop at Georg Jensen, a renowned Danish brand at Shangri-La Plaza. Under the distribution of Living Innovations Corp., Georg Jensen’s exciting new chapter begins with a Scandinavian-inspired store interior carefully curated with a range of jewelry and homeware.

With a storied history that spans more than a century, Georg Jensen is now ready to engage with discerning customers who seek out the very best in style and quality. The brand’s jewelry line ranges from daily-wear luxuries like the Offspring collection, to quietly elegant statement pieces meant to be passed on as precious heirlooms, like the Fusion collection. Its homeware includes classics by legendary designers such as Henning Koppel and Arne Jacobsen, as well as pieces by today’s most progressive names and forward-thinkers like Ilse Crawford and Patricia Urquiola.

In closing, I’d like to invite you to the Philippines’ grandest ballet event of the year, the quintessential classical story, “Swan Lake.” Stars from the famous Bolshoi Ballet headline the show that runs at the New Frontier Theater, Araneta Center, Quezon City June 14-22.

Bolshoi Ballet principal dancer Alexander Volchkov and prima ballerina Nina Kaptsova take on the lead roles in the story widely considered as the ultimate ballet fairytale. Joining them are an all-Russian entourage of 80 performers, the Moscow Ballet “La Classique.”

The classical ballet company was founded in 1990 by the Union of Theatre Activists of the USSR, and features an all-star cast of top talents from the most prestigious choreographic schools in Russia.

This event is made possible through the support of Philippine Tatler, along with The Philippine Star, Philippine Daily Inquirer, Business Mirror, ANC, CNN Philippines, Fox Life and NYXSYS Philippines, with Crossover 105.1 as the official radio station partner. Tickets are available at Ticketnet and Ticketworld, with discounts for students, seniors and PWDs, groups of 30 and more, and MasterCard holders.