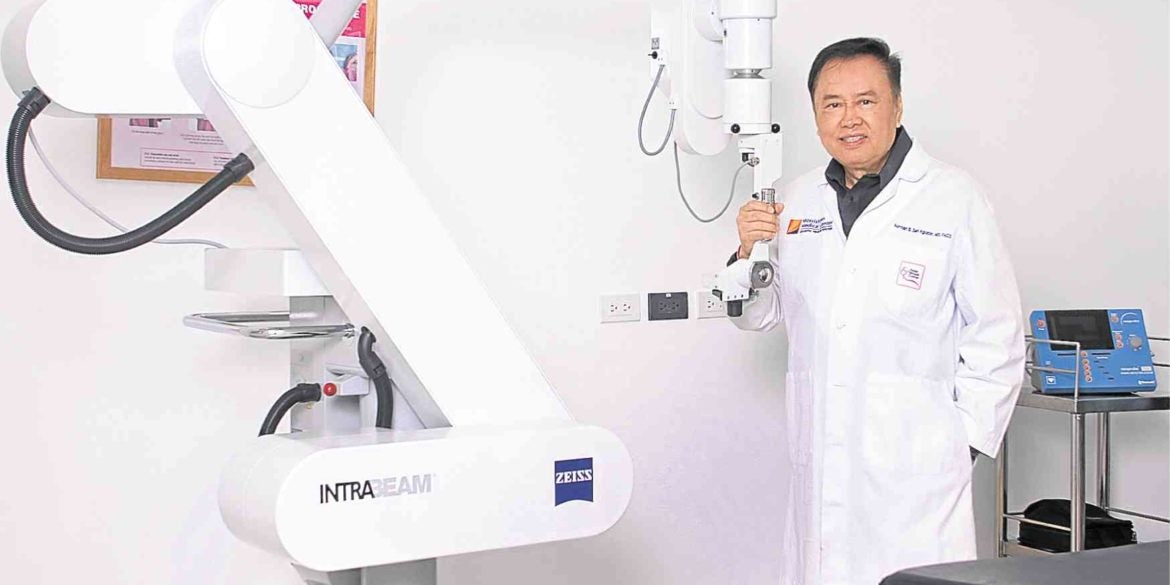 Surgical oncologist Norman San Agustin beside the Intraoperative Radiation Therapy equipment that radiates the surrounding tissues after the tumor has been removed. It involves one session with less side effects. —photo by Nelson Matawaran

The Philippines is reported to have the highest incidence of breast cancer in Asia—and the lowest survival rate.

In the Calabarzon region alone, the Philippine Cancer Society-Manila Cancer Registry and the Department of Health-Rizal Cancer Registry showed an increase in the number of cases from 1980 to 2002.

It is estimated that one in four women develops breast cancer. More than half of them die due to lack of, or inadequate, treatment.

Dr. Norman San Agustin, a balikbayan surgical oncologist specializing in breast cancer, has made it his life’s mission to provide breast cancer management services to patients from all walks of life.

It is an ambulatory (not hospital-based), up-to-date, integrated care facility that aims to elevate the total patient experience, from breast examination, through prevention, diagnosis, treatment, to aftercare.

The business model is a for-profit organization with philanthropic impact.
“After all the overhead expenses are paid, the remaining profit goes to charity,” says San Agustin, ABC’s president and CEO whose professional fees are pledged to his cause.

“(Our message is) that early diagnosis, treatment and affordable care are the keys to survival. Our mission, alongside enhanced patient experience, is to provide them with the latest technology so they don’t have to travel abroad. Our vision is to raise enough funds to sustain our projects so we can continue to secure resources for those who can’t otherwise afford (screening and treatment) and provide the best service for those who can. Everyone, rich or poor, is entitled to the same level of care,” says San Agustin.

He warns against negligence in breast screening. “Death from breast cancer doesn’t come suddenly. The patient dies very slowly, over months or even years.

“First, the cancer spreads in one breast, then proceeds to the other breast before it goes to the lungs and brain. It is a tragedy because breast cancer is 100-percent curable.”

The facility operations are patient-centric, convenient and stress-free—even the wait period is minimal.

Patients who insist on discretion are directed to a dedicated lift that opens to a separate entrance to ABC and, finally, to the Very Private Individuals room, for consultation and discussion of their medical history.

The consultation includes a breast ultrasound procedure in the examination room, which observes strict standards of cleanliness to prevent hospital-based infections.

“It’s sad that women are remiss in the aspect of prevention,” San Agustin laments.

All that a woman needs, he says, is regular breast self-examination or monthly examination by a doctor, annual mammography and then, where warranted, an early diagnosis through prompt consultation with a breast surgeon.

This oncologist summarily dismisses articles on the internet claiming that experts disapprove of mammograms (breast X-ray).

“A mammogram is still the gold standard for screening,” he stresses.

When the mammogram results show areas of density or calcification, a focused ultrasound or molecular breast imaging (MBI) is the next step.

He notes that 60 percent of Filipino women have dense breasts. “The dense breast registers as white (in the imaging), just like cancer cells.”

The MBI uses a chemical compound called sestamibi, and a special camera that detects tissue activity. Sestamibi, injected into the vein in the arm, traces the color of cancer cells from white to black.

The special camera picks up 400 percent more imaging than mammogram for early detection.

San Agustin proudly notes that ABC is the only facility in the country that offers MBI.

Once an abnormality is determined, the patient undergoes a biopsy.

Usually, the procedure is performed with a knife. ABC uses an ultrasound-guided needle to puncture the suspicious mass or tumor.

San Agustin explains: “The needle takes a tiny piece of tissue from the tumor. The pathologist then determines if it is malignant or benign.

“If it is benign—unless it is declared ‘premalignant’—we usually don’t even bother to take it out.

The current standard of care, San Agustin says, is breast preservation instead of mastectomy or surgical removal.

He cites “neoadjuvant therapy” for locally advanced cancer (metastasized beyond the breast).

“Before surgery, the patient gets chemotherapy to reduce the size of the tumor down to a point where the breast can be preserved for sure.”

ABC has introduced intra-operative radiation therapy (the IORT), an outpatient single-radiation procedure. The tumor is removed while the patient is asleep.

Intense energy rays and protons target the surrounding tissue after the tumor is extracted. The procedure takes 15 to 30 minutes.

“Burning the whole breast invariably involves the lungs and the heart,” says San Agustin. “The IORT eliminates that risk.”

If the patient is inclined, plastic and reconstructive surgery are further options.

To help make breast cancer screening accessible to the poor, ABC recently organized “Celebreast” at Grand Hyatt, a fundraiser for the purchase and maintenance of a van that will serve as a mobile imaging unit, and for the services of a nurse and breast specialist.

The “Mammo on Wheels” will go to communities where breast screening and diagnosis are not available.

If surgery is required, the patient is sent to either the De La Salle Dasmariñas Hospital or to the Asian Breast Centre. ABC’s initial coverage are the indigent communities around Cavite. The ultimate goal is to bring the Mobile Breast Center around the country.

San Agustin’s advocacy was born out of a family tragedy. In 1988, his daughter Nikki, 12, died in a skiing accident in New Jersey. He recalls that he was so caught up with his work that her death turned into an awakening.

Since then, he has been working to save lives and promote the conviction behind it: “Rich or poor, if your risk is high, you should see a doctor. A responsible doctor, for his part, keeps abreast of the latest therapy trends and abides by the
universal standards of care.”—CONTRIBUTED