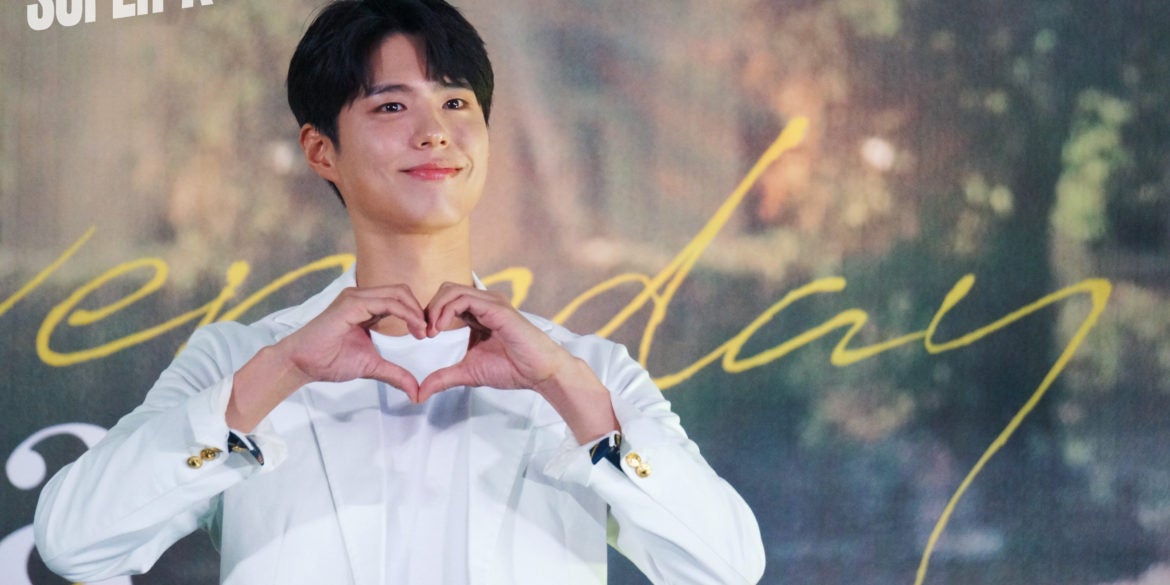 Park Bo-gum has been called the “Nation’s son-in-law” and for good reason. His politeness and diligence are known to everyone including fellow celebrities and the media. Fans dream they could present him to their families.

Even though it was not his fanmeet yet, the actor made sure to include his fans in the press conference. The event was held today, June 21 at Sofitel Philippine Plaza Manila.
He silently mouthed “gumawoya” when someone screamed “I love you” in Korean. When host Sam Oh asked what roles he still wants to play in the future he made sure to ask his fans.
“There are still many acting roles that I haven’t tried yet. I wanted to show my performance in many films,” he said. He then turns to his fans and asked. “Who do you want to see me as?”
The fans shouted doctor and high school student as he strained his ears to listen to their answers [he played the latter as Taek in “Reply 1988” (2015)]. He consulted his fans again when asked which one is his most remarkable role, yet.
“All those characters are so precious to me. So I will return the question to you. Who do you like the best?”
Some of the fans answered, “Hello, Monster” (2015) and “Love in the Moonlight (2016). He smiled in delight as he listened to them. He later added that every character he played has something similar to his personality.

One of the surprises that afternoon was the fact that the actor answered completely and clearly in the English language. It delighted the fans, including host Sam Oh who praised him and said, “your English is very good.”
Park Bo-gum is in the country for his fanmeet “May your every day be a good day”. It will be held at the Mall of Asia Arena tomorrow.He said that he is thankful for his fans who always take time to be with him. This is the first time he will meet his fans, but this is the third time he has been in the country.
“I’ve been here twice before. The first time was when I was acting for the drama ‘Wonderful Mama’ (2013). The second time was a real vacation after the drama ‘Love in the Moonlight’. The Philippines is where I did snorkeling for my very first time. That remains in my memory,” he said.

Popularity did not come easy for him. He revealed in an episode of “2 days and 1 night” that he wanted to become a singer and songwriter. He sent videos of himself singing and playing the piano to all agencies including SM Entertainment, JYP and YG. However, it was only Blossom Entertainment who took a chance on him. He has come a long way since then.
Two years ago, he topped Forbes magazine’s Korea Power Celebrity List. The “Bo-gum effect” was coined because of his effectiveness as an endorser.
He hosted “Music Bank” with Red Velvet’s Irene. He appeared in several variety shows and reality shows including “Hyori’s Homestay” Season 2. There is also an upcoming movie for him with Gong Yoo.
“The movie title is ‘Seo Bok’. I play a human clone who has the secret to eternal life. I am happy to be with amazing actors. Gong-yoo sunbaenim (senior), Jo Woo-jin sunbaenim. They are actors that I admire. This is going to be a very good movie,” he said.
His latest drama series “Encounter” will be aired in ABS-CBN soon. He plays opposite Superstar actress Song Hye-kyo. The drama tells a reverse Cinderella story. It revolves around an heiress falling in love with a younger, penniless man.

Fanmeets are often custom-tailored to deliver maximum fan service. Fans can expect the same for “May your every day be a Good Day Live in Manila”. They can look forward to the interactions and kilig moments with fans. Everyone will have a chance to have a hi-touch with the actor.
“It’s going to be a good day that we can all enjoy together. If you know the lyrics of songs, please sing and dance along with me,” Bo-gum said.
Based on his previous fanmeets, we know that he will cover Korean songs. In the past, he performed Day6’s “I like you” and IU’s “Through the Night”. He also danced to Twice’s and Seventeen’s Songs.
It is also expected that he will perform some of his own songs like “Bloomin” “My Person” or “Let’s go see the stars”. This year, his agency launched his official lightstick. The actor designed it himself. It features the initials “P” and “B” enclosed in a plastic globe. The globe has white wings and a cupid’s bow and arrow imprint.

James de Vera was a fan who brought a lighstick to the press conference. He bought it from Global Interpark.
“I love every part of the press conference, but my favorite part was when he entered the stage. It was the first time I saw him in person since I became a fan three years ago,” he said. De Vera admitted that he asked to be absent from work to attend the event but it was worth it.
Park Bo-gum ended the press conference by giving a message out to his fans.
“You guys, please enjoy the show. Let’s make sure that you enjoy and thank you very much for coming today and God Bless,” he said. And ever the polite man, he gestured that everyone to cheer for the host, Sam.
Park Bo-gum’s “May your every day be a Good Day Live in Manila” is produced by Ovation Productions and ABS-CBN Events in partnership with Blossom Entertainment and sponsored by TNT. Tickets are at P9,050 (patron), P7,980 (lower box A), and P5,860 (lower box B). It is available in SM Tickets.
Follow Super K on Facebook, Instagram and Twitter. With a report from Eds Garcia