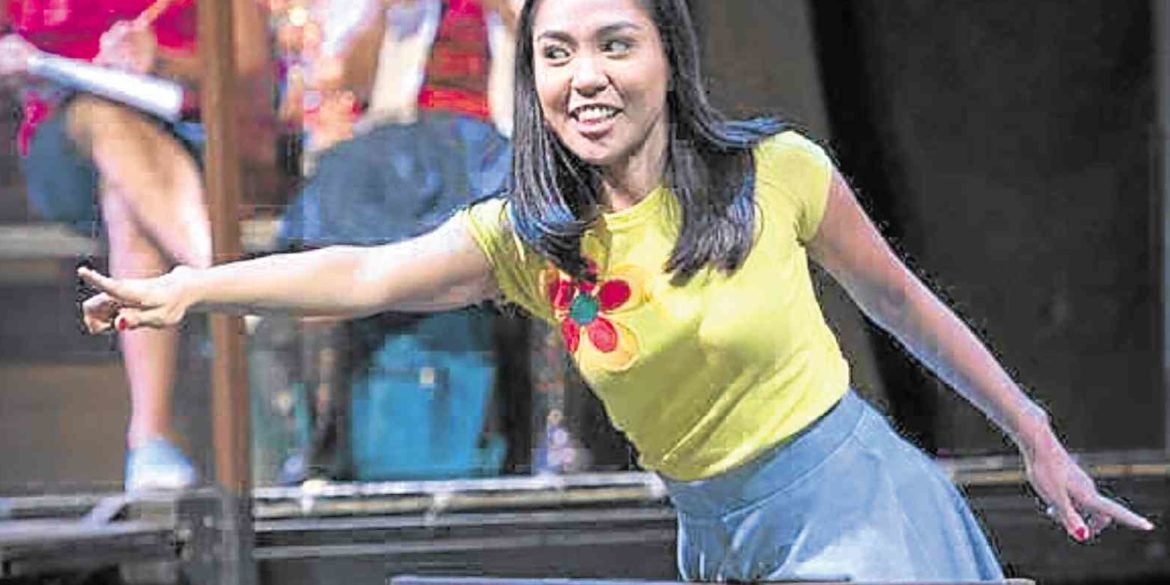 Aicelle Santos as Aileen in “Rak of Aegis” —VLADIMEIR GONZALES

Aicelle Santos: Back to flooded Venezia from war-torn Saigon

After touring Europe with ‘Miss Saigon,’ the Gawad Buhay-winning actress is set to reprise her role in Peta’s ‘Rak of Aegis’

From flooded Barangay Venezia to war-torn Saigon, and back.

Such has been the theatrical journey of Aicelle Santos, who has returned to the country after a yearlong stint in the 2017-2019 European touring production of “Miss Saigon,” where she played jaded bar girl Gigi.

Now she’s set to reprise the role she originated in Philippine Educational Theater Association’s (Peta) “Rak of Aegis”—
that of Aileen, who puts fictional Venezia on the world’s radar after a video of her belting out “Basang-basa sa Ulan” goes viral—for the jukebox musical’s sixth rerun, beginning July 5.

“When I got the news that ‘Rak’ was coming back, and Peta called, I immediately said yes,” Santos says. “My first musical was ‘Katy’ [Spotlight Artists Centre, 2013], and the reason I have ‘Rak’ is because the ‘Rak’ people saw me in ‘Katy.’ ‘Rak’ opened a lot of doors for me. It gave me a different level of confidence.”

Besides, Santos says, “‘Rak’ is family, especially offstage. Once you sit at Peta’s dining table, you won’t want to go home anymore.”

Before “Saigon,” “Rak’s” three-month run in 2016 was already the longest production Santos had been part of—and “that wasn’t even every day,” she says.

“So the ‘Miss Saigon’ tour was really good training. We did eight shows a week and only had one day-off per week. The challenge was how to keep the performance fresh. And you do that by researching again and again, by becoming more observant of the people around you. It’s more an actor’s work.”

More so with playing Aileen in “Rak,” which Santos has done since the show’s 2014 premiere. “I don’t know if I can still portray a 19-year-old after this season [but] I’m actually excited on how I will interpret the role now. After a tour, musicians say, you come back a different person. I understand that now in some way.”

Shortly after joining “Saigon,” Santos was diagnosed with chondromalacia—the thinning of the cartilage in the bones of the knees. “It’s because my physical activities in Europe were different. I was constantly walking, going up and down the stairs, plus the dance training. Here in the Philippines, we’re used to having cars. We’re not used to walking. Nagulat ’yung muscles ko.

“Apparently, it’s the common injury among ‘Saigoners.’ Since the cartilage is thin, the bones rub against each other. Whenever I moved, it was painful. I had to really rest and rehabilitate for one month. I had to be injected with steroids to numb the pain, so I could do strengthening exercises for the leg [the recommended treatment in the absence of cartilage damage]. Wala pala akong muscles sa legs!”

Injury aside, Santos says she actually enjoyed the touring life. “That was my first time away from home, living alone, outside my comfort zone. The best part was traveling. I saw places I never thought I’d see in my lifetime.”

The tour took her to cities across the United Kingdom, as well as Cologne, Germany, and Zurich, Switzerland.

“My most favorite was Zurich. That was my first experience with snow. Next is Bristol, because I liked the vibe, a mix of city and countryside. Also, Norwich, because that was when my fiancé, Mark [Zambrano, the sports journalist], visited me.

“I’m open to working on another international musical but now I want to be back home to get married and start a life with Mark. If the heavens open doors for me to work abroad again, at least I can take Mark.”

After “Rak,” Santos will reprise her Gawad Buhay-winning turn as the purported visionary Elsa in the rerun this September of The Sandbox Collective’s “Himala, Isang Musikal,” the musical adaptation of Ishmael Bernal’s classic film.

Having performed on both sides of the world, Santos concludes: “Foreign theatergoers are very disciplined. Everything has to be on time. When you say six o’clock, you have to be onstage at six—everyone moving and warming up. If not, you’re late. No one’s ever late there. They’re very systematic with rehearsal, room assignments, costumes, mics. Kaya naman natin sa Pilipinas e.

“But in terms of talent, we’re on par. In terms of material, we’re also on par. We have good writers, good musicians and, I think, the best actors.

“[The English] kasi, most of them come from drama and theater schools. That, we don’t have. ’Yung training natin, sabak kaagad tayo sa show. So I noticed Filipinos are driven by passion. Whenever they’re onstage, ramdam na ramdam mo. It’s always 100 percent.

“I’m not saying foreigners are not passionate. They have heart, but we have more heart. Put a foreigner side by side with a Filipino, lakas ng impact ng Pinoy.” —CONTRIBUTED