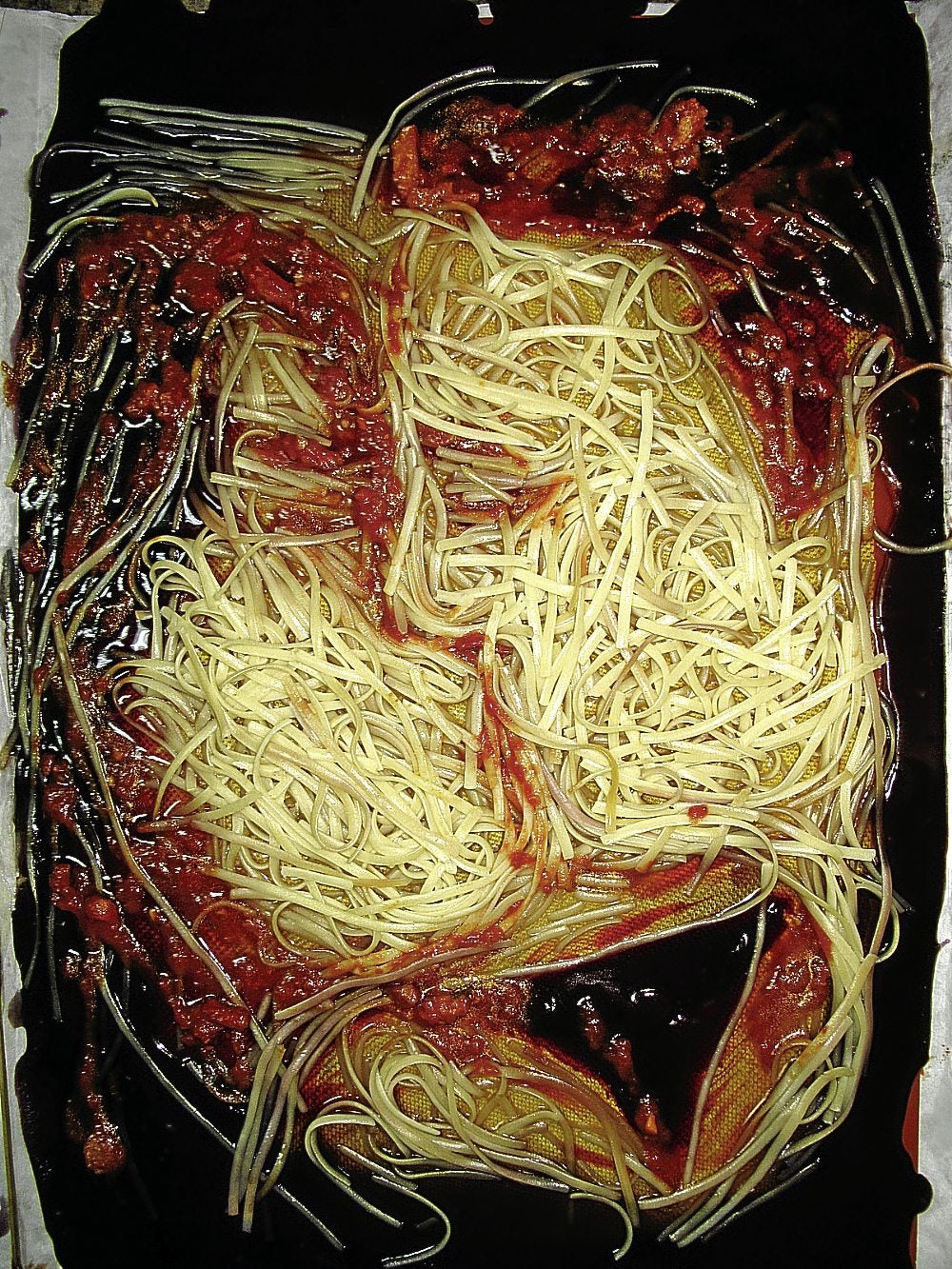 Niccolo José of Studio 10.10 is an artist adept in all sorts of media; he draws, sculpts, molds, designs and makes furniture with the use of just about everything he could lay his hands on. He combines his innate skill as a craftsman with his Environmental Science degree from the Lewis and Clark College in Portland, Oregon.

“The harder, the more challenging the medium, the more I love it,” he says. “I like the fact that you cannot erase it; that if you make a mistake, you must start all over again.”

To add to his long list of art materials are twigs and branches from coffee or fruit-bearing trees. He gathers, bends, twists and turns them, to form larger-than-life sculptures, three of which are now on display at Washington Square Park, Oregon. He also uses the blow-torch (yes, the one for crème brûlée) for pyrography on plywood; and sampalok and mabolo wood for furniture.

Recently, he added sugar and pasta to the list, after I challenged him to come up with a Valentine’s piece, made from anything edible.

Nico should be one of those on the Live Curious ads of National Geographic. His curiosity is infectious!

He takes a close look at everything he touches and then asks himself questions: If I melt chocolate, what will happen? Can I mold it right after melting or must I add something? What about sugar, do I just melt this, then can I mold it? What about pasta?

He just got a piece of parchment paper and started to draw. Before I knew it there was an image.

Then he asked how to make lollipop. He wanted to use hard candy as his base.

So in a pan I combined 1½ cups sugar or colored sugar (for the piece he used red color, clear and purple) ½ cup light corn syrup and ¼ cup water. It was cooked at 300Fº.

Then a half-teaspoon of oil-based flavoring is added to the mixture—in this case raspberry, strawberry or rose in keeping with the Valentine’s theme. (If using the recipe to make lollipops or candies, pour into molds, let set and it’s ready to eat.)

Nico then laid a silicone mat over the image on parchment paper and outlined it with bavette pasta.

When the candy was ready, José poured it and kept doing so until he was satisfied.

In the end he consumed three recipes of red and four recipes of clear, plus four more of grape candy for the border to frame his work.

He then dumped the plate of pasta then started to move it around. He finished his work by bordering it with the remaining pasta sauce.

Ludy, one of the girls who had been observing his work said, “Ay, tao pala, akala ko kalat lang!”

In less than two hours José had a work of art.

Impressive, indeed, for someone who had no idea what to make when he started.

The candy, which was the base of his work, melted after we took pictures of it. But Nico’s talent is admirable.

Want your portrait made with a crème brûlée torch, building, renovating? Call to set an appointment—0917-5573109. His dining tables, chairs and furniture are beautiful.

Here are the pasta recipes that were consumed by Nico. Try making them at home, they’re delicious. If there are leftovers, then make your own artwork, too.

(This José ate before he started his piece, he set some aside to use for his artwork.)

Add herbs if you have any, 1 tsp mixed Italian herbs or 6 large basil leaves, julienne.

Simmer sauce over low heat, mixing occasionally until sauce has reduced to half and thickened.

Season with salt and pepper.

Cook 250 g of pasta and toss onto sauce.

Serve with a lot of freshly grated Parmigiano cheese and freshly snipped basil.

(This pasta José ate after he finished his artwork. Bacon, by the way, is his favorite.)

Cook 150 g of Bavette (I use Barilla), drain and immediately add to pan with the sauce, toss to coat.

Season to taste with salt and pepper. Add more cream or thin with stock, as you wish.

Finish with a mound of crushed nori, or I like using the Korean sesame-flavored nori flakes that I eat as chips from Little Store in San Juan (7219174).

My book “Kitchen Rescue 3, The Directory – My Lifeline to Eating, Cooking and Living” is now available at all leading bookstores. Call 6474744.