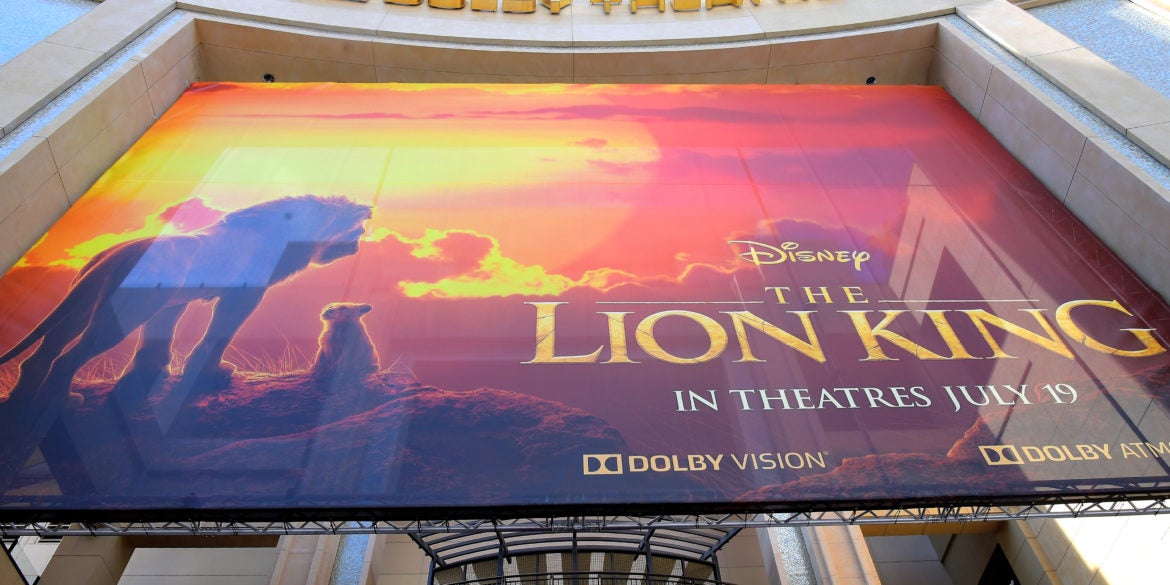 HOLLYWOOD, CALIFORNIA - JULY 09: Signage is seen during the World Premiere of Disney's "THE LION KING" at the Dolby Theatre on July 09, 2019 in Hollywood, California. Alberto E. Rodriguez/Getty Images for Disney/AFP

Disney’s new 3D “Lion King” was inspired by the majestic scope of David Attenborough’s natural world documentaries — although the talking animals did cause some problem, its creators have revealed.

The film tells the classic tale of young lion cub Simba seeking to avenge his father Mufasa’s death and save his kingdom, rendered in photo-realistic visuals using cutting-edge effects.

From the very opening scene, the remake — which emulates the 1994 original’s “Circle of Life” theme — treats viewers to breathtaking “shots” of antelopes, zebras and wildebeest galloping across the African savannah.

Its producers took safari tours of real-life locations from Kenya’s huge Masai Mara reserve to the desert sand dunes of Namibia for inspiration, before artists and technicians sketched and modeled details for the final film.

The movie also featured the musical talents of celebrated German composer Hans Zimmer, who provided the soundtrack for the Attenborough series “Planet Earth II” produced by the BBC.

Attenborough, a veteran British environmentalist, has narrated dozens of wildlife documentaries over six decades, opening the eyes of millions of television viewers around the globe to the wonders of the natural world.

It was important the film have “the illusion of it being a naturalistic documentary,” director Jon Favreau told journalists in Beverly Hills this week.

“We looked at a lot of the work that Hans had done like Planet Earth II, all of those Attenborough BBC documentaries, and how much emotion can be expressed without human performance, just through music and editorial and storytelling,” said Favreau.

Unlike the original cartoon version, the animals’ faces in the new “Lion King” are largely realistic and not human-looking.

This meant the animators had to rely on using actual facial expressions and movements observed in the real-life species, and find creative ways to match these to the dialogue recorded by voice actors.

“We would shoot video on long lenses (of the voice actors) just to have reference of what they were doing on their faces and we would give that to the animators,” explained Favreau.

“And the animators would take the choices that they made and interpolate it into what a lion would do, or a hyena would do.”

He added: “So it really fell on the animators’ hands to try to figure out how to express their performances through the language of an animal’s emotive language.”

Working on Attenborough’s documentaries provided another, serious lesson for Zimmer, one of Hollywood’s most sought-after composers who won an Oscar for his work on the original “Lion King.”

Concern over humanity’s detrimental impact on the natural environment and its species has only grown since work began on the first film, he said.

“We started in ’92 or something like that. And what was so pertinent and important then has become somehow more urgent and more important,” he said.

“David Attenborough has shown us where nature is going.”