Cinderella in my soup, other ballet masterpieces on my plate | Inquirer Lifestyle 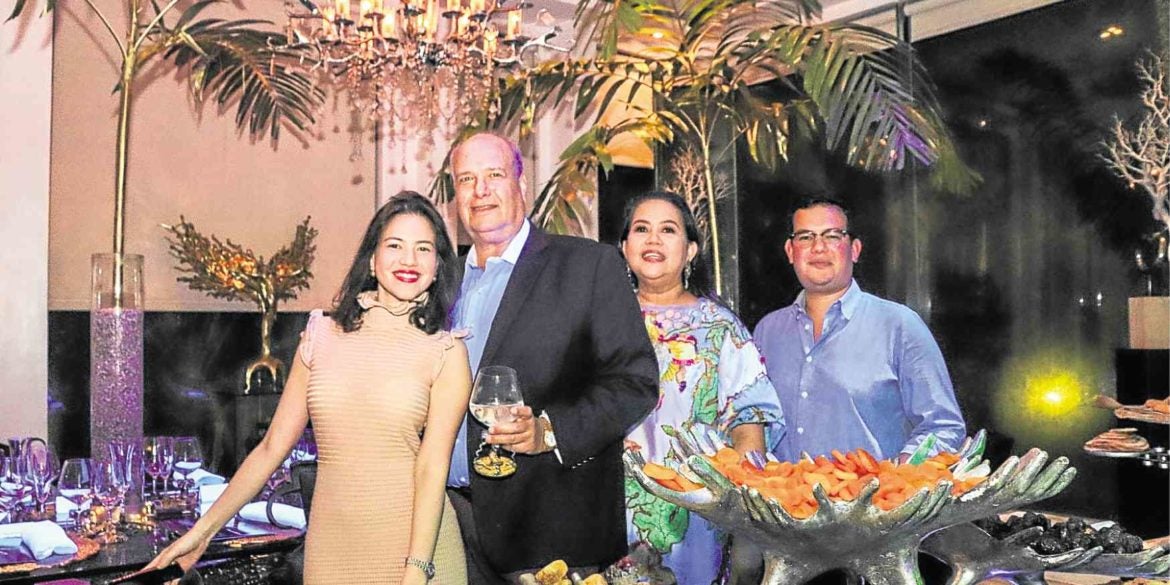 Cinderella in my soup, other ballet masterpieces on my plate

At the dinner to announce the 50th season of Ballet Philippines, gastronomy told the story of swans with foie ice cream crunch plumes, salads of fairy queen’s crowns, and a she-wolf’s bitter and sweet feelings in fruit jellies, in a masterful choreography of flavors and presentations

It was sorcery of the palatable kind that announced the 50th season of Ballet Philippines.

Kathleen Liechtenstein, president of the country’s premier ballet company, hosted a dinner in her home that served up each of the forthcoming productions in six courses of visual and gustatory plating.

Ballet Philippines (BP) marks half a century this year with the staging of beloved classical and original choreographies.

The first resident company of the Cultural Center of the Philippines, BP was formed in 1969 by National Artist for Dance Alice Reyes. Some of her choreographies will be among the shows performed by the dance company, and acknowledged as a cornerstone of contemporary Filipino identity.

Liechtenstein told the stories of enchanted princesses and lovers from Indian legends in the language she is most proficient in: food.

Tall candelabras lined the pathway leading from the street entrance into the front door. It opened to live harp music and palm trees as centerpieces of the three long tables that stretched across the living room-turned-dining space.

As guests arrived, they were imprinted with 24k gold leaf on their faces, arms, backs or décolletage. Comparisons of the gold markings were made over cocktails, held in a separate room amid the kinetic art of Gabriel Barredo.

Cheeses hand-carried from Europe, nuts and dates of Middle Eastern provenance, cured meats from Italy and Spain were spread on a cocktail table that both enticed and overwhelmed.

When all were seated in the main section, Liechtenstein introduced a short video presentation, followed by the opening salvo of a “Swan Lake” amuse-bouche—fondant swans floating on a blue lake. Rougie Foie Gras on a popsicle stick was inserted by the feathered plume as the edible bite with filberts, marconia almonds and mosto cotto. It took a while for everyone to finish snapping photos before finally tasting the Foie Ice Cream Crunch.

The second course was introduced with an image from “A Midsummer Night’s Dream” and a brief on the salad called Titania Crown, after the fairy queen in Shakespeare’s comedy. A circlet of micro tatsoi, kale, mizuna, roses, sage, pansies, figs, berries and kumquat were enlivened with sesame oil and ginger with presumably Puck’s half face peeping from the side of the plate. Felix Mendelssohn’s music played as the woodland royal’s coronet was vanquished, though delicately and with pleasure.

This overture gave way to Tchaikovsky’s “Cinderella,” which Francisco Feliciano specially arranged for ballet choreographed by Reyes. This special show in December will be set against the backdrop created by Salvador Bernal. The fairytale magic transformed a pumpkin into a coach and that evening, became a soup, the Kabocha Potage.

Liechtenstein was a proud mother who called on her daughter to render a musical number. Soprano, scientist and doctor of medicine Lauren obliged with the Disney song, “Someday My Prince Will Come,” accompanied by the harpist. The audience called for an encore, which she gamely agreed to with a ditty on dreams that are wishes in classical voice rendition.

Entr’acte (interval between two acts) was a taste of bitter and sweet, tangy and tart to capture the feelings of the black she-wolf in “Itim Asu.” It was a palate cleanser of passion fruit, raspberry, apple, orange and lemon in jellies suspended from a black tree.

Rama and Sita as entrées

The tour de force was a main course introducing “Rama Hari,” with a choice of either Rama or Sita, both in imaginative presentations of the epic story to be staged in March 2020. It will bring the works of four National Artists together for a spectacular culmination of the season—the libretto of Bienvenido Lumbera, Bernal’s production design, Ryan Cayabyab’s music, and the choreography of Reyes.

Rama, as an entrée, was a generous cut of seared wagyu A5-9 in burnt guava syrup with basmati and vegetable crunch on the side. Panpuri was added for a pronounced Asian sensibility.

Sita was a portion of Chilean sea bass in calamansi curd with crablets, diver scallop, basmati and vegetable crunch. The fish and sides, arranged in a cornucopia, were served in a transparent plate over a low dish with live gold fish. Only the taste of the fish and the meat outdid the remarkable presentation.

Before the evening ended, excerpts of the season’s performances gave a preview of what was to come. Scholars of Ballet Philippines’ programs did pas de deux that confirmed the talent of Filipino classical dancers.

All six presentations for the 50th season were served as a tableaux for dessert. Odile was an amedei Ecuador cru mousse mounted on a miniature oriental shelf with Oberon’s fudges of wild thyme and nodding violet. Fairies in spring, summer, fall and winter were jellies of sauterne, merlot, cabernet, sauvignon. The she-wolf was a black macaron and monkeys were durian mango balls.

Guests concurred that the evening deserved a standing ovation—with much to look forward to in Ballet Philippines’ 50th season. —CONTRIBUTED