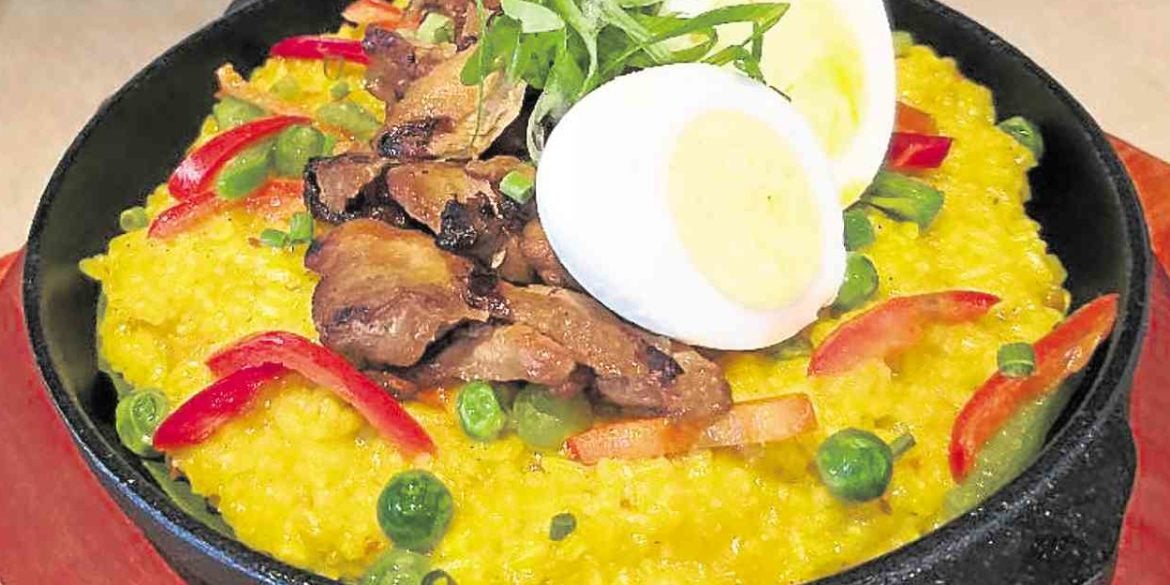 Out of the ashes—or, more accurately, lahar—has risen an oasis of sorts in Porac, Pampanga, which had been desolate after the eruption of Mt. Pinatubo in 1991.

The oasis is the Alviera Country Club, an Ayala development with Leonio Land. Soon to be launched, it has complete amenities of a country club —function rooms, swimming pools, gym, spa, sports facilities, restaurants.

We left Metro Manila early to avoid the traffic, and had breakfast at Alviera’s Café Sabyan. While the buffet was being set up, we checked out the jars of cookies, made in-house—crinkles, chocolate chip and biscotti. Dunked in aromatic coffee with beans sourced from Sagada in the Cordilleras and Sultan Kudarat in Mindanao, the biscotti was welcome, indeed.

The warm breads came with good quality butter and jams such as the banana-langka spread and calamansi marmalade.

All the food outlets at Alviera bear Pampango names. Sabyan means to tell or say, almost the same as the Tagalog sabihan.

Galo (movement) is the sports bar where snacks, drinks and spirits are available.

Another dining place is Manyaman or delicious.

Pampango food, of course, is  on the Manyaman menu.

The club’s executive chef, Rafael Borromeo Hubilla, presented the Pampango dishes of the day. There was pako (fern) salad made heftier with shrimps and singkamas strips with a light vinaigrette dressing.

The expected bringhe was there, the local version of the Southeast Asian festive rice, tinted yellow with turmeric. But it was topped with unexpected chicken inasal, combining two regional cuisines—Pampango and Ilonggo.

Bulanglang, soup lightly soured with guava, had bits of pork with the usual vegetables. And our prayers were answered. There was tibok-tibok, pudding made of ground sticky rice and carabao milk topped with coconut milk curd (latik).

But Hubilla, a 25-year veteran of hotels and country clubs, knows that guests would want a mix of cuisines, which he presented that day.

The seared tuna loin was a mod Japanese sashimi wiped with wasabi cream, with a sprinkling of sesame seeds, a garnish of ripe mango and pickled radish and a balsamic reduction sauce on the side.

The green salad was placed in a baked parmesan basket. Chicken wings were marinated in milk and butter, and then fried crisp.

Hubilla proudly announced that the kare-kare peanut sauce was made from scratch—including the bagoong (shrimp paste) that he was advised by his guests to bottle and sell because it was very good.

After all those, there was still blackened salmon steak and barbecued baby back ribs. Dessert was Alviera’s signature chocolate cake.

Swimming should have been  next after lunch, especially since the water was inviting, but the group chose to sleep off the calories with a massage in the spa. By  merienda time, there was still the feeling of fullness.

We were back at Café Sabyan where the buffet held so much food again. Hubilla pointed out the Angus burger in green buns. He predicted it would be a favorite of children because of the color—they don’t need to know the green came from the peas he used to make the buns.

And, of course, the spaghetti with meatballs and Hawaiian pizza would be popular as well. Burgers in a “normal” colored bun were also available.

Pancit Canton by itself, or sandwiched in a bun the way some of us prefer, was there, too. The blueberry cheesecake reminded many how well we make our pastries.

The sun was setting behind the mountains west of Porac when we left. Those mountains are green again—providing the beautiful view from the second-floor function rooms.

Alviera looked like a great wedding venue but lacked the hotel rooms or villas where  guests could dress, enjoy the facilities and have more more bonding time.

A 50-room hotel has been proposed, said the Alviera team. What is certain is that there will soon be a community—homes, schools, a public transportation depot (now under construction), industries and businesses.