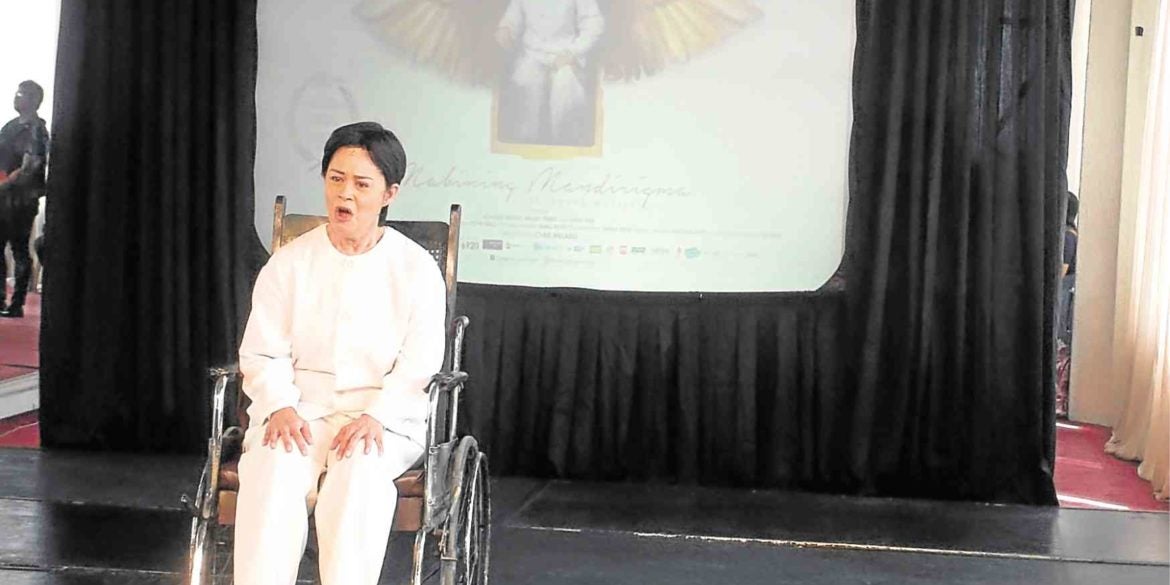 Tanghalang Pilipino (TP) is restaging “Mabining Mandirigma,” and the “brains of the revolution” will be played by celebrated actress-singer Monique Wilson.

Wilson is better known for her work in English-language productions of Repertory Philippines and in “Miss Saigon” in London.

This was announced in a recent press conference at the Cultural Center of the Philippines (CCP).

Sparkling excerpts from the play were provided by Wilson, clad in white and on a wheelchair, singing a lengthy soliloquy, and the rest of the cast led by theater heartthrobs Arman Ferrer and David Ezra, who alternate as Emilio Aguinaldo. Musical director is Ejay Yatco.

Women’s rights activist Wilson recalled that she played Maria Clara in another TP musical 25 years ago. An activist for women’s rights and social justice, she said, “This role has really been my dream; this musical really inspires me. It’s so different from Broadway. Artists can contribute a lot to society, we can use activism… Like my work as an activist with Gabriela, it gives me inspiration, challenges. I have been preparing for this (role) for a long time now.”

She added, “In these perilous times, with provocative political threats, we need musicals like this. Theater is the last bastion [for change]. While being entertaining, it awakens, it inspires one to action, and opens the eyes of our people.”

Millado said Wilson was the original choice for the role of Mabini, but she was working abroad at the time. As for the transformation of the Sublime Paralytic into a feisty woman, he said that “it is an Asian tradition—in Indonesia, for example—for all noble heroes to be played by women.”

And, in this case, not just Mabini—even the macho US generals are transformed into cloying ladies. And the novelist Mark Twain is a drag queen! (It’s worth noting that Twain defended the Philippines from Republican imperialists.) —CONTRIBUTED