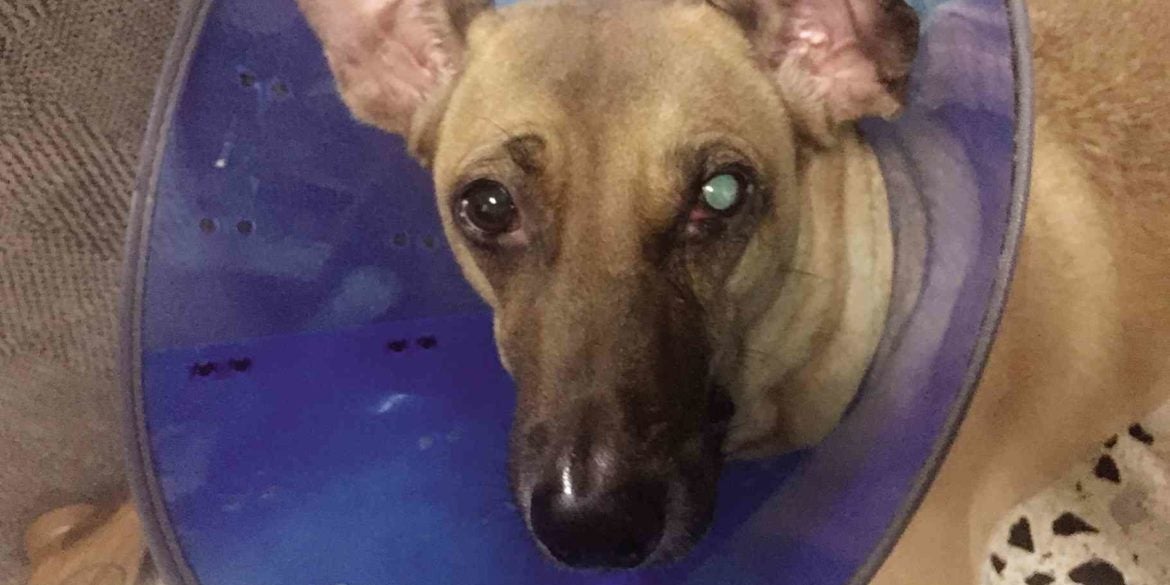 Kikay wears a “cone of shame” because of an eye infection.

When your dog becomes a senior—and it begins to show

Because the spring is gone from their step, they will need extra patience and care, so be ready

An ad that often pops up in my Facebook feed reads, “When your dog is seven years old, he’s considered a senior.” That means Kikay, my 10-year-old rescued asPin (asong Pinoy), and my first dog in two generations who has hit two digits in age, has been a senior for three years.

I’ve only noticed it in the last couple of years, however, especially since, as I’ve learned, it’s true that asPins are sturdier, and really do have fewer health issues than purebreds. It’s most evident in the white hair growing around her snout, the thin film that has appeared over her eyes (a sign of cataracts), and how she’s more out of breath after our walks.

She still jumps on my bed or my mom’s La-Z-Boy, her favorite spot, but it’s no longer a clean leap. Sometimes her hind legs get caught, and such an exertion is no longer good for her bones, so I intentionally leave stuff on the chair so she opts to plop on her bed on the floor instead.

I’ve seen how such a jump, or constantly negotiating stairs, can leave her with a slight limp. I massage her muscles with lavender oil and double the dosage of her joint supplement, which she has been on for a couple of years. A hot compress also helps; she’s back to her old gait in a few days. Still, she’s slowed down considerably.

I only wish I had gotten her a baby brother sooner. Her younger sibling Kiko came into our lives when Kikay was seven. They still play a lot—and although poor Kiko always gets the blame, his ate certainly initiates horseplay quite often. Still, there’s a more evident energy mismatch nowadays; Kikay can’t keep up with the little boy’s dashing about, and gets irritable when he’s too hyperactive. Twice already, because Kikay’s eyes bulge out, she has ended up with a scratch in her eye because of this roughhousing, and has had to wear a cone and get eyedrops. Kiko, meanwhile, ends up with more energy to expend.

Although Kikay needs her walks, I sometimes take the younger dog for an extra round. But we can’t cut down on Kikay’s exercise for another
reason that comes with age: Her metabolism has slowed down considerably. She’s already eating less than Kiko, and we’ve cut back on the snacks, but she remains overweight. It breaks my heart when she cleans her bowl and looks at me, as if to ask, “That’s IT?” But it’s tough love. Also, we’re giving her more fruits and vegetables.

With seniorhood comes a slew of problems, other than aching joints and bad eyes. Their stomachs are more sensitive, their fur less shiny, their teeth no longer as white or strong. They are more sensitive to temperature changes—our punishing Philippine summer heat can kill a senior dog—and adapt less easily to changes in routine and habit. Kikay got a prophylaxis a couple of years back, and I discovered during a prerequisite blood test that some of her numbers were off because we had tried this more commercial dog food that I had gotten for free. We had to go back to the better (and more expensive) brand.

I am hoping that my old girl will not develop any major health issues, but I’m ready. This is the time when she will need me most, and like most committed furmamas, I have promised to take care of her and all her needs for the rest of her life. Like many owners of older dogs, I have accepted that one day, sooner than later, she will leave Kiko and me. I only pray that she will go with no pain—and yes, without putting me in the unbearable position of having to help her on, but it’s a possibility I won’t shirk from.

It is criminal that in many places, especially in the west, senior dogs are surrendered to shelters because they are harder and more expensive to care for. Every dog gives us the best years of his or her life, even life itself; I’m still teary eyed today reading about Miley, the dachshund from Kidapawan who recently gave her life to protect her master’s baby from a cobra. It will take a special kind of monster to abandon a dog at the animal’s weakest and most vulnerable.

Kikay is still healthy and alert, but I don’t know how many more years I will have with this extraordinary dog, who has convinced me to choose no other breed for the rest of my dog-
loving days. A senior dog needs a more attentive, caring, discerning owner—and one who knows that it could only get more challenging from here on.

Then again, after everything she has given me, Kikay deserves no less.