All-natural and low-sugar: Kombucha takes the US by storm | Inquirer Lifestyle ❮ ❯ 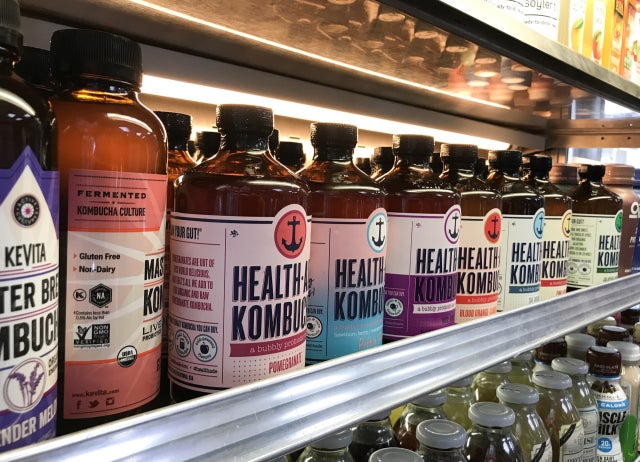 Bottles of commercial Kombucha are seen displayed on a Deli store on Manhattan borough of New York City, on August 2, 2019. (Photo by Kena Betancur / AFP)

All-natural and low-sugar: Kombucha takes the US by storm

The recent U.S. kombucha craze has been fermenting for decades.

U.S. sales of the cloudy, bubbly beverage reached $412 million in 2018 according to Nielsen data, up 42 percent from the year before.

The now-ubiquitous fermented drink, whose exact origins are unknown, is even stocked by the American retail giant Walmart. Across the United States, it’s not uncommon to find shops offering up to 10 different brands.

For Alex Ingalls, who founded Pilot Kombucha in 2015, the buzzing popularity of the slightly alcoholic drink (the kind sold in stores only has 0.5 percent alcohol content) is due to “a mix of things.”

A “hardcore base” that has drunk kombucha for years was likely drawn to its supposed health benefits, particularly for the digestive system, she said, though there has been no clinical study on the matter.

The claim is based on the fermentation process used to make kombucha, which contains probiotics: live micro-organisms that can help the growth of intestinal bacteria.

However, Ingalls mainly sees the kombucha wave as the result of its major advantage over sodas and even juice: low sugar levels.

“These days, everyone is very conscious about sugar intake,” she said.

“They’re trying to drink less soda and even less diet soda,” whose ingredients have raised eyebrows over the years.

“Since I don’t drink so much soda, when I settle on something flavor-y… I think kombucha is a pretty good alternative,” said Renata Ontman, after a class on kombucha-making at the Brooklyn Brainery recreation center.

The course was taught by Cheryl Paswater, founder of the kombucha company Contraband Ferments.

“I always try to eat as healthy as I can, and I think (of it) as a sort of snack in the afternoon,” said Sarah Gilberg, who also attended the class, adding that the fizzy beverage makes her feel “energized.”

Four years after founding her company, Ingalls produces about 97,200 gallons (368,000 liters) of kombucha per year, which she sells at 400 different locations throughout the area.

Hers was one of the first New York-area brands, and she will soon open her first office in Red Hook, Brooklyn, anticipating that her production levels will triple.

Pilot Kombucha not only has competition from kombucha giants such as GT’S, an established probiotic drink-maker, but also from PepsiCo, which bought kombucha brand KeVita in 2016, and Coca-Cola, which recently invested in kombucha maker Health-Ade.

“I think there’s enough room for everybody” in the market, said Ingalls, a former chef.

In her opinion, kombucha is going to be like craft beer—which also took bars and supermarkets by storm—”where everybody has different variations and riffs on certain styles.”

The homebrewing process for kombucha is much simpler than that for beer, though, and the rapid growth in sales has been matched by a proliferation of amateur fermenters across the United States.

“I don’t want to spend money on it,” said Gilberg, who took the kombucha class, noting that bottles cost $3-$4 apiece. Rather than continue to buy kombucha twice a week, she wanted to learn how to make her own.

“We do a lot of community workshops… classes at libraries, kids classes,” said Paswater.

Paswater, who has been fermenting her own kombucha for more than a decade, does not necessarily see a big difference between homemade and mass-produced kombucha.

“There are some things that are kombucha-like that are coming on the market that I question a little bit as far as ingredients or even some of the marketing… but there’s also a lot of amazing kombucha out there,” she said. NVG

How to Make Homemade Kombucha

Growing my own koji