Glazed with soy sauce (not Coke) and eaten with ‘pusô’: Why Cebuanos claim their ‘lechon’ is best | Lifestyle.INQ ❮ ❯ 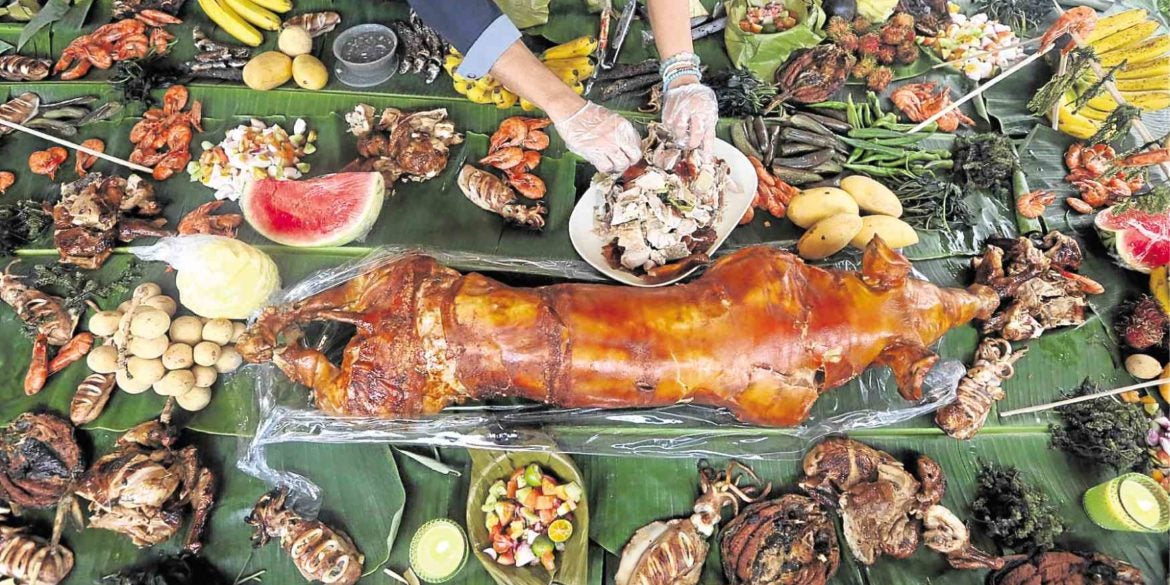 Glazed with soy sauce (not Coke) and eaten with ‘pusô’: Why Cebuanos claim their ‘lechon’ is best

To signal the opening last week of the Lechon Festival at the Mactan Midtown in Lapu-Lapu City, Cebu, there was no ribbon-cutting— just slices of crunchy lechon skin distributed to officials of the city and the president of Megaworld Cebu Properties.

Then a boodle fight started. Amid the spectacle of dancing and singing, guests dug into the food laid out on a table lined with banana leaves. Of course, there was a huge lechon.

The skin was the first thing the guests peeled off from the spit-roasted pig, and then the white meat, the best parts near the belly. These were eaten with rice wrapped in coconut leaf, the pusô.

It is not only the pusô which defines the Cebuano way of eating. It is also the flavor of the lechon itself. It is salty, much more than the lechon of other provinces.

Cebuanos will tell you that their lechon has flavor within, not relying on the liver sauce that people up north need to dip in the roasted pig slices. Cebuanos, like all Visayans, will  use only vinegar with chili to give it not only the extra oomph but also to balance the cloying (umay) taste of rich, fatty food like lechon.

Watching the lechon being cooked in open pits made us wonder how lechoneros can work in a place stewing in heat for hours.

A newly shaved, 10-kg pig ready for roasting was brought in from Paray’s of Mactan. The lechonero regulated the heat by spreading the embers to the sides. The lechon will be burnt if the embers are concentrated in the middle, he said.

Once in a while, the embers are sprayed with oil to keep the heat going. The skin will turn burnished brown by adding soy sauce to a mixture, he said.

The lechonero smiled when I said lechoneros up north rub Coke instead. Well, different strokes for different folks where lechon is concerned.

At the pit, and on a jeepney with a big papier-mâché lechon, organizers of the IronMan triathlon gamely posed for photographers. We were told that the athletes would have their own boodle fight after their event. Great and delicious way to gain back all those calories and energy expended during their swimming, running and cycling events.

Lechon is a big industry in all of Cebu. People who participated in the Mactan Lechon Festival were only some of the brands in Lapu-Lapu City itself, in Cebu City, and in Carcar. But they were plenty enough for guests to sample.

Lapu-Lapu City tourism officer Ed Mendez said local lechoneros have a daily output of 6-10 heads, but on special occasions, like Christmas and fiestas, it can go up to 20-40 heads.

The count is more than that, two lechon business owners claimed. Ryan Paray of Paray’s Lechon said that orders go from 70 to 100 weekly. This was confirmed by Amy Salamana of Pelyn’s Lechon Haus, who said that during Christmas season, it’s about 1,000 heads.

Paray and Salamana took over the lechon business of their respective fathers. Paray was based in England with his wife when he decided to come home for good 15 years ago to learn the business.

Salamana’s father was a pork trader in Mandaue City who became a lechonero, then moved Pelyn’s to Lapu-Lapu City in 2003.

Negros Occidental is the main source of their pigs, with a few coming from Cebu’s Bantayan Island. The hog breed is a mix of native and imported—the latter has less fat, its skin doesn’t soften or crack.

Paray and Salamana said business has picked up due to social media, with some orders coming from outside Cebu.

But the proof of success is in the taste. The Cebuanos in our group preferred Paray’s saltier lechon. But the guests from Manila liked Pelyn’s.

But all agreed both didn’t need any sauce—the meat was lip-smacking good enough.