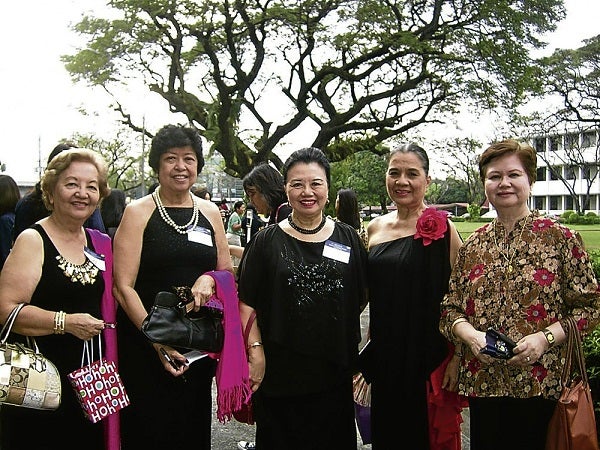 “You didn’t go to the homecoming,” said this mockingly accusatory voice from the past. It was Linda Panlilio. We both went to St. Theresa’s, in fact to both campuses, and we both missed the Quezon City (not the Manila) alumnae homecoming on Jan. 28 for the same perfectly good reason: the ninth day of prayers for Tony Manahan.

Tony and Linda’s own late husband, Bec, both doctors, had been colleagues at the Makati Medical Center, and she and Tony’s widow, Nening, both belong in the Oriental Ceramics Club, old friends.

For my family, on the other hand, Tony and Nening have been very special people. Nening and I go back a long way, having met at Colegio Mayor de Padre Poveda in Madrid in the mid-’50s, and have remained close, a closeness that has extended to my children. If not for Tony’s memorial, I’d have gone to the homecoming.

Indeed, I’ve always tried to make a special effort to join old classmates for get-togethers—for birthdays and other anniversaries and welcome parties for balikbayans, for instance. Speaking of special efforts, I joined the alumnae trip to Las Vegas, Nevada, in 2006, the year after our golden jubilee. This year, although not a special year for our class, we had planned, as has become a tradition with us, to attend the homecoming.

With such tradition among us happy joiners of Class ’55 not exactly unknown to other alumnae, the organizers of this year’s homecoming asked us to join the decimated jubilee classes of ’52 (Diamond) and ’57 (Emerald) in a dance number. We were the Emerald girls of 2010 ourselves, and, therefore, were not celebrating our next jubilee—marked every five years from the 50th—until 2015. But three years was simply too long to be waiting to be asked to dance again.

Fanny Chua Tee Lu, our class representative for life, knew exactly the dancing queens to call and got from everyone a quick, enthusiastic answer, “I thought you’d never ask.”

The best part was our eagerness would even come under the cover of a noble cause: We are lending not only six pairs of dancing feet but also morale support to Gilda Sebastian, who for some reason, natural causes included, ended up as the lone presence among the 17 first high school graduates of Quezon City, for the Diamond Jubilee Class of ’52; and the two holdouts of the Emerald Class of ’57, Gilda’s sister Lila Sebastian and Lila’s balikbayan classmate Nery Mangosing.

When the organizers saw what precious mix of gems they had found—a diamond, two emeralds and six golden girls—they also found a quick stage name for them: Precious Jewels.

It was, however, rather too late into the month for preparations. I myself couldn’t make it to the first rehearsal, and, coming from the second one the next day, Jan. 20, I got the phone call that would force me to change my plans: Tony had just passed away.

January, in fact, held for me sad or worrisome surprises. My four-year-old granddaughter, Mona, had to go into surgery for hernia on Jan. 12. And having just gone through the long hospital admission process, I got a text from my daughter, Gia: She was herself in the Emergency Room of the same hospital for dehydration. Her husband having just returned from a working trip that night and going off again the next morning, I decided to stay with her. She was checked in five floors below Mona, who had her own father with her.

I missed the lunch for a balikbayan classmate; it coincided with Mona’s post-surgery checkup. I thought the worst was over after that and happily decided to join in the dance. It promised to be a welcome change of pace for me.

I wasn’t disappointed. The rehearsals were fun in themselves. After a quick assessment of the practical possibilities of the Precious Jewels, our instructor, Guineveve Sacdalan, a St. Theresa’s P.E. teacher, decided on a paso doble number, more a march than a dance, simple but dramatic, done to the bullfight music of España Cañi.

Perfect, indeed! Not only could we still walk unaided, we certainly could assume the appropriate attitude. There were some legitimate concerns: the attitude would not look as flattering on our mature faces as a smile. But attitude won. Smiles, after all, have absolutely no place when feeling Flamenco in long fluid gowns and high heels and with noses in the air; flying scarves were to provide the illusion of flashy movements and lively pace.

But as Tony Manahan would have it, I had to back out. But again, my withdrawal left the troupe in exact pairs.

Still, all wound up for the dance, I did feel a bit disappointed. But as kind fate would have it, this dancing queen got her makeup chance when, in curtain-call numbers at gala night at the Cultural Center, the “Mamma Mia” ensemble indulged us, its primed audience, to sing and dance along.