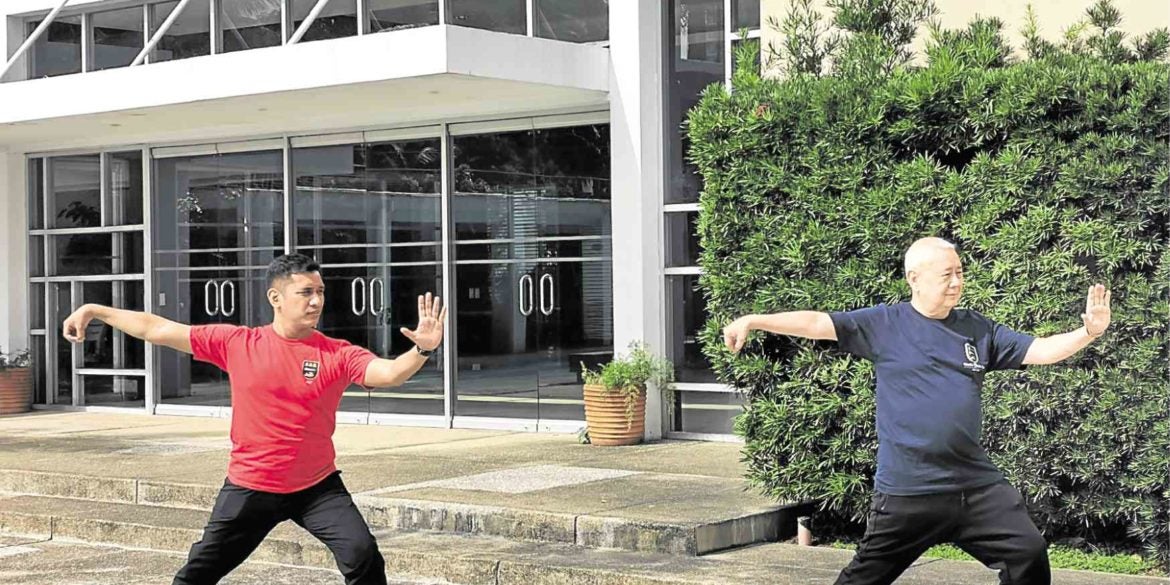 Joseph (right) is now a student of tai chi.

Businessman and civic leader looks at the nonstop battle—‘Be patient; be prayerful. You have nothing to lose’

“You cannot be bitter. You have to take out all the pain in you for healing to come in. Don’t complain. Manage your emotions,” he told Inquirer Lifestyle. “Do not allow negative feelings to affect you.”

Now 70, Joseph has been battling Stage 4 cancer for nearly 20 years, the longest living person with Stage 4 cancer, according to his doctors in the United States: “You should not be here anymore.”

In 2002, Joseph was diagnosed with Stage 4 kidney cancer. His left kidney had to be removed when a 9.5-cm tumor was discovered. Doctors informed him that if he lived through 2007, he would be on remission.

When he sought a second opinion in Singapore in 2007, his physicians discovered his cancer had metastasized to his heart, lungs and throat. They were inoperable, he was told, so his only treatment option was target therapy. Doctors gave him six months to live, and maybe over a year if the medication worked.

‘Your will be done’

“I said, God, Your will be done,” Joseph recalled. He didn’t bargain with his Maker, he never asked, “Why me?” He had been smoking on and off for several years, he said, and had no one to blame but himself.

He took a long look in the mirror and psyched himself to quit smoking.

“The cause was my cigarette-smoking habit. I could not blame the Lord. I only prayed to be given a chance to see my son, River, graduate from high school.” Joseph was in his 50s at the time. (River is now a college junior.)

Since his diagnosis, Joseph had undergone 19 operations. Even his nose had three tumors. Just last year, at 69, he went through gamma knife radiation. Gamma knife is a very precise form of radiation therapy that uses intense beams of gamma rays with pinpoint accuracy to treat lesions in the brain.

It was a two-hour procedure that necessitated “screwing” his head against metal to avoid accidental movement. It was done without anesthesia, while he was fully conscious, so the stiff neck from lying still was almost unbearable.

In those moments of excruciating pain and utter discomfort, Joseph believed he saw his dead relatives—his mother, his father, his aunts, his grandparents.

“They were calling me. They were waiting for me. I started praying,” he said. “Then all of a sudden I felt an arm—it was a man’s arm. I was trying to smell him. Is this Jesus? I felt comfort with that touch.”

His numerous charities and projects, including leading a recent campaign, Save Manila Bay, have kept him going.

“This gives me a purpose. You have to have a grateful heart. Every day is a special day. You cannot be positive without being grateful,” he said. “You have to do with passion the things that you like to do.”

A few years ago, Joseph’s son in the US met a tragic death. He fell from a six-story building. The cause of death remains undetermined.

To help him cope with the devastating loss, Joseph put up a chapel in San Jose, Batangas, which he thought his son would have loved. Joseph was raised a Catholic and went to Catholic school, but it was only after his cancer diagnosis that he developed a relationship with God and Mama Mary.

(“I was very naughty,” he said. Joseph enjoyed the life of a successful bachelor for many years before settling down to raise a family.)

He prays the rosary once a day and goes to church every day: “Mama Mary gave me the miracle of hope.”

Today, Joseph makes time for tai chi thrice a week. He has suffered excess muscle atrophy and continues to do physical therapy. He is regaining his strength and is now a gym rat at 70.

“When I started, I couldn’t carry three pounds of weight. Now I can lift 12.5 kg,” he said, proudly.

“If there is any load that you cannot handle, give it to the Lord. Be patient; be prayerful. You have nothing to lose.”