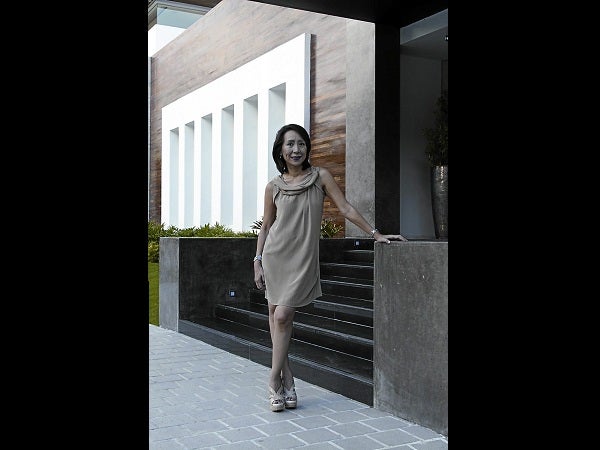 While everybody, or mostly everybody, will celebrate or pine for romantic love on V Day, last week we witnessed a more reliable kind of love: the love of friendship that spans a lifetime.

It was at the wake of young architect Maggie Go, daughter to well-loved A-lister and social worker Aurora and businessman Henry, sister to fashion designer (ViseVersa)-turned-food entrepreneur (Nic’s Bakeshop) and Lifestyle columnist Rina, and friend to me and Auggie Cordero.

Maggie had a seven-year fight with skin cancer. When she was diagnosed of it in 2004, the prognosis was dire, but she and her family, led by her mom, assiduously and methodically sought a cure, trying one medical option after another. Her body took some beating—successive surgeries one almost lost track of. In the meantime, Aurora herself fell ill and it fell to Rina and the rest of her family to help Maggie oversee her anti-cancer strategy.

Through all this, however, it wasn’t the ailment which made an impact on you; it was Maggie’s infectiously good and happy heart. She continued to live—and enjoy—her life.

An architecture graduate of Rhode Island School of Design in the US, Maggie had a relatively thriving career designing homes and retail establishments (the Kenny Rogers chain, for example). She continued that career through her battle with cancer. It impressed her clients that not only was she a good architect, she also had a fine eye and exquisite taste. In Maggie, architecture and class fused potently and seamlessly.

She worked but also enjoyed her friends and lifestyle—from diving to tennis, dining out, shopping. It made your heart swell to see, beside her urn at the wake, a blown-up image of Maggie waving from a seat at the Indian Wells tennis tournament in California last year where she rooted for her idol, Rafael Nadal. Indeed, cancer didn’t stop her at all. She fought a good fight.

It was as if the more awesome the tragedy that struck her and her family, the more positive her outlook became. She had a kind attitude to life, even if in recent years life hadn’t been as kind to her. While you might envy her charmed life as a child and young adult, you could also learn from how, in later years, she rolled with the punches—with grace.

While we all have friends we bond with through life, still it was amazing to see, at the wake and the internment Mass, how Maggie had nurtured friendships through life’s final stretch—from childhood.

Her childhood barkada wasn’t only at the wake to help Rina handle the arrangements, they had been with her, as it turned out, in every phase of her fight with cancer, one of them even temporarily leaving her family in the US to see Maggie through her treatments here and in the US. They were around her up to the hour she breathed her last and her remains turned into ashes at the crematorium.

They were Maggie’s bridesmaids in her wedding a long time ago; they were also her pillars as she lay dying. Each of them spoke at the final Mass for her, each one’s grief so palpable, yet no greater than the love they professed for their departed friend.

Chiqui recalled how even through her ailment, Maggie “led the way” for the group, even through fitness regimens. In the hospital, the nurses would sometimes mistake Chiqui for the patient Maggie, who typically wasn’t on her hospital bed. Marissa spoke of their togetherness through loves gained and lost. Pilar talked of how their friendship evolved through life’s stages—from the kitchens of their childhood to the medical diagnoses that tested their faith. Pilar, who also had her own challenging ailments, quoted Maggie’s oft-repeated mantra: “Let God do the rest.” Florina, who practically acted as Maggie’s caregiver in her final years, spoke of how their ailing friend became, ironically, their source of strength—and laughter.

“Maggie was the ultimate fighter. Like her idol Rafa (Nadal), she’d say ‘Vamos!’” they recalled.

Ito Feliciano, one of her dear guy friends, spoke of his “Maggie moments”—“I found my soul mate in her, and that’s a rare blessing,” he said. Gigi Buenaventura-Perrett, widowed herself, spoke of her fond thought that Maggie is up there with her other loved ones.

As Maggie’s brothers Kenneth and Francis sat composed and calm, her eldest brother Jeff spoke of their love for their sister and expressed the family’s gratitude for the care and devotion of friends.

Like her final vigil in the funeral home, her church rites brought together generations—her parents’ and hers—of ties that have endured: Judy Roxas, Maridol Mabanta, Sari Cojuangco, Raul and Menchu Concepcion, among others, of her parents’ generation, to the generation in between (Frederick Dy, Jeannie Goulbourn who’s a relative), to Maggie’s and Rina’s generation (Frances Lim, Mark and Sandy Higgins who are kin, Rina’s doctor-best friend Carmela Ongsiako who was in practically every medical meeting of Maggie, Liaa and Noel Bautista, Bledes Fores Legarda, Bernardine Siy Quiason, Mickey and Lizette Cojuangco, Joey and Marissa Concepcion, among others).

Maggie’s “DWR’s” couldn’t but remind one of Ann Brashares’ novel (turned into a movie) “The Sisterhood of the Traveling Pants” for its tenacity through time, except that in Maggie’s case, it isn’t fiction.

Sisterhood offers a unique kind of love which, if you’re lucky, you can experience even at least once in your lifetime.

Valentine’s Day should also be for such friendships. Sometimes romantic love is overrated; friendship is underrated. It’s the latter that usually helps prolong life.