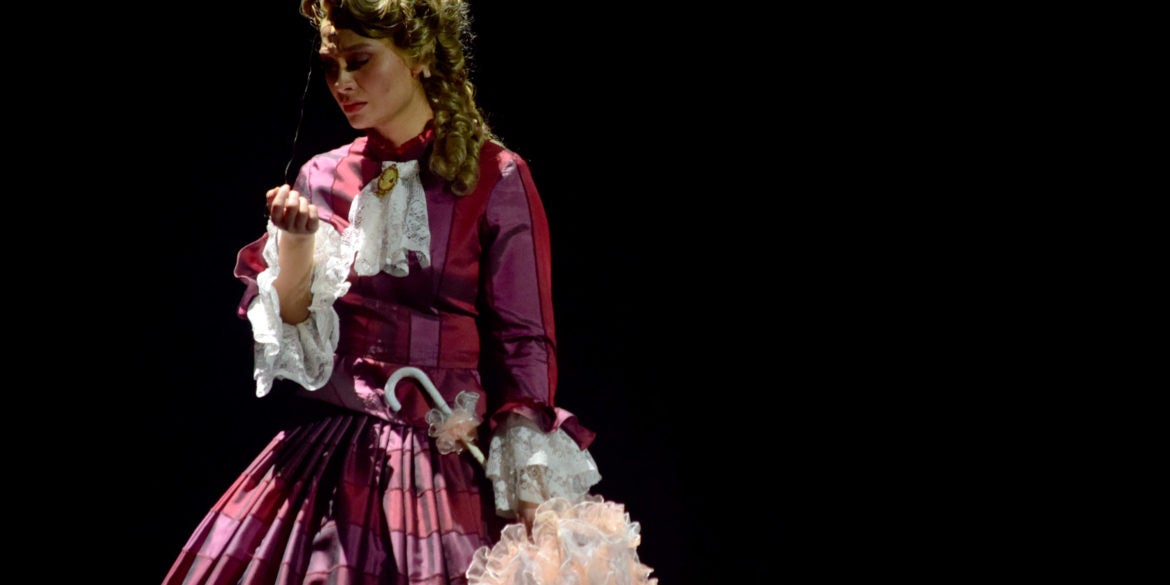 ‘Passion’ is a scintillating work of art

The key to unlocking James Lapine and Stephen Sondheim’s “Passion,” which director Robbie Guevara has summoned to superlative life for Philippine Opera Company, is in a lyric late in the musical.

The soldier Giorgio, his life unraveled, sings to the ailing Fosca: “Love within reason—that isn’t love.”

Now juxtapose that with his earlier rebuke of what he calls her “insatiable, smothering pursuit” of him: “Love’s not a constant demand; it’s a gift you bestow. Love isn’t sudden surrender—it’s tender and slow; it must grow.”

This plunge from reason to irrationality is the essence of “Passion”—what the American psychologist Robert Sternberg defined in his Triangular Theory as the maddening emotional and sometimes illogical component of love.

Such madness is ever present in Guevara’s staging of this musical, in which Giorgio, already the lover of the married Clara, is reassigned to a rural military outpost and finds himself the unwitting object of Fosca’s obsession. And out of madness, Guevara has fashioned a living, breathing, scintillating work of art—a production that illuminates extensively the work at hand, allowing the audience a deeper understanding of what they’re seeing and hearing, as only great theater does.

Among Sondheim’s works, “Passion” is perhaps the most difficult musically: Performed without intermission, it is almost sung-through, such that it is hard to differentiate where one quasi-operatic melody ends and the next begins.

But under musical director Daniel Bartolome’s baton, the score becomes an auditory knockout, and the singing in this production surely qualifies as one of the year’s most sumptuous and accomplished.

Even bigger of a triumph is the synergy between Guevara’s vision and his first-rate design team, how everything and everyone onstage looks and feels like they belong to the same make-believe world and exist on similar musical and dramatic wavelengths.

This “Passion” is a bizarre, bedazzling dreamscape come to life, thanks to Jason Tecson’s painterly set and Shakira Villa Symes’ ravishing play between light and darkness.

Most importantly, the twisted love triangle at the helm, too, comes across as cut from the same genius fabric.

The centerpiece is Shiela Valderrama-Martinez’s titanic, haunting portrait of tragedy as Fosca—desperation and alienation, the “other-ed” and the spurned all combined to create what is so far the year’s most breathtaking performance by an actress in a musical.

Opposite her, Vien King delivers this production’s curve ball turn as Giorgio, his character’s onstage journey undertaken so convincingly with admirable restraint. And Jasmine Fitzgerald—like King, in only her first major stage role—is a stunning presence as Clara.

Side by side, King and Fitzgerald are a paragon of conscientious costuming (the drop-dead gorgeous gowns by Zenaida Gutierrez) and makeup (by Myrene Santos): They literally look like they walked out of an otherworldly painting.

Even the casting and attack to the characters work in ways that subvert expectations. King’s Giorgio, for instance, isn’t some strapping, debonair soldier, but almost an adolescent—lustful and lost, his emotional turmoil between Clara and Fosca—and ultimate undoing by the latter—therefore, made more believable, if not inevitable.

And as the outpost commander, Raul Montesa, through sheer quiet, elevates what could potentially be a wallflower supporting part into this production’s most convincing inhabitant.

The key to this production, then, lies in how it alternates between quiet and noise—between deafening silence and the overwhelming rush and surge of feeling through song. It is its title, after all.

This “Passion” isn’t mere by-the-books chamber opera; it is its love triangle made manifest—it creeps on you like subtle sickness, until you are completely in its thrall, unable to look away yet also unable to resist looking. —CONTRIBUTED

“Passion” runs until Sept. 29 at Carlos P. Romulo Auditorium, RCBC Plaza, Makati City, with performances on Friday-Sunday at 8 p.m. and Saturday-Sunday at 3 p.m.