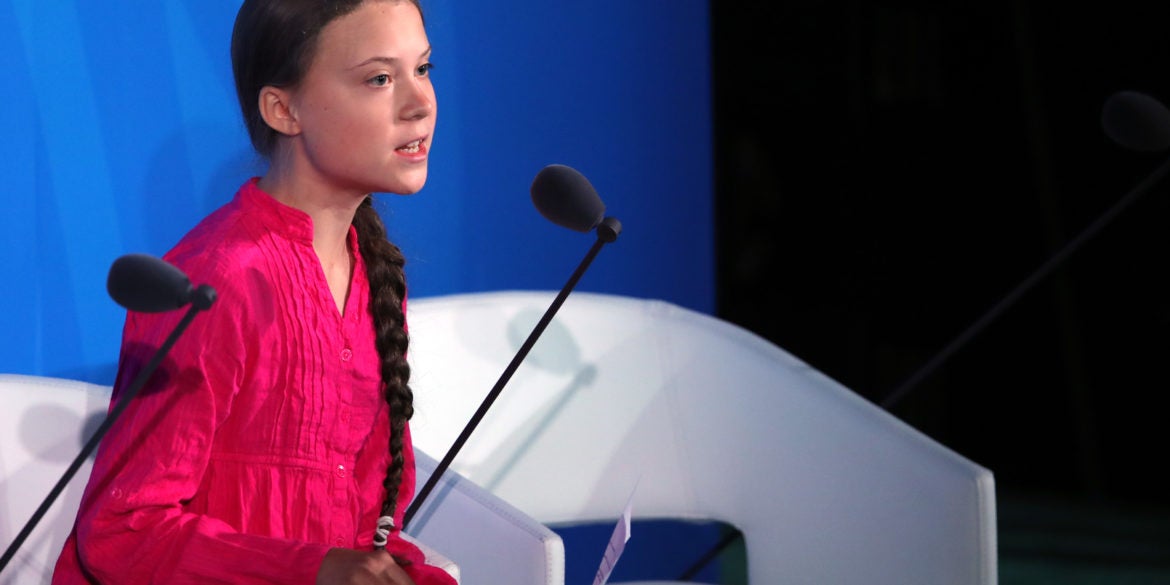 NEW YORK, NEW YORK - SEPTEMBER 23: Greta Thunberg speaks at the United Nations (U.N.) where world leaders are holding a summit on climate change on September 23, 2019 in New York City. While the U.S. will not be participating, China and about 70 other countries are expected to make announcements concerning climate change. The summit at the U.N. comes after a worldwide Youth Climate Strike on Friday, which saw millions of young people around the world demanding action to address the climate crisis. Spencer Platt/Getty Images/AFP

“Her resolve to not put up with the looming climate disaster has inspired millions of peers to also raise their voices and demand immediate climate action,” it added.

Thunberg’s global climate movement “Fridays for Future” began in August 2018 when she started sitting alone outside Sweden’s parliament with her now iconic sign reading “school strike for the climate”.

The message has struck a chord with youths around the world. Last Friday, an estimated four million plus people took to the streets in over 150 countries to join the “Global Climate Strike” protest, demanding action from politicians against climate disaster.

This year’s Right Livelihood Award also honours three others, including Sahrawi human rights activist Aminatou Haidar “for her steadfast non-violent action, despite imprisonment and torture, in pursuit of justice and self-determination for the people of Western Sahara”.

Lawyer Guo Jianmei received the award for her “pioneering and persistent work” for women’s rights in China.

The Brazilian Hutukara Yanomami Association and its leader Davi Kopenawa were also honoured for their “courageous determination to protect the forests and biodiversity of the Amazon, and the lands and culture of its indigenous peoples.”

The Right Livelihood Award was created in 1980 by Swedish-German philatelist Jakob von Uexkull after the Nobel Foundation behind the Nobel Prizes refused to create awards honouring efforts in the fields of the environment and international development.

The award consists of a cash prize of one million Swedish kronor ($103,000 or 94,000 euro) for each laureate, meant to support the recipient’s work.