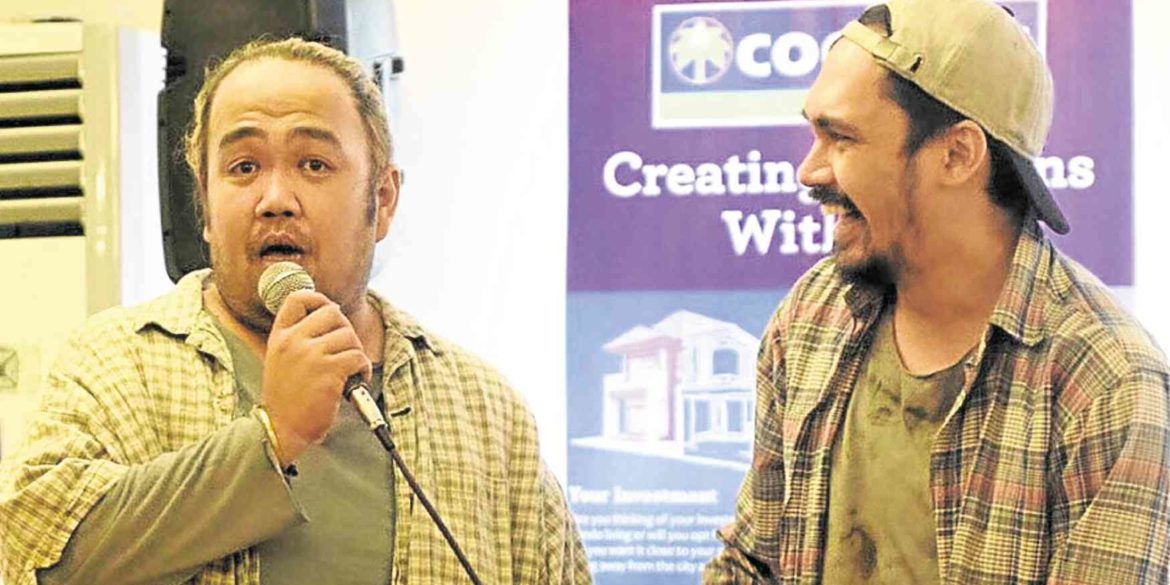 Jonathan Tadioan and Marco Viaña, the leading men in Tanghalang Pilipino’s (TP) “Katsuri,” mirror the dynamics between their respective characters: the mentally challenged but hulking Toto; and his smarter, if insecure, best friend George.

Like their characters, the actors look different from each other at first glance, but they share similar career trajectories, influences and aspirations.

For years, they’ve landed coveted roles—to positive reviews—but given a choice, they’d rather be known as solid character actors than as leading men.

Tadioan infused shades of gray into the villains he has portrayed: the relentless, fanatical judge in TP’s “Ang Pag-uusig”; Arthur Miller’s “The Crucible” in Filipino; the obsessed wife-killer in the 2011 Virgin Labfest’s “Evening at the Opera”; and just recently, the corrupt, if paternal, councilor in Full House Theater Company’s “Ang Huling El Bimbo.”

This heart-wrenching tale of friendship, prejudice and the price of ignorance is a collaboration between director Carlitos Siguion-Reyna and his wife, playwright and actress Bibeth Orteza, who sets the play in modern-day Bacolod, in a community of sakada fighting against oppressive landowners.

This time, despite his intimidating physicality, Tadioan plays the underdog. His Toto (Steinbeck’s Lenny) can very well have an autism spectrum disorder. While the townspeople alternatively mock and fear him, the actor says he plays him as “a 3-year-old in the body of a 40-year-old man. May sarili siyang mundo, pero maganda ang puso niya.”

Viaña’s George, Lenny’s protector, is more reserved when it comes to fighting for their rights. The actor explains his approach: “The American farmers in Steinbeck’s work were more aggressive, but the sensibilities of our sakada are different. George, in this type of setting, would have to hold himself back.”

Viaña says his temperament is closer to George, compared to other characters he has played. He’s not the vocal type in real life. The one exception was when he literally fought with his mother over his career choice about 10 years ago, when he chose theater instead of pursuing a career as an engineer.

Back then, he had just graduated from Mapua University with an engineering degree—a concession to his parents who wanted a more stable career for their son.

Tadioan’s initial career path was closer to theater—he took up broadcast communications at Far Eastern University with the goal of becoming a TV news anchor. Acting was a hobby, but upon a professor’s advice, he auditioned for AC and passed, but entered only the following year, as he had to finish college first.

Preparing for a role

To prepare for a role, Tadioan would sometimes sit on a bench or walk around a mall for hours, observing people and taking notes. He would study “how they walked, talked, what they ate and bought,” he says.

Such observations came in handy when he had to exude a patriarch’s maturity as Willy Loman in TP’s “Pahimakas sa Isang Ahente,” Miller’s “Death of a Salesman” in Filipino. “He’s a 63-year-old man. My number one problem was I did not have his wisdom,” Tadioan says of what he considers one of his most challenging roles to date.

For Viaña, playing the conflicted Reverend Parris in “Ang Pag-uusig” was the turning point that removed him from his comfort zone. He had to leave his “nice guy” characters to become the catalyst of distrust among his own flock.

He thought of his character as “the protagonist, and not just a supporting character, in the drama.”

Tadioan and Viaña consider veteran actors Teroy Guzman and Nonie Buencamino as major influences, whom they would love to perform with, one-on-one, in the future.

As for dream roles, Viaña’s is Hamlet, while Tadioan says he will break his character-actor rule to play his all-time favorite part, the romantic Cyrano de Bergerac.—CONTRIBUTED