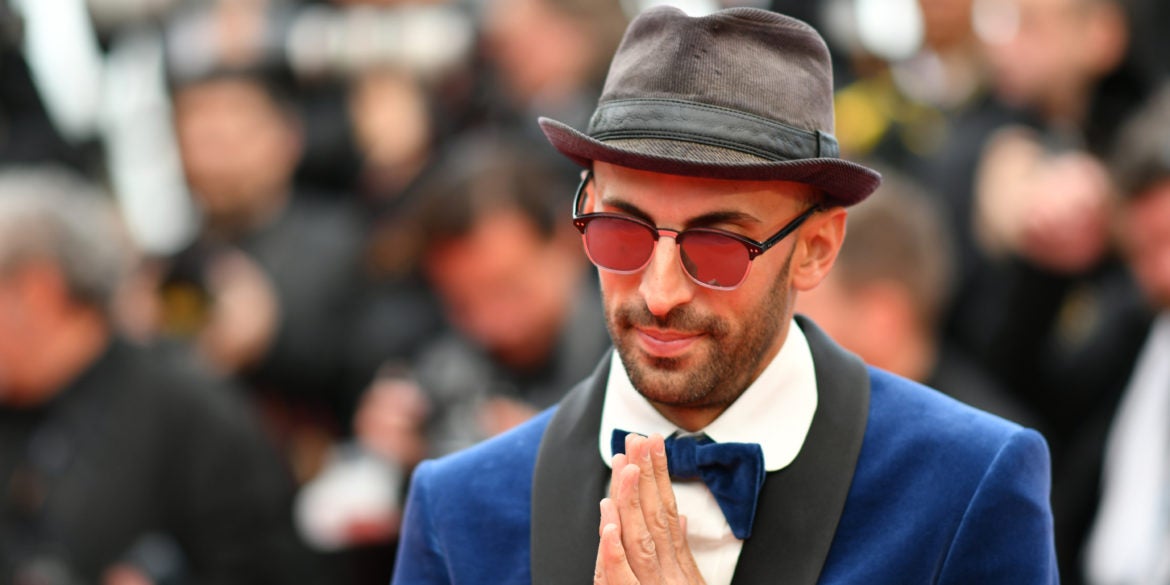 French photographer JR poses as he arrives for the screening of the film "Les Miserables" at the 72nd edition of the Cannes Film Festival in Cannes, southern France, on May 15, 2019. (Photo by Alberto PIZZOLI / AFP)

An urban artist whose snapshots of anonymous individuals have made him a global celebrity, French photographer JR presents a retrospective of his grand vision on Friday in New York, his first major show in North America.

The selection of his pieces spanning two decades, by no means encompasses the entirety of his vast oeuvre — but it offers an invaluable insight into his unique perspective on the impermanent, transitory nature of existence.

“From the beginning, as someone who works in the ephemeral, outside, I’ve always tried to document in order to preserve a trace,” JR told AFP ahead of the launch of “JR: Chronicles,” on display at the Brooklyn Museum for the next seven months.

The exhibition showcases some of his black-and-white photographs alongside color images of the photos in-situ, being enjoyed by the public on the streets.

“These traces, gradually, have become sometimes more interesting than the outdoor projects because they show how people have reacted to the installations,” JR said.

“It gives the temperature of a place, almost like a sociological study of different contexts in which I can install these works.”

An enigmatic master of spectacle whose work delights Instagram, JR demonstrates in his retrospective that he is an artist with genuine depth beneath the shiny surfaces.

From photos plastered on walls around Paris to an enormous fresco representing more than 1,000 New Yorkers, “all of these projects are linked to each other,” said the artist, sporting his signature hat and black sunglasses.

“The best thing about my street art is that it encourages people to meet,” added the 36-year-old, who has been working at his craft for 20 years.

Since the beginning of his career, when he photographed youths in the tough Parisian suburb of Clichy-sous-Bois, JR has been inclined to remain in the shadows, allowing his subjects the limelight that many artists crave for themselves.

In projects such as “Women are Heroes,” “The Wrinkles of the City” and “Inside Out,” he showcases “the invisible” — often giving voice to the voiceless, and shining a light on those who walk through life largely unnoticed.

“I’ve been living in New York for nine years and presenting my work for the first time like this is an incredible blessing,” he said.

The show, which bears a similarity to a recent exhibit at Paris’s Maison Europeenne de la Photographie, belies the wider public’s perception of JR’s oeuvre.

In addition to photography it features videos, montages and animations, and visitors can download a smartphone app with video explanations of his projects.

“We decided to create an exhibition that focuses very specifically on his collaborations with communities and picturing communities,” said Drew Sawyer, who curated the show with Sharon Matt Atkins.

“By focusing on his community collaborations, it really gets that point across.”

JR’s flirtation with different media has made it possible to take his street art — he recently showed a giant photo of a child looking over a wall at the US-Mexican border — into museums and galleries.

From Rio to the Louvre, JR thinks big, with concepts that take considerable preparation.

Though he’s far from his days as a teenage graffiti artist, the multimedia boundary-pusher says the way he works “hasn’t really changed.”

JR has already started to work on other projects, including one in an American prison that came together just a few days ago.

He says a frenetic workflow, made possible by efficient printmaking techniques and relying on a small team, is the reason he has been so prolific for so long.

“It permits me to continue to work like I’m 16 years old,” he said. “To decide on a whim to go work on one street or another.”

Cover image: French photographer JR poses as he arrives for the screening of the film “Les Miserables” at the 72nd edition of the Cannes Film Festival in Cannes, southern France, on May 15, 2019. (Photo by Alberto PIZZOLI / AFP)