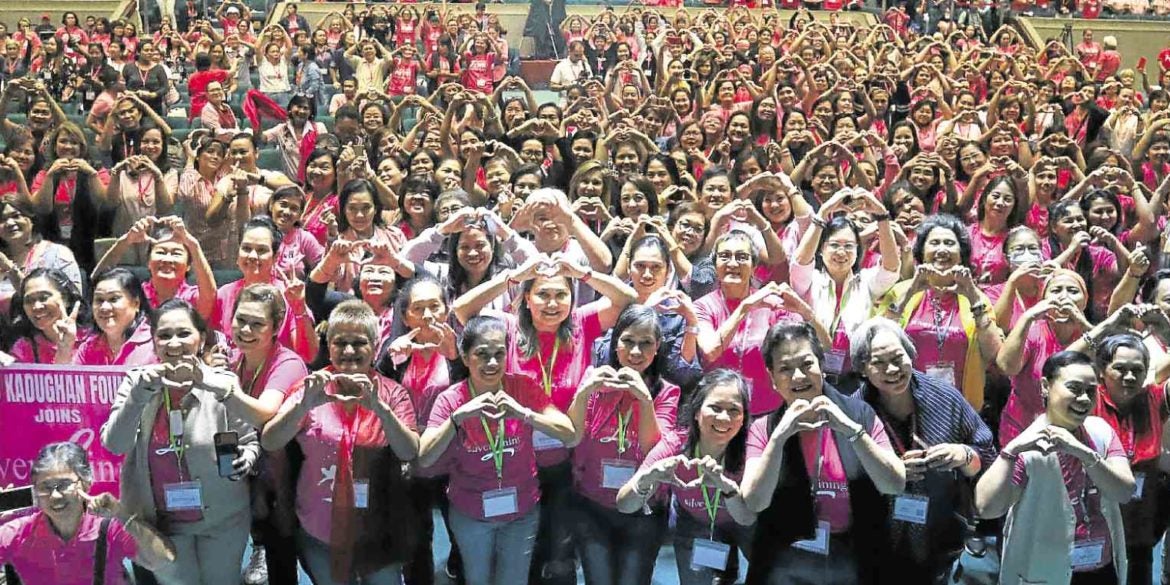 ‘We knew for certain: No one should be alone. Or scared. Or embarrassed. Or unsure’

As RockEd founder Gang Badoy said in her talk on healing through writing, “I’ve never seen so much pink in one place! Ang saya-saya!”

Gang was one of several people—experts, doctors and lay advocates—who led breakaway sessions during the fourth Silver Linings, the grand summit and “homecoming” event for breast cancer survivors.

Staged by the nongovernment organization ICanServe, which also turned 20 this year, the event at the Philippine International Convention Center (PICC) in Pasay City last Sept. 28 was everything it was expected to be—heartbreaking, hilarious, and shot through with hope of women who had fought or were still battling this disease.

Registration began at 8 a.m. outside the PICC’s Plenary Hall. Things started on a high note with prayers, a rousing entrance by host and survivor Bibeth Orteza, a hilarious song and spiel by Mitch Valdes talking about her first mammogram, and opening addresses by ICanServe founders Kara Magsanoc-Alikpala and chair Crisann Celdran.

Orteza paid tribute to ICanServe mavericks who had passed on, such as board member Lani Eusebio, and just weeks before Silver Linings, Pamsy Tioseco and Lian Chua.

Crisann recalled how, 20 years ago, as a scared newlywed diagnosed with Stage 3 breast cancer, she felt alone and did not know who to call.

“But all that changed quickly,” Crisann said. “Strangely, the ugliness of a cancer diagnosis brings this beautiful ripple effect where people start coming, and calling, and lending their ears… As survivors we knew for certain: No one should be alone. Or scared. Or embarrassed. Or unsure.”

Certainty and fortitude are indeed essential in facing the future with this disease: Kara cited World Health Organization statistics predicting that “in the next 11 years, cancer incidence will increase by 80 percent.”

After the opening, attendees proceeded to several breakout sessions in different rooms at the PICC. Having survived breast cancer and depression, I was asked to talk on dealing with both.

My teammate was a young psychiatry resident at Makati Medical Center, Dr. Justin Aquino, who made an interesting distinction between normal sadness and the “bleakness” of clinical depression. He also got recruited by the speaker preceding us, Malaysian breast cancer advocate Ranjit Kaur, when the issue of emotional health came up during her talk on coping with the disease.

There was cancer survivor Fr. Jerry Orbos’ well-attended talk on spiritual healing. Ranjit returned with Dr. Mae Corvera and 12-year Stage 4 survivor Marivic Bugasto for a session on living with a Stage 4 diagnosis.

In an emotional, packed session, writer and motoring advocate James Deakin, psychologist Sigrid Perez, and actors Tirso “Pip” Cruz III and Cherie Gil talked about losing someone to cancer, or living with a loved one with the disease.

Pip cried unabashedly from the beginning as he spoke about losing his son Teejay to cancer in 2018. “Grief is the price of love,” he said.

At 4 p.m., everyone reassembled in the Plenary Hall for closing activities. “We shall continue to be truthful to the name by which we are known and called, that is to be of service,” said president Nikoy de Guzman.

As she has faithfully done for the last 20 years of ICanServe events, gifted singer Bituin Escalante brought the house down with a medley of songs, concluding with the group’s unofficial anthem, “I Will Survive.” Young and old, big and small, in remission and still fighting, we all danced—because we were all happy to be alive.