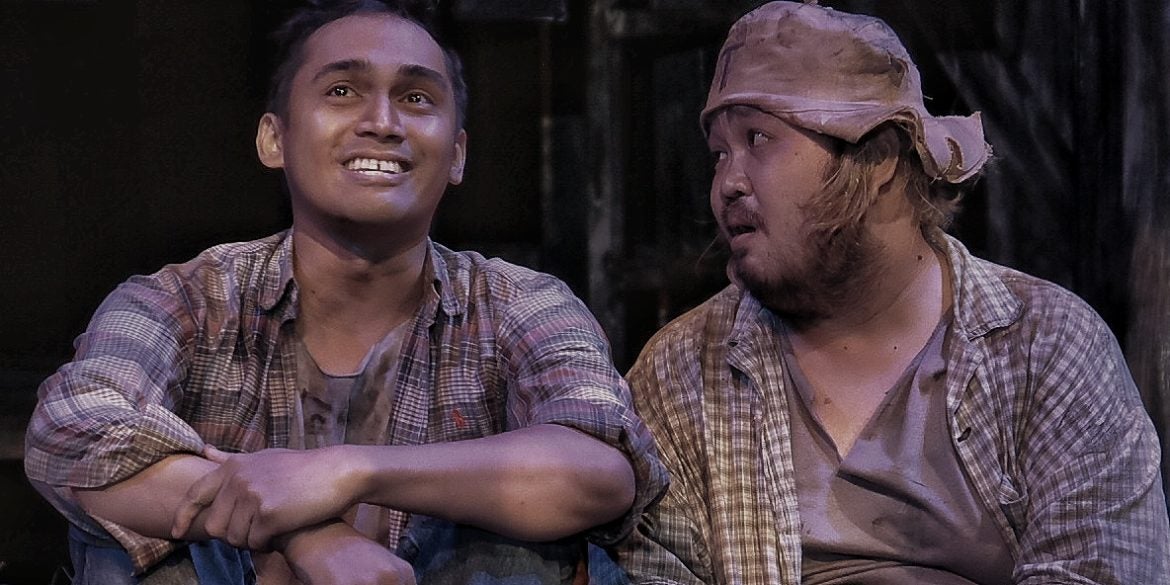 ‘Katsuri’: The triumph of acting

In the struggle for social justice, even art must be held accountable to its own form of moral responsibility

Tanghalang Pilipino’s “Katsuri,” directed by Carlitos Siguion-Reyna, transplants the farmhands of John Steinbeck’s “Of Mice and Men” from the American Great Depression to the “howling wilderness” of present-day Negros Island, where, in the last three years, over a hundred individuals—including farmers, lawyers and left-wing advocates—have met their violent ends, often in the hands of unidentified assailants.

This daring change in milieu is praiseworthy: Theater can and should be instrumental in scrutinizing the moral deficiencies that have become emblematic of the Duterte administration.

But it is this very milieu in which “Katsuri” flounders. What Bibeth Orteza’s Filipino-Hiligaynon adaptation fails to establish adequately is the climate of fear that must pervade this “howling wilderness,” now downscaled to the plantation where George and Toto (Steinbeck’s Lenny) seek employment.

Either that, or the point seems to be the normalization of murder in this landscape of perpetual poverty, in which case the play similarly stumbles.
Specter of death

The figure of an armed, masked man hounds the opening scenes (and some others) like a specter of death. An orating counselor is felled by a gunshot. Yet life goes on, the characters seemingly unflustered, if not unaffected, by the carnage.

Further along, another shot rings, and one character (whose dog is supposedly the bullet’s recipient) says, in obvious denial: “Magsasaka naman ’yun, hindi aso, ’di ba?”

None of that adds up to a coherent make-believe world. Blood-soaked Negros is merely convenient setting—placeholder for the urgent “now,” but inconsequential to this supposed adaptation.

And convenience should never be the end point: In the struggle for social justice, even art must be held accountable to its own form of moral responsibility.

The problem is that Steinbeck never had to deal with the added burden of portraying the vastly different plight of the sakada. His farmhands roamed the country because that was the era of migrant work.

Orteza, meanwhile, drags the sakada into the picture, even the “nanlaban” phenomenon of extrajudicial killings, but disappointingly defers to Steinbeck in the end.

The more you think about “Katsuri’s” ambition, the more the writing’s faults come to light.

For instance, George and Toto—burly, blundering, incapable of blending with any crowd—supposedly escape from Hacienda Luisita because of rape allegations, and manage to reach Negros completely unhampered—under this government of heavy policing?

Unable to trust the viewer to get the moralizing points, Orteza busies her script with motherhood statements, foreshadowing set up to a shine, glaring violations of the cardinal rule of “Show; don’t tell.”

We can also do without the Hiligaynon interjections since they never feel organic in the way that the language is vital to Glenn Sevilla Mas’ “Games People Play,” or Bisaya is to Alexandra May Cardoso’s “Ang Sugilanon ng Kabiguan ni Epefania.”

Still, that “Katsuri” ends up a gripping two-and-a-half hours is only testament to the superb ensemble playing—never mind that individually, some performances are stained with showy artifice. If only for the deeply entwined turns of Jonathan Tadioan as Toto and Marco Viaña as George, a ticket should be warranted.

Tadioan gets the showier part, what film parlance would call Oscar bait—a role, in this context, imbued with an obvious defect, it would be hard not to notice when done really well.

And Tadioan does Toto’s mental disability really, really well; the unwavering consistency of his technique is astounding. (That the role is written in monotone is a different story altogether.)

But Viaña—upon his mighty shoulders rest the weight of this story, its moral fulcrum, and the gravity of George and Toto’s actions (both intended and accidental). His journey, from loyal friend in search of safe pasture to tired farmhand eager to blend in and ultimately to hand-of-God who decides who gets to be men and who gets to be mice, is a peerless triumph of acting. —CONTRIBUTED