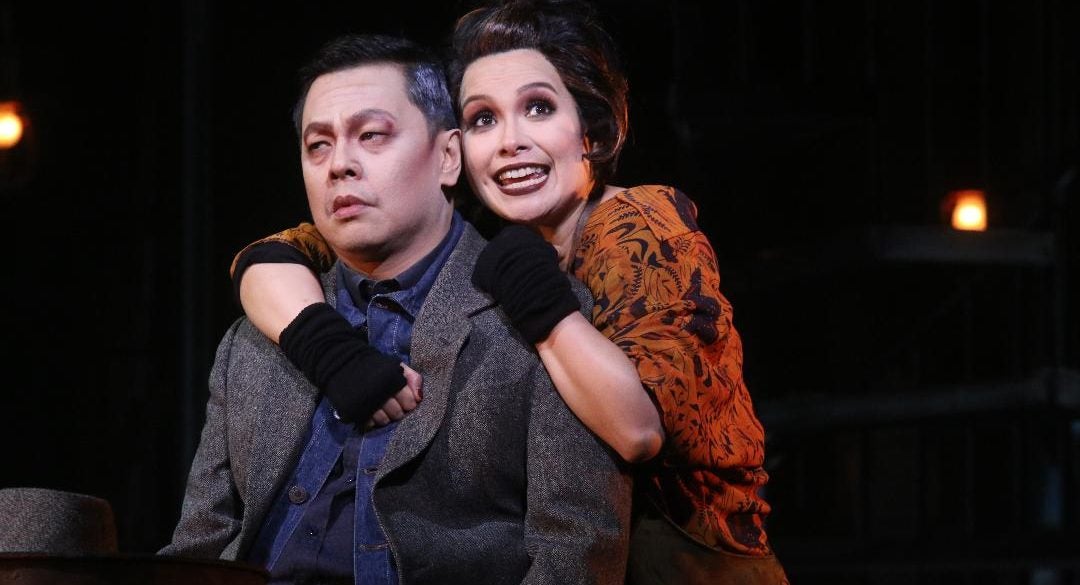 ‘Sweeney Todd’: Bobby Garcia’s reinvention of the musical a triumph of vision and staging

The production throbs with muted rage. Jett Pangan simmers; Lea Salonga is the explosive fire underneath

That’s the title of the tongue-twisting Act II opener of Stephen Sondheim and Hugh Wheeler’s “Sweeney Todd: The Demon Barber of Fleet Street,” but it may as well be a blurb for director Bobby Garcia’s dimension-defying reinvention of the musical for Atlantis Theatrical Entertainment Group.

A mark of a true masterpiece is its malleability to interpretation without losing its genius. And across four decades, “Sweeney Todd”—which Michael Billington called “Sondheim’s dark masterpiece” in The Guardian—has been dissected every which way, from John Doyle’s 2005 Broadway revival that transplanted the story to a lunatic asylum, its actors doubling as musicians; to the latest Off-Broadway incarnation that repurposed its venue into an actual pie shop.

But Garcia focuses neither on the Grand Guignol theatrics that this tale of a barber who bakes his customers into pies has become identified with, nor on fulfilling orthodox expectations of a “Sweeney Todd” set in what the lyrics call the vermin-infested “great black pit” of Victorian London.

Instead, he has set his sights on finding that elusive sliver of sanity amid the deafening madness.

His “Sweeney” is no primal scream, but a prolonged, muffled psychotic breakdown, unraveling on the derelict, multi-story car depot designed by David Gallo and lit with masterly exactitude by Aaron Porter, this industrial decay a magnified stand-in for the state of mind of its leading characters.

Eschewing spectacle, Garcia has zoomed in on the human-sized psychodrama at “Sweeney’s” core, allowing his production to throb with muted rage.

This rage finds its center in Jett Pangan’s Sweeney, around whom Garcia has wisely spun and scaled down his production.

The whole conceit makes sense: While Pangan doesn’t quite achieve the level of monstrous terror that’s become synonymous with the character’s monumental Act I breakdown, “Epiphany,” his interpretation is of a piece with the show’s vision.

Pangan’s Sweeney pulses with a cracked man’s soul, his madness just beneath the skin, surfacing every now and then.

It makes sense that he, as with the whole cast, should be dressed by Rajo Laurel in clothes that look pretty normal at first, until you start noticing the tiny jarring details and intentional mismatches.

Pangan also delivers Sondheim’s wickedly tricky score with remarkable clarity—a skill he shares with Lea Salonga, whose Mrs. Lovett, a delirious hurricane of deviousness and devilry, sprinkled with lust, is one of the most accomplished stage creations we’ve seen this year and surely qualifies as a career high for the actress.

Pangan simmers; Salonga is the explosive fire underneath.

Clarity can very well be this production’s calling card. You hear it in Gerard Salonga’s musical direction of the ABS-CBN Philharmonic Orchestra, in Justin Stasiw’s sound design, and in the seven-person ensemble’s deft handling of their characters and harmonies. Sondheim has probably never sounded this good nor precise hereabouts.

You wonder, in fact, how Gerald Santos’ lost-boy attack on the sailor Anthony, or the too-aseptic Toby and Beggar Woman of Luigi Quesada and Ima Castro, respectively, could have found their way into this production.

This “Sweeney” is, in the end, a triumph of vision and staging. See, for instance, how Garcia stages “Johanna”—considered one of Broadway’s finest love songs—with stark, revealing intimacy; how he plots Act I’s knotty quartet scene (“Kiss Me”/“Ladies in Their Sensitivities”), working with his designers to let Anthony and Johanna’s blossoming romance to float with urgency just above the Beadle and Turpin’s pairing; how the macabre humor of this most macabre of musicals actually—in more surprising ways than one—translates as humor.

We could go on, which is to say, this “Sweeney’s” gifts and virtues run aplenty, it leaves you hungry for more.
—CONTRIBUTED

“Sweeney Todd: The Demon Barber of Fleet Street” runs until Oct. 27 at The Theatre at Solaire, Pasay City; ticketworld.com.ph.