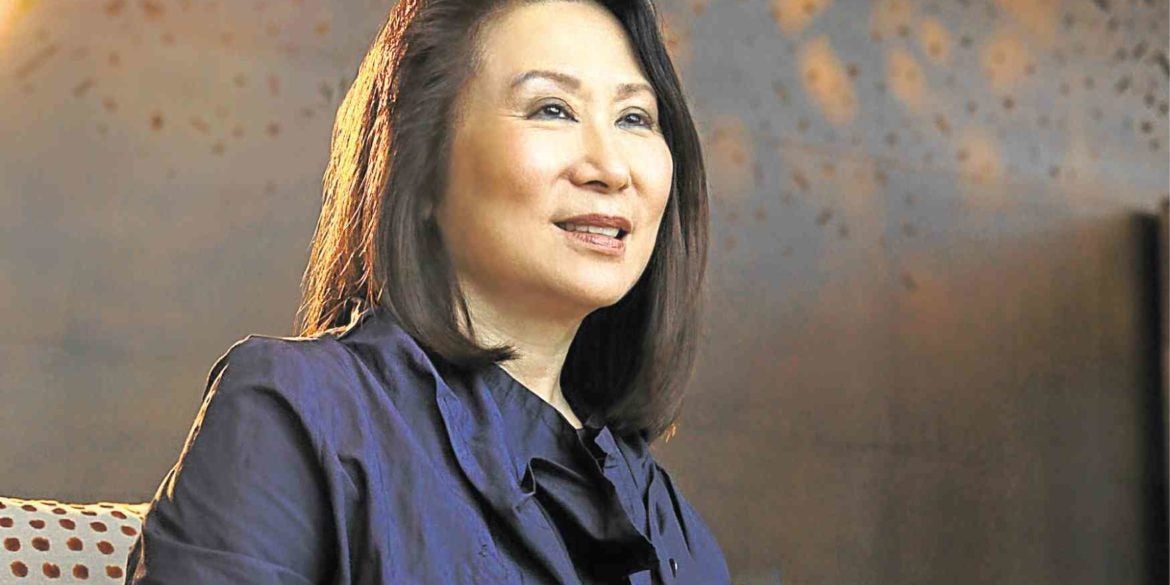 Elizabeth Sy: “Though it is an old structure, I was determined that it should not feel worn-out.”

How Elizabeth Sy pushes the envelope in hospitality and lifestyle

Understated elegance defined the look that the Grand Dame of Tagaytay, Taal Vista Hotel, picked for her recent 80th anniversary celebration. Tables at Taza, its 4-year-old farm-to-table restaurant, were decked with centerpieces of white flowers and lavender sprays, which set off the gold-rimmed china. Chamber music wafted through the air as guests enjoyed modern Filipino cuisine.

Elizabeth Sy gave the limelight for the most part to Peggy Angeles, SM Hotels and Conventions Corp. (SMHCC) vice president, who announced the company’s expansion plans: 15 more hotels and six more convention centers/trade halls in the next five years.

Second among the late visionary taipan Henry Sy’s six children, Elizabeth—“ETS” in the workplace—was her father’s choice to steer the family’s hospitality and services ventures. Friends say she is detail-oriented and has impeccable taste.

“My father saw that I was versed in lifestyle matters,” she recalled.

Henry Sy loved to visit the Tagaytay landmark from the time it was called Taal Vista Lodge. He would sit on the slope behind the main building, enjoying the view of Taal Lake and Taal Volcano.

The taipan acquired the hotel in 1988, when it was in the Development Bank of the Philippines inventory. As with all his businesses, he was soon running the hotel hands-on. In 1999, he decided that the place needed a major facelift and an upgrade.

He gave his daughter full authority over the renovations and reconditioning. Elizabeth had lived in Europe, where laws on preserving old architecture are famously binding. She retained the hotel’s original Tudor Revival structure even as she modernized the interiors. She hired a professional designer to “bring indoors” the majestic view of the volcano and lake.

From 1998 to 2007 and as part of the Investor Relations team of SM Prime Holdings, she joined annual road shows in the United States, Europe and Hong Kong.

“I met corporate investors and brokers on a regular basis, to discuss how SM malls were doing,” she said.

Henry Sy and his children discovered more opportunities in tourism. In 2008, SMHCC was formed to develop and manage hospitality and convention properties.

In 2010, SMHCC expanded its portfolio in Cebu with Radisson Blu, an upscale brand of the American multinational Radisson Hotel Group. The SM group would soon tap another market with the upper midscale brand Park Inn by Radisson.

Sy explained SM’s relationship with Hilton Worldwide and the Radisson Group: “Hotel operators, through the hotel general manager and the management team, set standards for running the hotels and provide technical know-how. They likewise guarantee access to a large trove of guests through loyalty programs. As a hotel owner, SMHCC supports operators by sharing insights into local business practices, and works with them to achieve more efficient operations and finance management.”

Not surprisingly, she attributes the company’s success to teamwork. “I constantly collaborate with my people, who have the knowledge and skills—I don’t have a monopoly on those abilities,” she insisted.

She makes sure every property observes the standards agreed upon. “My goal is to consistently provide service that would deliver total guest experience,” she said. “In fact, we sometimes exceed expectations. I keep pushing the envelope. For instance, we equipped all Park Inn by Radisson hotels with swimming pools—something not included in the brand amenities requirements. And Conrad Manila meets the LEED (Leadership in Energy and Environmental Design, the most widely used green building rating system in the world) Gold standard. That was not asked of us.”

Asked how she pushed the envelope for Taal Vista Hotel, Sy replied, “We constantly update and upgrade—just like in SM malls. Though it is an old structure, I was determined that it should not feel worn-out. It just looked really tired when we took over.”

Three years ago, the Taal Vista kitchen was renovated. Veranda, the all-day dining restaurant, got a sleek makeover in 2017.

Last year, the P145-million upgrade of the Lake Wing and the Ridge Rooms was completed. Rooms on the ground level, previously boxed-in, have been brightened up with light colors, expansive windows and balconies facing the volcano.

From the get-go, Sy insisted on using only the freshest locally sourced ingredients for its restaurants.

Taal Vista Hotel has come to be known for promoting local produce, such as tawilis from the lake, señorita bananas and pineapples. One of its bestselling desserts is halo-halo, whose ingredients are freshly made in the kitchen.

An avid gardener, Sy brought blue pea flowers to the hotel’s vegetable patch. These flowers were also used as ingredients for an award-winning cheesecake in a market basket-type challenge between Taal Vista and Pico de Loro.

An excellent cook herself, Sy has a hand in hiring executive chefs. For some of them, working in SM properties has become a fulfilling personal journey.

Jayme Natividad, now with Taal Vista after six years in other properties, said he learned a lot from the lady boss.

Sy recalled details in Natividad’s four-page resumé for his first job interview at Park Inn Davao, and a dish he concocted while there—Pasta de Davao, a melange of fresh tuna, roe, mussels and imbao or mangrove clam over fresh noodles.

Natividad mentioned that the boss finds time to attend food tastings and makes valuable suggestions on presentation. “She has experienced dining all over the world,” he said. “Plus, she knows how a dish should look. She has a good eye.”

When hiring a hotel general manager, Sy requires a balance of flair and financial savvy.

She explained, “My GM has to work well with both the management group and the owners. We, as a family, know how our hotels should operate—as an enterprise, not merely as a lifestyle showcase.”

When toiletries were being sourced for Radisson Blu, she herself canvassed prices. “The merchandiser in me kicked in,” she said. “It’s in my DNA.” —CONTRIBUTED