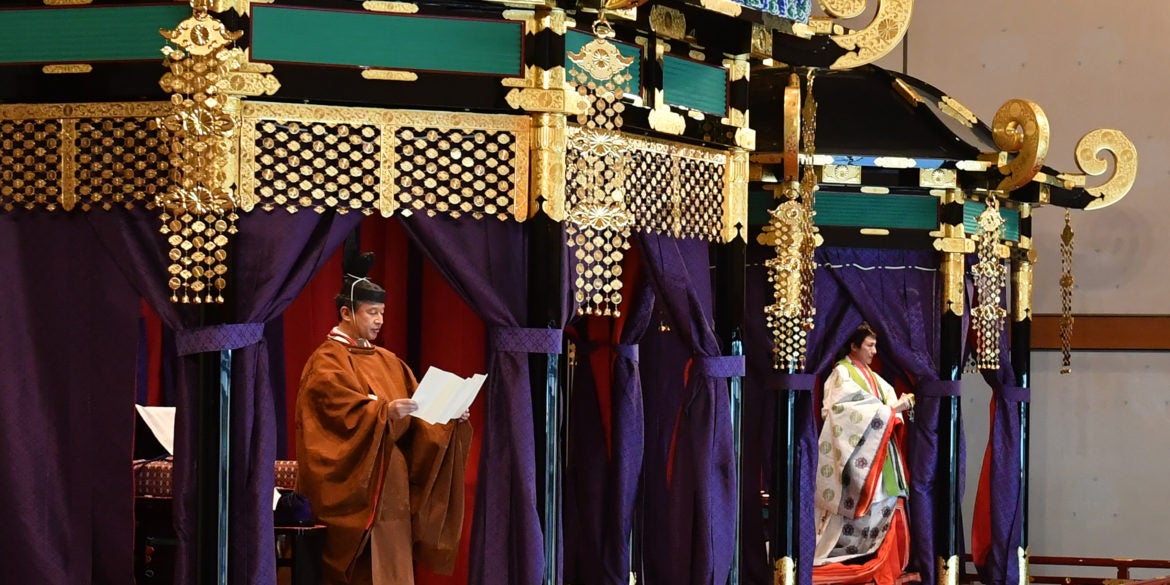 Emperor Naruhito (L) and Empress Masako (R) attend the enthronement ceremony where emperor officially proclaims his ascension to the Chrysanthemum Throne at the Imperial Palace in Tokyo on October 22, 2019. - Japan's new Emperor Naruhito completed his ascension to the ancient Chrysanthemum throne in a solemn, ritual-bound ceremony performed before hundreds of dignitaries in the Imperial Palace. (Photo by Kazuhiro NOGI / POOL / AFP)

The new emperor took the throne earlier this year after his father Akihito’s abdication, but the proclamation ceremony cements the transition in stunning style.

Here are some of the elements that will be on show:

The emperor and empress are each allotted an enormous throne, consisting of a relatively restrained seat set inside an elaborate canopy atop a fenced platform.

The emperor’s eight-tonne throne is called “Takamikura”, while the empress’s smaller “august seat” is known as “Michodai.”

The structures are made of lacquered cypress wood and were disassembled for transport from the ancient capital of Kyoto to Tokyo for the ceremony.

Underneath is a rectangular stage with low red fencing and side panels painted with legendary animals.

On the points of the octagonal roof sit golden phoenixes, with another larger version of the bird atop the roof’s peak.

To either side of the emperor’s chair are desks where a sacred sword and jewel, part of the imperial regalia, and seals will be placed.

But the emperor will not actually sit on the throne during the ceremony, remaining standing throughout.

For the ceremony, the emperor will wear a silk outfit in the “sokutai” or ceremonial style. The outfit is now rarely seen and is dominated by a voluminous draped brown-gold outer robe with long, wide sleeves and a cinched waist.

Royal attire often includes motifs of birds, as they were considered divine envoys in ancient times and the emperor’s outer garment is decorated with a mythical Chinese phoenix, believed to symbolise the arrival of peace.

During the ceremony, the emperor and other male royals will carry a “shaku” or sceptre — a narrow plain wooden plate not unlike a large shoehorn.

In the past, royals would sometimes attach “cheat sheets” to the back of the shaku to help guide them through complex rituals.

But the crowning glory of the emperor’s outfit is the kanmuri hat, which consists of a simple flat black base and a towering black tail at the back that extends upright 60 centimetres (about 24 inches).

Fit for an empress

Masako is expected to wear outfits with part of the rich red sleeves and bottom visible underneath multiple layers of varying lengths. Top layers will be light lilac and green shades with light purple lapels.

Masako’s hair will be sculpted into a style that sweeps up and out to the sides with a long ponytail extending from the back and a large golden hairpiece pinned above her forehead.

The elaborate traditional outfit, which can be hard to walk in because of its weight, is rarely seen outside imperial rituals and weddings.

The ceremony would not be complete without the presence of the “sacred treasures”. Japanese mythology has it that the sun goddess Amaterasu bequeathed the regalia to the imperial line two millennia ago.

The treasures are the “Yata no Kagami”, a mirror, “Kusanagi no Tsurugi”, a sword, and the “Yasakani no Magatama”, an unspecified jewel.

The possession of the “three sacred treasures” is considered crucial evidence of an emperor’s legitimacy, but there are no photos of them and even the emperor cannot see them.

The treasures were handed to the new emperor in the initial enthronement ceremony held on May 1.

During the upcoming proclamation ceremony, a replica sword and the original jewel will be brought in wrapped in cloth. Both are kept at the palace, along with a replica mirror that is not brought out for ceremonies.

Cover image: Emperor Naruhito (L) and Empress Masako (R) attend the enthronement ceremony where emperor officially proclaims his ascension to the Chrysanthemum Throne at the Imperial Palace in Tokyo on October 22, 2019. Japan’s new Emperor Naruhito completed his ascension to the ancient Chrysanthemum throne in a solemn, ritual-bound ceremony performed before hundreds of dignitaries in the Imperial Palace. (Photo by Kazuhiro NOGI / POOL / AFP)