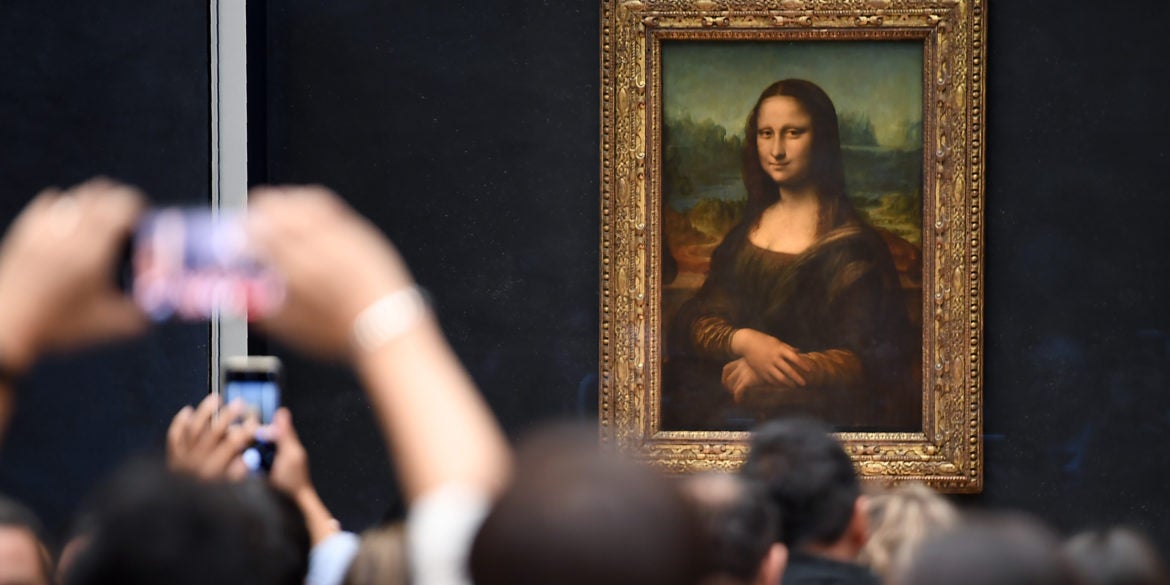 Visitors take pictures in frront of Mona Lisa after it was returned at its place at the Louvre Museum in Paris on October 7, 2019. - Leonardo da Vinci's masterpiece, the "Mona Lisa," returned to her usual spot in Paris' Louvre Museum on October 7 following a two-month renovation for the gallery housing the world's most famous painting. (Photo by ERIC FEFERBERG / AFP)

The Mona Lisa is a singular sensation at the Louvre’s upcoming retrospective of Leonardo da Vinci, starring in a virtual reality experience because she cannot appear in person.

Organisers of the blockbuster show featuring 11 of the Renaissance master’s paintings decided to leave the masterpiece in its usual home, the Salle des Etats, fearing crowd-control problems.

Instead, visitors can enjoy a virtual “tete-a-tete” with the 24-year-old wife of a wealthy Florentine silk merchant thanks to the immersion experience created by the Taiwanese firm HTC Vive Arts.

They should be prepared for a few surprises after putting on a headset and choosing one of several languages.

For one thing, what appears today to be the young woman’s hair is actually a gossamer veil — a symbol of virtue — covering a black cap, with just two tresses hanging down on either side of her face.

That explains the thin line at the top of her forehead — the front edge of the veil.

A woman of Lisa del Giocondo’s social status would never let her hair down like the trollop some said she must have been, and in the virtual reality film she puts a hand to her mouth at the thought.

The revelation comes through a deep dive into images made possible through ultraviolet and X-ray technology, revealing details of the layers upon layers of transparent glazes that Leonardo applied to the painting, creating the illusion of three-dimensional volume and bringing his subject to life.

The viewer will also be surprised to note that the young woman was quite svelte for a mother of five, a fact that is no longer apparent in the timeworn, heavily varnished painting, in which she appears somewhat plump.

The tour invites the viewer to imagine Lisa sitting on her loggia surrounded by the rugged landscape Leonardo used as the backdrop to convey unity between nature and humanity across the ages.

A dreamlike final 360-degree sequence takes the spectator up in a wooden flying machine imagined by Leonardo, soaring over the mountains and valleys of the painting.

A download of an extended version of the virtual reality experience can be purchased through VIVEPORT and other online platforms.

Cover image: Visitors take pictures in frront of Mona Lisa after it was returned at its place at the Louvre Museum in Paris on October 7, 2019. Leonardo da Vinci’s masterpiece, the “Mona Lisa,” returned to her usual spot in Paris’ Louvre Museum on October 7 following a two-month renovation for the gallery housing the world’s most famous painting. (Photo by Eric Feferberg/ AFP)